Lead With Your Hips in Diagonal Stride

Want to gain an inch or two every time you stride? Use your hips!

Unlike skate skiing, where the hips should be square to the direction of travel, in diagonal stride, the hips rotate with each stride. As Northern Michigan University Coach Sten Fjeldheim shows in the photos sequence below, the hips rotate to the front, bringing the leg and foot with it.

In the first image, Sten's right hip is forward and over the foot.

In the final image, the left foot is now under the forward left hip. 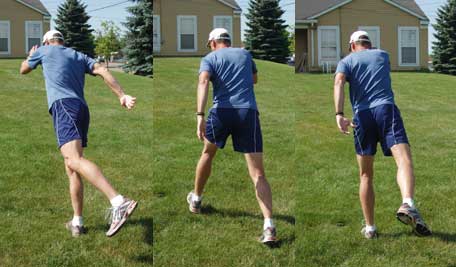 Think about leading with the hip. That little rotation will increase your stride length by an inch or two. Notice that Sten is not stepping up the hill, which would create a tendency to leave the hip behind the foot, but pushing the hip up the hill so that he maintains an optimal position over the ski for the kick.

You can practice this all year around - by ski walking (with or without poles), moosehufs, bounding, rollerskiing, and snow skiing. (Warning: because your "wax" never slips when rollerskiing, it can be very easy to be lazy and ruin your diagonal stride technique on rollerskis. If you're not a great strider, don't stride on rollerskis without a coach!)

Start practicing this now to ski faster this winter.

(Thanks to Sten for this tip from the June 2007 NordicSkiRacer Technique and Training Camp).