A quest for the perfect water bottle belt, Part 2

The first pretty water bottle belt I tried was another Ultimate Directions, the "Access Gel" (since replaced by a new model - thank goodness. More about that later). It seemed to have everything - a water bottle, gel flask and holder, wax pouch, and a nifty way to manage excess belt length. 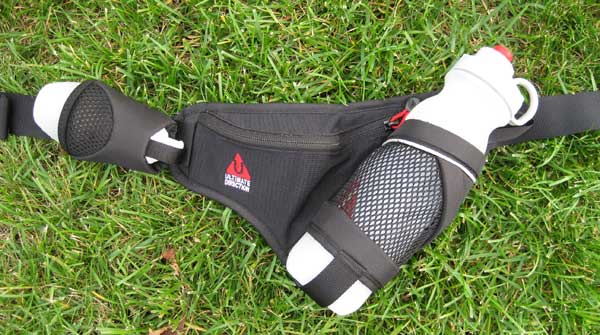 Above, my Older Ultimate Directions "Access Gel". Note the gel flask holder on the left, a zippered pouch in the middle, and angled water bottle holder on the right.

Let's dive into the details... 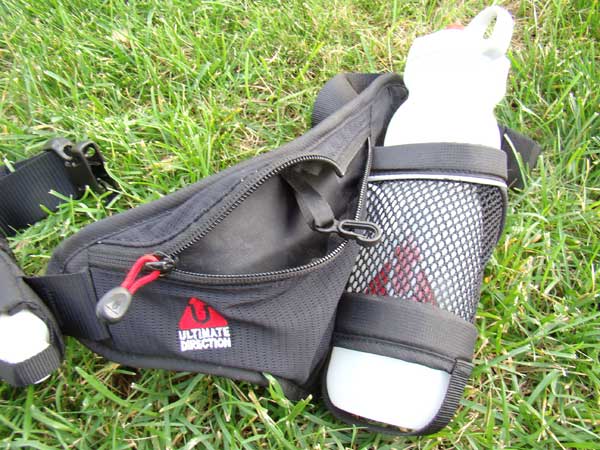 The pocket (above) has a key ring. 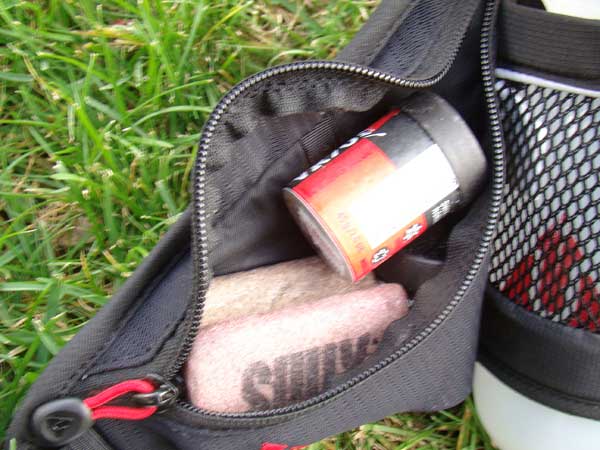 The pocket can barely hold a cork and two tins of wax. Good luck getting one of the new larger tins (like Toko has this year) into it. 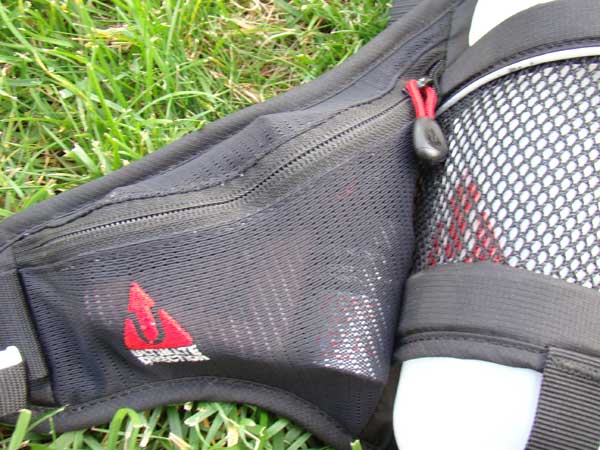 Fortunately, the pocket has some stretch to it, so you can get a little more into it. 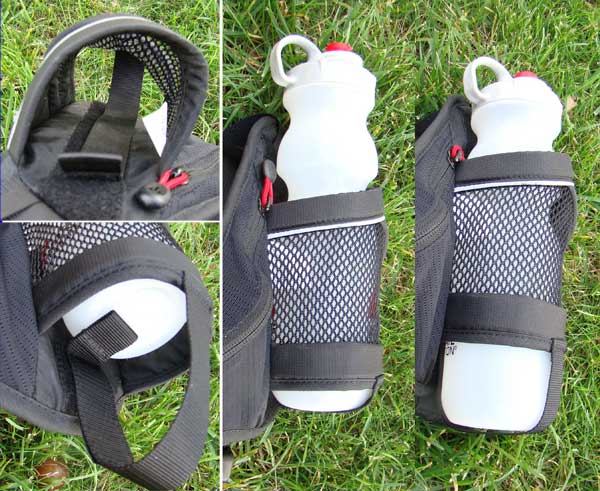 The water bottle holster has an ingenious adjust strap (top left) that allows you to adjust how far a water bottle slips into the holster (right). Not bad for keeping long bottles lower in the holster for balance and short bottles higher for accessibility.

One problem: the strap, because it Velcros to the inside of the holder, actually gets in the way of the bottle when you insert it (bottom left). The bottle pushes past, but you can fell the resistance.

The holster itself has been lightened with a fabric mesh. I'm not so impressed: it tends to compress when putting the water bottle back in, making it harder to seat the bottle. 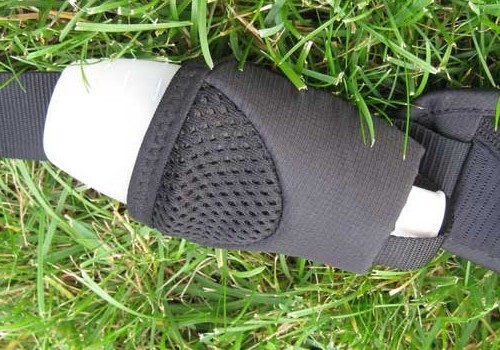 The flask is exceptional in it's poor design: It mounts the flask horizontally - so its easy to pull out - but has nothing but friction to hold it in, so it falls out easily on its own.

The gel flask in the picture above is not the flask that came with the belt. That first flask lasted a whole mile before it was lost forever. The second gel flask lasted a little longer, but only because I ran down the trail with one hand checking to make sure the flask hadn't worked it's way out.

I removed the gel flask holder from the belt as useless extra weight.

This was quite clever: roll up the loose end of the belt strap and slip a flexible loop over it to hold in place. The ends can be a little heavy (if you're thin) and sometimes they come loose. but for the most part, it works. 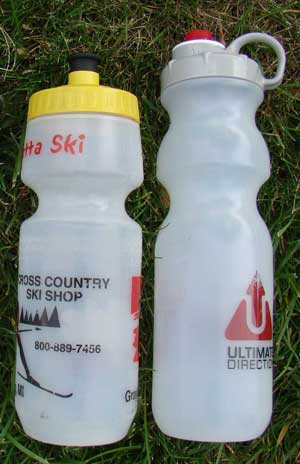 The holder comes with it's own 26 oz. water bottle (top right), with several difference from a normal water. First, it's longer. While this doesn't seem important, it is for two reason: It's too tall to fit in my cupboard without taking the top off, and it does not fit upright in my dishwasher. One point against Ultimate Directions tampering with a water bottle.

Second, the bottle is slightly narrower than a normal bike bottle. That means you can't use it on your bike: it's looser in the cage and the chance for it bouncing out is higher. Two points against.

Third, there's a loop to grab onto. In action, it's pretty irrelevant. Seems to be extra weight to me. We'll score this neutural.

Fourth, Ultimate Directions insisted on making the sophisticated adult version of a baby bottle's nipple. The nipple in it's retracted position keeps your water or HEED from splashing out (far left). To drink, you pull the nipple out and suck (2nd photo). Then you press the nipple to the side and it automatically retracts back into the bottle (last three images).

Sophisticated does not make it better: the bite valve on the nipple is somewhat small. Water flows more easily through a traditional bottle, and I find it easier to close a regular bottle. 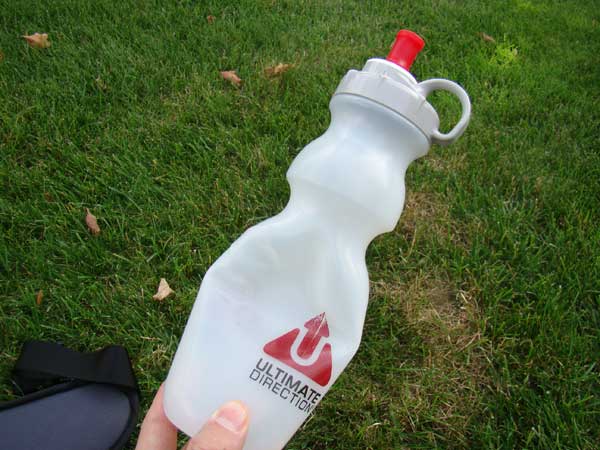 The worst part about the bite valve is that it does not let air back into the bottle after you take a swig. Squeeze the bottle to get water out, the bottle stays flattened. Try putting THAT back into your belt during a race when you're in oxygen debt. You can use your teeth to open the bite valve to let air in, but why not just use a regular bottle instead? Two more points against this bottle.

Me? I don't train or race with this bottle. I use it at the office instead of a water glass, and use the top for spill protection. I don't even drink out of the top: I unscrew it and drink directly from the bottle.

If your a skater or runner who just needs to carry a small phone, keys and some individual packets of Hammer Gel , this water belt holder works pretty well. Just remove the flask holder and toss the water bottle.

Ultimate Directions has replaced this belt with the Access Gel (below). I have not seen it in person so I can't make a recommendation. It does look the same except for the gel holder, which is now mounted in a more reasonable vertical position. I still have to wonder if it would bounce out if running. 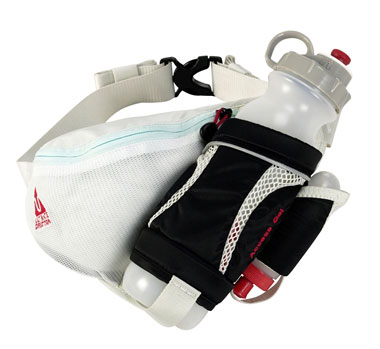