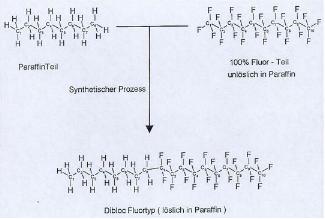 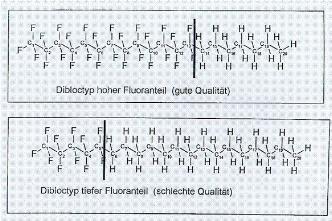 that would be more expensive and also more potent.  The lower one has shorter fluorocarbon and Good vs Badlonger hydrocarbon parts resulting in a less expensive and less potent fluorinated hydrocarbon molecule.  What can you learn from this?  When a wax company representative tries to fill your head with stories about what a "high percentage of fluorine" his brand contains, you can probably assume that they are using the cheap and less potent type of fluorinated hydrocarbon.  How to cut through the rhetoric?  I recommend skiing on the products that seem to perform well and not to base decisions on talk.

Here are some other noteworthy characteristics of fluorinated hydrocarbon waxes:

1. They are generally more resistant to dirt than hydrocarbons.  Of course any soft wax contains more oil than a harder wax and would thus be worse against dirt, but given a similar hardness, the HF waxes are far more dirt resistant than hydrocarbon waxes.

3. They are more hydrophobic.  Given the same hardness (soft waxes are generally more hydrophobic than hard waxes), an HF wax is better in wet conditions than a hydrocarbon wax.

4. Generally speaking, the harder fluorinated waxes such as HF Blue contain less fluorine in them than the softer ones such as HF Yellow.  The harder waxes also contain synthetic additives which make them better in the cold which the softer waxes do not contain.  Despite it containing fluorine, HF Blue is not close to as fast when the snow is wet as HF Yellow. HF Blue is specifically formulated to perform in the cold. 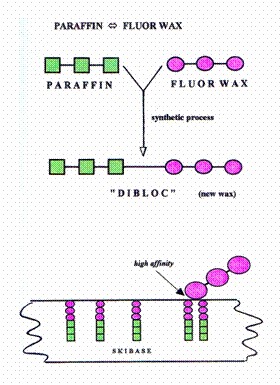 6. There is another reason that we use HF waxes constantly besides them being faster in general.  HF waxes are the idea platform to put a fluorocarbon overlay on.  Pure fluorocarbons (overlays such as HelX and JetStream) do not "like" hydrocarbons.  They try to get "away" from them in any way that they can in a fashion similar to when two positive sides of a magnet come together or when oil and water are attempted to be mixed.  However, the HF wax bonds well to a base (and to hydrocarbon waxes) and fluorocarbons bond far better to HF waxes.  It is also worthwhile to note that when a ski is waxed with an HF wax, the molecules align them selves such that the hydrocarbon part angles down toward the ski and the fluorinated part angles up away from the ski.  For this reason, when a fluorocarbon overlay is applied over an HF wax, it is almost entirely on the fluorocarbon part of the molecule.  The picture to the right illustrates this.  The squares represent the hydrocarbon part of the HF molecule and the small circles the fluorinated part of the HF molecule.  The big circles represent the  that is being applied.  The ski base is represented by the entire big rectangle.  Hopefully this chart helps illustrate this truth.  The bottom line is that when a fluorocarbon is applied over an HF wax, the fluorocarbon wax job will last far longer than when it is applied over a hydrocarbon.  Obviously when using an LF wax, the durability is somewhere between the two extremes.

So, we use HF waxes because they are faster in general and also so our fluorocarbon overlay performs for us for a longer period of time.