Kick-Double Pole is your friend!

This past weekend I was fortunate enough to ski in the Noquemanon Ski Marathon in Marquette, MI. If you have not yet had the opportunity to ski this race, and you have a propensity for long ski races, you should put this event on your calendar for next season. The terrain, excellent snow, technical and demanding trails, and the one-of-a-kind U.P. scenery all combine to create a memorable weekend.

This year's Noque featured some transformed, cold, and very abrasive snow. The tracks were perfect and the skiing was fast, but once we started racing it was no secret that maintaining kick throughout the entire race was going to be nearly impossible. Even with Toko Base Green Klister binder, the talk in the front pack of the race was all about how long our kick would last. Fortunately, most of the climbing on the Noque course happens in the first 25 kilometers of the race, and the second half of the course is much flatter, with significant elevation loss. It's quite possible to double pole almost all of the second half of the race (if you have to!), making good classic kick a little less important.

Between the sections of climbing during the first half of the race, there is quite a bit of really nice rolling and gradual terrain. I noticed in our lead pack of 15-or-so skiers that the technique of choice was to double pole as much terrain as possible. I understand this, as I feel that it's relatively easy to get into a double-pole "groove" and find a good rhythm. Double-poling as long as possible, switching to a stride for the steep sections, and going straight back to double-pole is, to most people, the best way to get to the finish line as fast as possible. 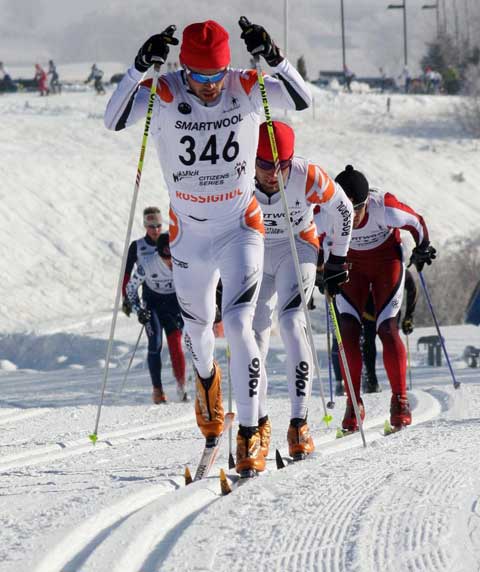 However, once our lead pack settled into a relaxed and consistent pace, I noticed that I could kick-double pole many of the flatter sections much easier than I could double-pole. Knowing that the second half of the race was going to provide plenty of opportunity for double-poling, I figured it was best in the early going to kick-double pole as much as possible and save my double-pole energies for later - particularly since most of the other racers seemed to be double-poling exclusively. Using a relaxed, long, and fluid technique, the kick-double pole allowed me to ski at a lower intensity, save my arms and core for later in the race, and let my legs to do some light work and clear some lactate.

For longer races and marathons where there is likely to be more gradual terrain than most 10 or 15K races, the kick-double pole is an often under-utilized technique. It is difficult to master the kick-double pole to the point where it can be an efficient and, more importantly, relaxed technique; I've know many very good skiers who have never developed a really solid kick-double pole in their careers. But it's worth working on and adding to your arsenal of effective techniques. I have spent a lot of time in the past, during the summer and fall, doing upper-body specific strength workouts on rollerskis. A significant component of these workouts is doing 30 second kick-double pole repeats on both gradual and steeper hills. I concentrate on a long glide, a high position at the start of the downward compression, and fast, powerful motions in both the upper-body compression and kick initiation.

Kick-double pole is your friend. Learn it, and utilize it, to maximize your racing potential! Oh, and put the Noque on your race calendar for next season - you won't regret it!