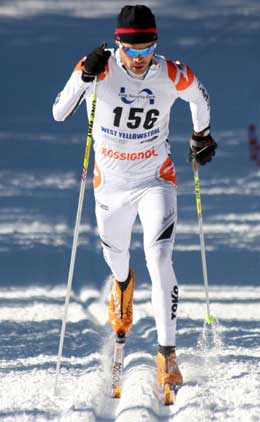 This past weekend I competed in my first classic race in about 2 years. I had no idea what to expect, since I had also not yet had a chance to do any classic intensity, and I had had only very limited testing time on my new fleet of Rossignol skis. I knew that I had a lot of things to figure out in the 75 minutes I was to spend at the race venue prior to my start.

To make matters a little more stressful, the race course was closed for my warm-up, and the race tracks seemed to be significantly harder and faster than the trails we were warming up on. So, I had to first make an educated guess as to what kind of ski I wanted to use for the race, and then try and determine which of my 3 pairs of race-waxed boards would best fill the need.

At times like these, it's all too easy to over think things a little, get stressed out, and ultimately make decisions that end up being too conservative and costing you once the race begins. At a couple times that morning, I felt myself sliding towards the 'safe choice'; a powder ski with a thick layer of wax. This would have been the easiest decision, as it would have guaranteed good kick and helped me carry a little more confidence to the start-line.

In the end, I chose a hard-track ski, applied only a moderate amount of wax, and had awesome skis for the race. I "re-learned" a valuable lesson; experience and instincts are often the most powerful tool a racer has at his disposal. It's easy to complicate all things skiing (training, ski selection, waxing, racing, etc.)  But this need not be the case as, at its core, ski racing a just a series of relatively simple and straightforward processes and decisions. If you can manage to focus on the most immediate problems and disregard those over which you have no control, you'll be more successful for it.

The other morning I was able to control my emotions and make simple, common-sense decisions that lead to a great race. Never underestimate your experience and decision-making ability; they're your biggest asset!