The Wabos Loppet is a fun event, not a race, that takes place in March. It begins with a scenic hour-long train ride from Sault Ste. Marie, Ontario to the lumbering village of Wabos. At Wabos, skiers begin an uninterrupted 27 KM (16 mile) cross country course that leads through the woods, over two lakes and several beaver ponds to Sheppard Lake, where tea and oranges are served. The rest of the course is on groomed cross country trails leading to Norm's cabin at the edge of Bone Lake. There skiers will enjoy refreshments of tea and cookies. The last part of the trip takes participants to Stokely Creek Lodge for a festive celebratory barbecue and live entertainment. Rate - $65.00 - $110.00 depending on when you sign up.

Jeanne Manigold: "What is there to say about me? Just that I love doing sporting activities, especially outdoors, but I am just not that athletic. But I'm gonna die trying!" See Jeanne's The Non-Athletic Athlete Blog.

Today was The Wabos Loppet (meaning a rabbit's long journey)!! 27K of Cross Country Skiing just north of Sault Ste. Marie, Ontario. So sit back, grab a drink, and hear the long tale of my trip:

Our trip started out yesterday as me, my sister Teresa, my brother-in-law Bob and our long time family friend Mike headed up to Sault Ste. Marie, MI. We left around 8:30am, and after a few pit stops, were up in the beautiful UP of Michigan around 3pm.

It was round 14 degrees at that time, and we decided to do an easy 3 mile night ski at a near by trail. When we started out skiing, the Sun was still peeking through the wooded trail, but that last half (or so) of the ski we were skiing under the lights, which was really cool. I guess I am easy to please, because I was giggling like a school girl the whole time under the lights. I have only been night downhill skiing, so I enjoyed it immensely. It was also a great warm up for the next day's almost 17 mile ski.

Sunday morning we woke up to a nice and balmy -12 degrees FAHRENHEIT! Now my story takes a little side trip, so please bear with me:

My sister is a lovely person, fun to be with, NEVER complains about anything! And let me tell you, she had a LOT of reason to complain. Her trip was almost RUINED for several reason:

Ok back to our story.

So it was frigging cold as we crossed the border into Canada to go to the train station. We got to the the station at 7:15 and the train didn't leave until 10ish. So that part was kinda boring, but the thing I enjoyed about it was the people watching and meeting. You know when you run in a race or ski with a group (and this wasn't a race), the camaraderie is awesome. You feel like you know people and it's easy to strike up a friendly conversation.

And as far as the train ride goes, I don't love a train, but this "snow train" was a short enough trip (about an hour) and traveled through the snow-covered Algoma forests to the original lumbering village of Wabos, and I enjoyed it a lot.

At Wabos, you get off the train, take a short walk down a hill and begin skiing. Though the day started out so cold, it got to a much warmer 18 degrees. I know a thirty degree difference sounds like a lot, but it was still damn cold. So with the Camelbak strapped on and Ipod cranked up, I was ready to go! Though after about 30 minutes, I warmed up nicely, peeled off a layer and was quite comfortable most of the day. 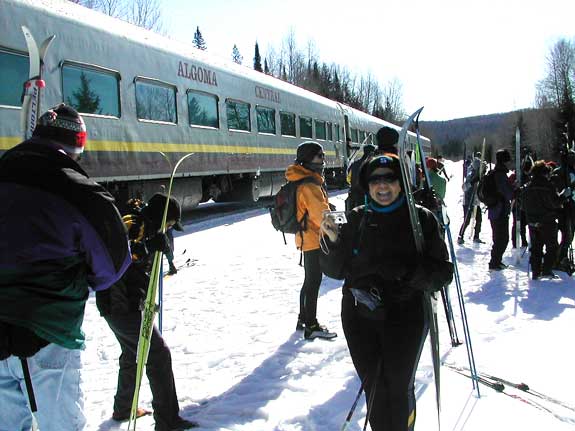 Getting off the train in Wabos

The trip is basically split up into 3 sections, separated by 2 pit stops, each mostly equidistant from each other. Even though up until today, I've skied 4 times in the last 8 years (all in the last 2 weeks!), I did quite well. I did fall on several hills, but I am still learning, and some of it was getting over some nerves. Once I got comfy, I was doing quite well on many hills, even some twisty ones.

The scenery was amazing. Rolling mountains, snow covered tree stumps with snow piled so high they looked liked giant mushrooms, and the sky: wasn't a cloud in it.

The first pit stop was at the bottom of a hill, over a small make-shift bridge, and it was a welcome stop. Cookies and tea were served and if you were brave, you could freeze your ass off in the lovely outhouse (which I think is a hole with a tarp around it.) Obviously, I didn't partake in this tradition.

The second part of the trip was a LOT of up hill. Not to say there weren't plenty of uphills on the first part, but they seemed longer on this section. Let me just say this about uphills: Walking like a duck hurts my ass. 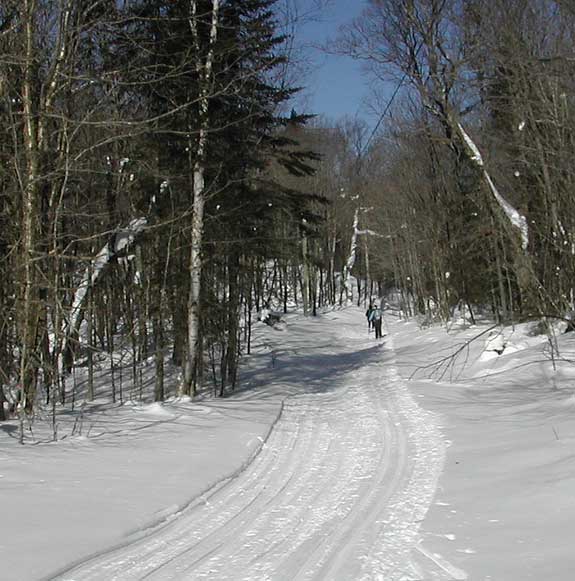 View from the Wabos Loppet trail

At the end of this middle part of the trip, there is a long, and today, somewhat slick hill that I had a few troubles on. The first problem was that I got a little on of control and I fell. Not a big deal really, but this is what started the litany of problems that followed. So here I am on a hill and you need to get out of the way as fast as possible, which started the second problem, which was I couldn't, I was kinda stuck. Next issue: No gloves. I took them off because I was hot, and this is not a problem unless you fall and they get in the snow. Fortunately I apparently had a big distance between me and the next skier, so I had some time, but still felt a big of a panic.

So I finally got unstuck, got my gloves on and got myself up and started to go again, and I fell again. This is where I had the next and biggest problem of the day. Teresa made the suggestion to take off my skis and walk it. Well I was going to have no part of this. I mean after making "Hell Mountain" my bitch, was I going to let this little bump stop me from becoming king of the forest?

After spewing out untold expletives at my sister (well not *at* her, but in her general direction), and realizing that I was now starting to hold people up, I stood up and notice my ski had come off. So I looked down, and guess what? Apparently in the falling debacle I broke the binding on my right ski in half. My ski was finished.

I took off the other ski and started walking down the hill. No, let's call it stomping, because I was mega-pissed. I threw my skis, unloaded a few more choice phrases, and stood there waiting for my Bob and Mike to catch up to us. Patient and understanding Teresa suggested that we wait for them and let Bob have a look.

When Bob got there we all quickly realized that there was nothing he could do to remedy the situation. And well, you know your f'ed when Bob can't fix it.

Bob and Teresa skied ahead to the next pitstop, which was not far away, and got us some help. Mike, who decided to stop skiing because he was cramping up bad, and I started walking back and after a bit, one of the ski-patrol guys met up with us to look at my binding. He did suggest he could duck tape it, but I just didn't feel that was a great way to go. I'm not that strong of a skier, and well I don't subscribe to the notion that duck tape fixes everything. 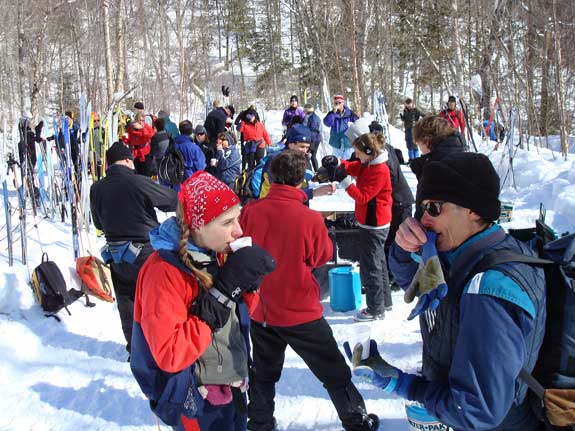 So we got to the next stop which is "Norm's Cabin" (A whole other story that I won't bore you with at this point, since this has gotten lengthy) and arranged a ride back to the Lodge. Teresa and Bob went on and skied the rest of the trail, but unfortunately my trip (and Mike's) stopped after 11 miles.

Mike and I waited for what seemed like forever to get a ride back. But finally our rescue was completed by riding in a small trailer pulled by a snow mobile. It was probably the coldest 20 minutes of my life, but Mike and I snuggled together to keep warm and the scenery continued to be breath taking.

Back at the lodge we had Brats, Chili and Beer (and lots of it!) and sat around a wood stove to get warm. A great end to a great day. 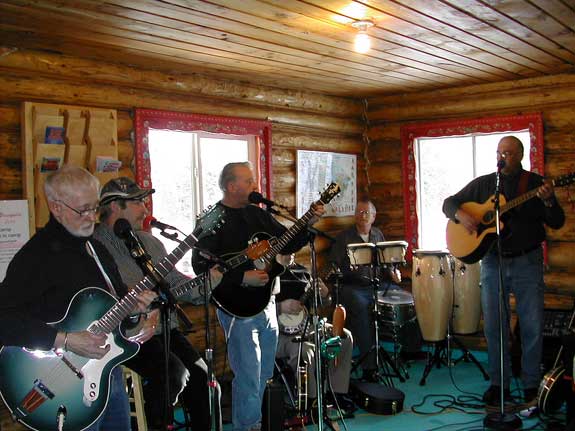 Live entertainment at the end of the Wabos Loppet

Now at first I was angry about the equipment failure, after all this would make 2 things I never got to do on this trip: Ski to the end and see Mike in his famous thong, but there were many successes to the day:

And not only was this just a fun trip, but now I have a fun story to tell about it!

Here are some fun photos from the trip: