What got me started

My idea for making a bike frame originated while I was experimenting with carbon fiber rollerski prototypes. My goal was to have some rollerskis ready for the 2007-08 ski season in order to market them to skiers in the Michigan Cup races. However, only an untested model was completed that didn’t satisfy my production criteria. I shelved the rollerskis so that I could make a bike frame in time for the triathlon season which, for me, started on June 15. 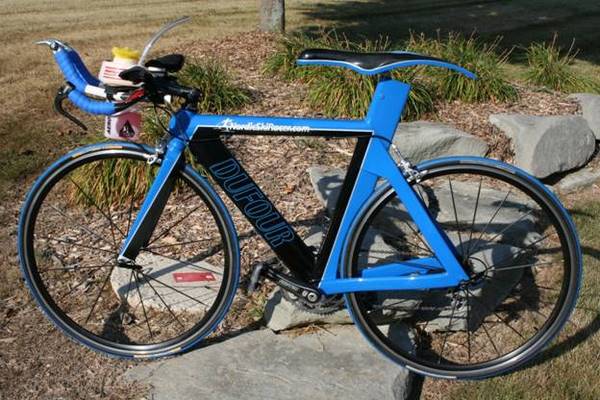 I got started in my basement storage room in March. The finished bike shown above is the second bike frame I built, the result of a tedious journey that started with the build of a frame that is now sitting in my garage cut up in several pieces. The experience gained from building the first bike frame contributed to the successful build of frame #2. It also contributed to many frustrations along the way.

I photographed the build of bike frame #1 from start to finish. Unfortunately, my photography of frame #2 in the build process is limited. I reached a point in the build where my focus was to get it done rather than have any concern for picture taking.

I purchased a 4’ x 8’ sheet of ½” inch thick Dow Styrofoam from Home Depot to get started. I laid out the front triangle using dimensions from the geometry of a 51 cm Cervello P3. I bonded two half inch pieces of foam together with a single layer of 6 oz biaxial carbon to give the core more strength and rigidity while working on it. Next, I shaped the tubes with a router and block sanding, then, routed some cable casings. 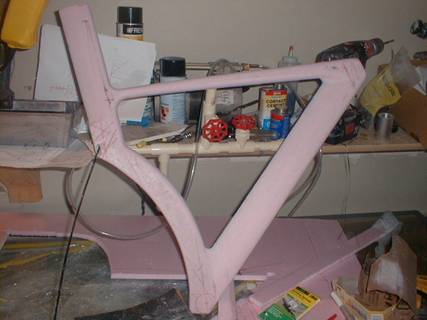 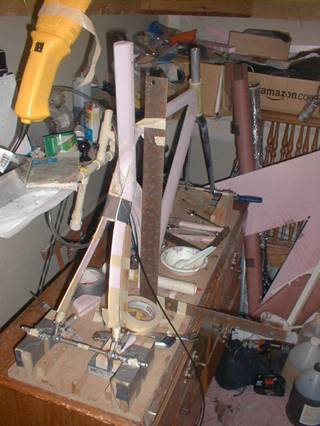 While attaching the chain and seat stays I broke each piece at least twice in trying to attain the desired curves. This would come to haunt me later.

FRAME WITH UNWETTED 24K CARBON PRIOR TO VACUUM BAGGING 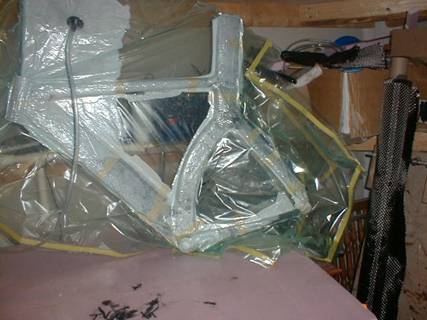 BIKE IN A BAG – VACUUM BAGGING

Once I got the bike in the bag I was feeling pretty good about my progress. Then I took the frame out after the epoxy resin had cured and to my dismay I discovered a warp along the length of the down tube. The suction from the vacuum bagging pulled the down tube to one side causing a major warp. I cracked the frame at the low point, realigned it and bonded it, only to discover I still had a warp. The warp was down the whole length of the tube which made the repair very difficult. The repair was corrected by adding foam to the low side of the tube, and block sanding both sides. 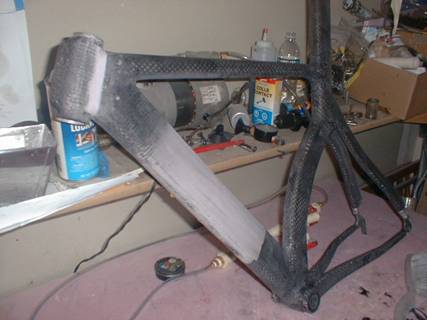 FRAME SHOWING ADDITIONAL SANDED FOAM ON THE DOWN TUBE

Once the bike was substantially complete, I installed the bottom bracket, crank, fixed chain (because no derailleurs), fork with handlebars and stem, and wheels. In doing so more problems became evident. The multiple breaks of the foam core on the non-drive side chain stay resulted in an extended modification of its curve. This caused the crank arm to hit the chain stay when it came around. To repair it, I grinded it down well beyond the contact point and built it back up with carbon. Another problem was my rear wheel clearance between the chainstays. The tire was rubbing slightly on one side. I grinded that down with my Dremmel tool.

Once I got the bugs worked out from the first mockup, I added the seat, derailleurs, cables, and brakes. The rear brake was very difficult to install due to the limited clearance for access to the mounting nut. 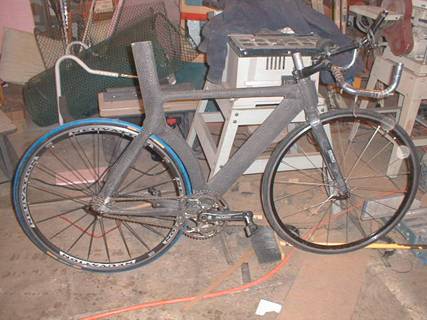 I finally got on the bike for a training ride. It rode OK except the rear wheel would still rub occasionally when I would start cranking hard. The frame seemed to have a subtle sway when I stood up on the pedals. Not stiff enough for this 145 pounder. I rode the bike 3 times for a total of about 60 miles.  I decided that I couldn’t accept these issues and by fixing them I would still end up with a substandard frame. Time to build frame #2. 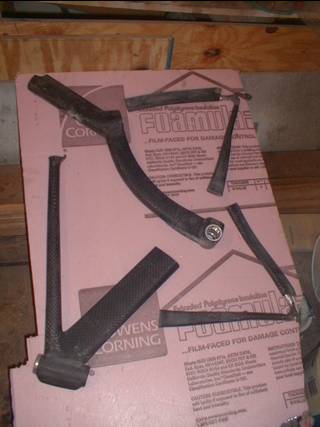 FRAME #1 IN ITS PRESENT CONDITIO

My approach to frame #2 was to make the tubes individually then join them afterwards. This gave me more control over the quality of the tubes along their whole length. This method worked especially well for the smaller chain stays and seat stays. 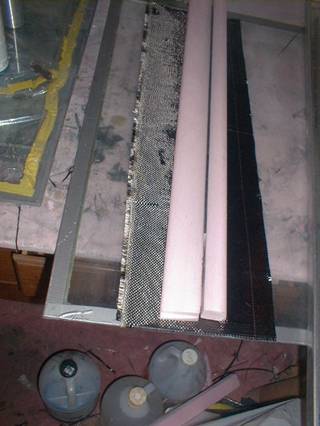 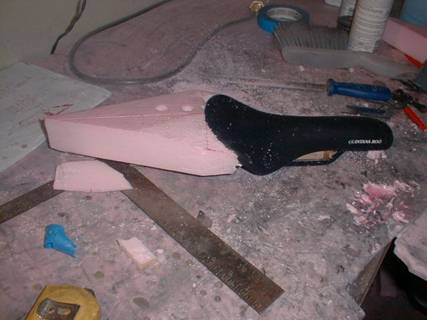 THE MAKING OF THE SEAT PLUG

The seat was made by jamming a piece of wood under a regular bike seat extending it out the back. I attached a block of 2 inch rigid foam with a couple screws and sanded it to the shape I desired. Then I applied drywall mud to the foamed area to smooth it out and blend it to the original seat. I applied several layers of parting mold release wax then laid several layers of fiberglass over the part. That made my mold. I laid up a couple layers of carbon then removed the seat from the mold (picture below).   There were some defects in the mold, so I filled those in the removed part with epoxy putty then covered the part with a clean exposed layer of carbon. I brushed on several layers of epoxy resin to fill the weave then sanded the surface to a smooth finish. Finished off with paint and clearcoat. 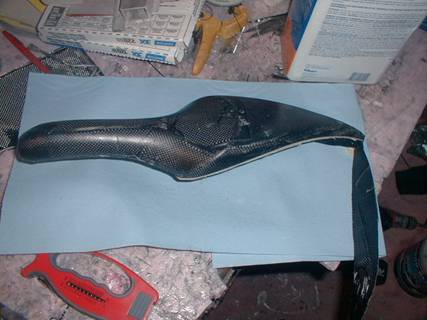 SEAT JUST OUT OF THE MOLD

I started by cutting and routering rigid Styrofoam for the core. In order to ensure lateral stiffness, I bonded 1/8” thick carbon ribs in the aero down and seat tubes.  Then I laminated multiple layers of 600ksi biaxial weave and unidirectional carbon cloth with epoxy resin using both the vacuum bag, and the electrical tape wrap methods. Once the tubes were made, I poured laquer thinner in the tubes to melt the foam.

I was concerned about the weight of the aero tubes. To lighten them, I removed the ribs which proved to be a good call since the tubes were still plenty stiff. I proceeded to mitre the ends of the tubes for a more precise fit. Then carbon cloth was epoxied at all the joints, including the aluminum rear dropouts, head tube, and bottom bracket which were purchased from Nova Cycle Supply. After many rounds of puttying and sanding the joints, the Dupont Imron was applied.

Meanwhile, triathlon # 2 on June 29 is history and my last triathlon on August 24 is very fast approaching. Not to mention that I started an exterior renovation project on my house in June that included removal of the existing aluminum siding, replacing all the windows, and installing OSB sheathing, rigid insulation, Tyvek, new siding, and soffit and fascia, all by myself. Needless to say, my training suffered a little. I did a complete mock up of the bike in late July to make sure everything worked. Did several training rides and only had to make a few fitting adjustments. I only needed to paint the bike but I still hadn’t ordered the decals.

I couldn’t use the bike in a race without riding it at least once before the triathlon. So, I did have a deadline to meet.  I was going to do everything I could to get at least one race out of that bike before the season was over.

I stripped the frame and fork of all of their parts and completed the finishing process with some primer, spot putty and wet block sanding using 400 and 800 grit sandpaper. As with other paint jobs I’ve completed on bike frames, I would typically paint the lettering rather than use decals. I couldn’t with the nordiskiracer.com because the detailing was too fine.

I ordered the “Dufour” logo as masking in vinyl. The masking was tricky because the painted portion was the blue on a black background. After the black background was painted, I prepped it for the “Dufour” lettering. Then I applied the vinyl masking stickers and proceeded with the blue paint. I was getting excited that I was almost finally done (2 weeks to go until my last triathlon).

Then disaster struck again. When I removed the vinyl masking, much of the black background paint came with it. I couldn’t figure out what happened except that using 800 grit sandpaper may have made the surface too smooth for the paint to bite into.  So, I had to re-sand the affected areas and get the frame ready for paint job #2. This time I ordered the “Dufour” logo as a decal with the color to match my paint. I got them on Friday and installed them on Saturday night (one week before my race).

The only thing left to do was to clearcoat the frame. I very lightly sanded the surface of the decals so that the clearcoat won’t chip or peel. Unfortunately, I sanded too much and it bit right through the color in spots. I couldn’t get new decals until Monday. I applied the clearcoat Monday night, put the bike together Tuesday night, then made some adjustments Wednesday afternoon and went for a ride, 4 days before my race. What a relief!