When NordicSkiRacer.com offered me the chance to evaluate the innovative Go Faster ski boot and binding system, I eagerly drove 50 miles out of my way to pick up the equipment (at Mike Muha’s home in Wixom). I knew I had one good day to try the system, since the weather would be warming the next day. I loaded my van with three pair of Go Faster boots and the Ski Trab Nordic freestyle skis equipped Go Faster bindings. 40 minutes later, thanks to a very accurate Google map and light Saturday morning traffic, I was heading into the Independence Oaks parking lot.

Upon un-boxing the skis, I immediately noticed that the binding and boot system resembles a Look bicycle cleat. A lip on the bottom of the boot slides into a slot on the binding, and another lip on the heel of the boot clips into a spring-loaded locking mechanism. The entire binding pivots upon a hinge. The binding is free to rotate through an arc located about a centimeter below the toes. A spring returns the binding back to the ski during the rest phase of the skating motion. According to Go Faster, this results in more power, more efficiency, and more control. 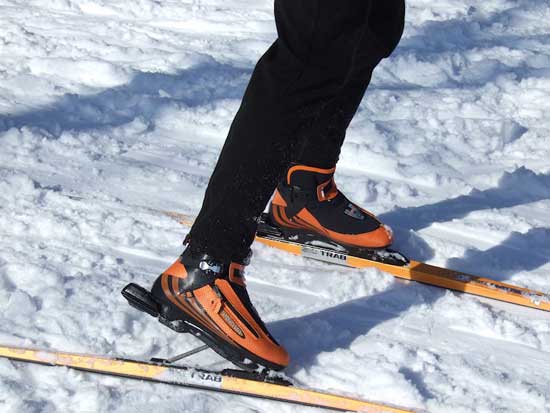 The boots are light. There is no rotating cuff commonly found on other brands of skating boots. The entire bottom half of the boot surrounds the foot in carbon fiber. A speed-lace lies under the well insulated orange and black exterior. A ratcheting strap (like those found on quality bicycle shoes) allows the wearer to fine-tune the tightness of the boot. These extremely stiff boots are fairly comfortable to walk in.

Upon reaching the trail head, it took me several attempts to clip into the binding. I also had my long-time friend Ed Reid test the system, and he also found it difficult to securely attach his boot to the binding. Ed and I agreed that much like any clipless pedal system, the Go Faster system would probably work better once we spent more time with it. 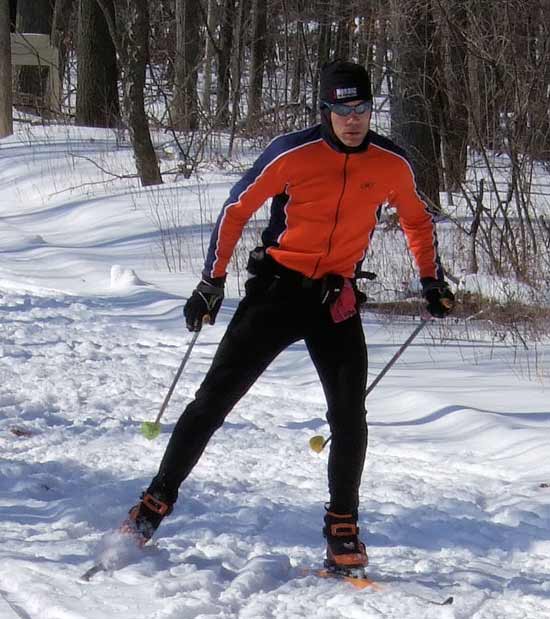 Plowing through the soft snow.

My first impression upon skiing on the trail was that the Go Faster system increases the distance from the snow to the bottom of the boot, making it slightly more difficult to achieve a flat ski. The snow that Ed and I tested the skis in was very soft, and the Ski Trab Race Aero HR skis were quite stiff. Unfortunately, there was no hard track available to further test the skis.

After getting comfortable with the boots and skis, I attempted a few full-speed V2 sprints. The skis were not waxed properly for the conditions, but the system felt stable and powerful. I switched back to my Solomon/Fisher skating equipment and let Ed try the Go Faster equipment. 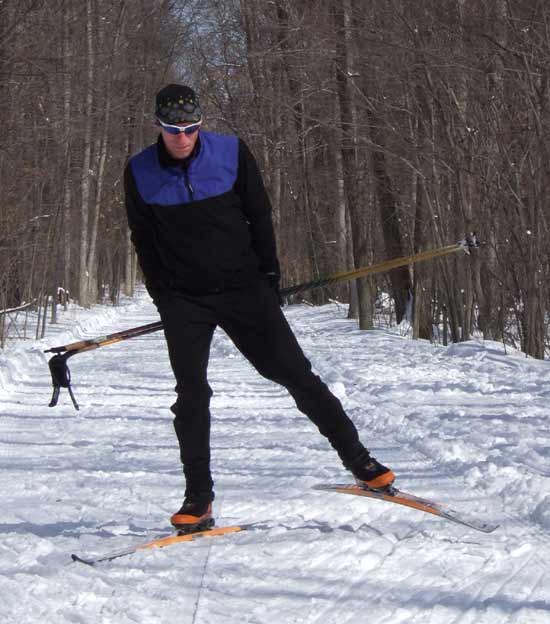 Ed skiing without poles to test riding a flat ski

Since the trail was extremely soft and the skis were not waxed for the conditions, neither Ed nor I attempted to ski a full lap with the Go Faster system. Look for a more in-depth report from NordicSkiRacer.com in the near future.

Anyone considering purchasing the Go Faster system should expect to spend quite a bit of time on the snow learning how to get the most from the system. The boots are made in Italy and are narrow when compared to other manufacturers. Those with wide feet should consider purchasing a size larger than normally worn.

A detailed explanation of the Go Faster system may be found at http://www.chi-townsports.com/GoFasterPresentation.pdf 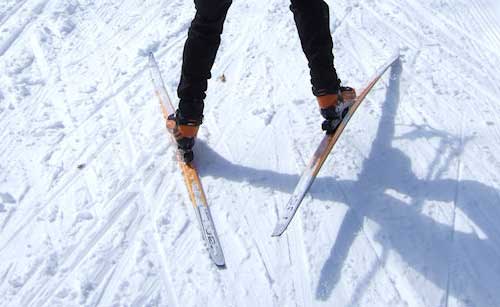