Cliff Onthank surprised himself by winning the Holiday Classic in difficult waxing conditions. Onthank beat out Denny Paull and David Mclean on the 9km course. Tracy Hardin is showed she back in form by winning the women's 9K event over Michaela Harris and Amy Todd. The top junior in the men's event was Brendan Baic. 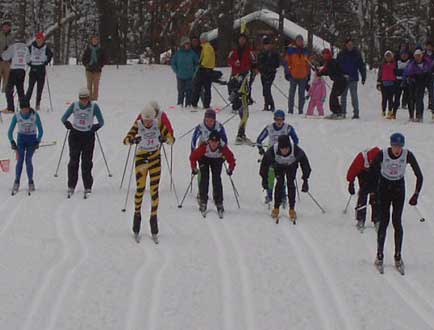 Onthank did a warm up on the course to see if he could double pole it. He remarked, "I don't think I can win on this course by double poling." He decided to try anyways inn hopes of taking advantage of potential waxing woes of other racers.

And woes were many. The air and snow temperature were right around the 30-32F range leading up to the start of the 9km race. The kick wax that seemed to work during warm-up was Toko Yellow covered by the harder Toko Red. Using just Yellow caused icing. Using just Red did not provide enough kick. Several skiers also reported that Swix VR50 was working.

A moist snow fell during the warm-up, then the 6km junior event was run. During that race, the snow stopped, the temperature dropped 5 degrees and a dry snow began falling. By the time the 9km race began, conditions had changed enough that everyone's dialed-in wax was now too warm. Icing was widespread throughout the longer race, racers skiing herky-jerky as the snow buildup would bring one or the other ski to a halt at the most inopportune time. 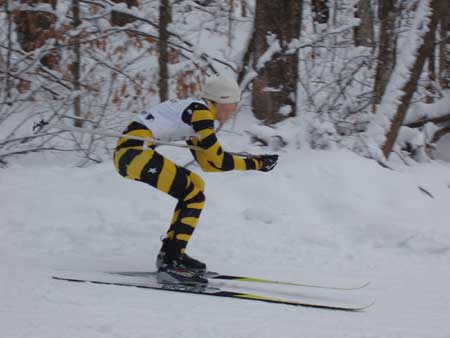 Greg Brown gets around a tricky corner in a tuck.

The kick wax nightmare was Onthank's ticket to victory. Although other racers beat him to the top of hills, he out glided them enough on the descents to maintain a lead to the finish.

Racer Yvon Dufour decided to dump the waxable skis and went with a pair of waxless skis. He reported that he had great kick up all the hills while others were floundering with icing.