Rarely does one picture say so much: Doublepole

I noticed a picture of Beckie Scott from the Torino Olympics. Rarely does one picture say so much. Beckie, on the right, is using the new double pole technique, leaning slightly forward, raising up on her toes and planting her poles pointing backwards in a direction that will give immediate forward propulsion. She is preloaded and will begin her push with a compression of the stomach muscles. Elbows are high and in a 90 degree bend. She will maintain this angle through the push using her back muscles next and then end with a push from the arms when she straightens them, if she has time. 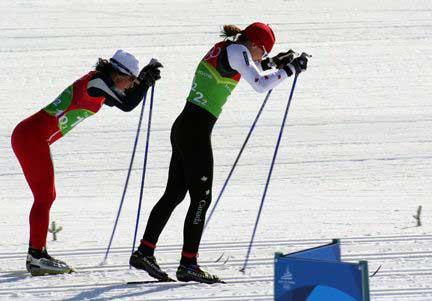 The "World Cup" skier next to her is using the old technique, having leaned far forward when planting her poles either vertically or most likely in front of vertical where she must catch up to them before they will provide any forward momentum. As you can see from the picture she has already used most of her upper body compression and the poles are still only slightly past vertical. Her head is low and she is diving through the double pole - result - a lot of wasted effort for not much gain. She can't use her stomach and back. Her next motion will be to open up her arms and push mostly with her weakest muscle - her arms. She will finish the stroke in a lower body position than Beckie. She won't be able to turn over as fast as Beckie and will loose in the sprint to the finish.