"Hills are my thing" said Laramie, Wyoming native and UofM ski team member, Sam Fay, after skiing away from the field on "The Beast" skate ski course at the Black Mountain Freestyle on Sunday. His winning time of 37:29:08 was probably slowed a little by the surprise of 3-4 inches of fluffy new snow on the course that was groomed as quickly as possible by Denny Paull and Tim Fowler as race time quickly approached. Denny jumped off his snow machine and onto his skis and had enough energy left to sprint against former champ, Ryan Harris, on the lake finish but had to settle for 3rd as the 31 (and 1 day) year-old held off his mentor to earn 2nd place.

In the women's race, Abby Johnson, a Black Mountain Nordic Ski Team member, who had worked the aid station for the classic race the day before, had her strongest finish yet on her home course, winning the women's podium with a time of 50:53:07. Second place went to UM skier Isabel Carr with Team NordicSkiRacer's Jolene Ng finishing 3rd. 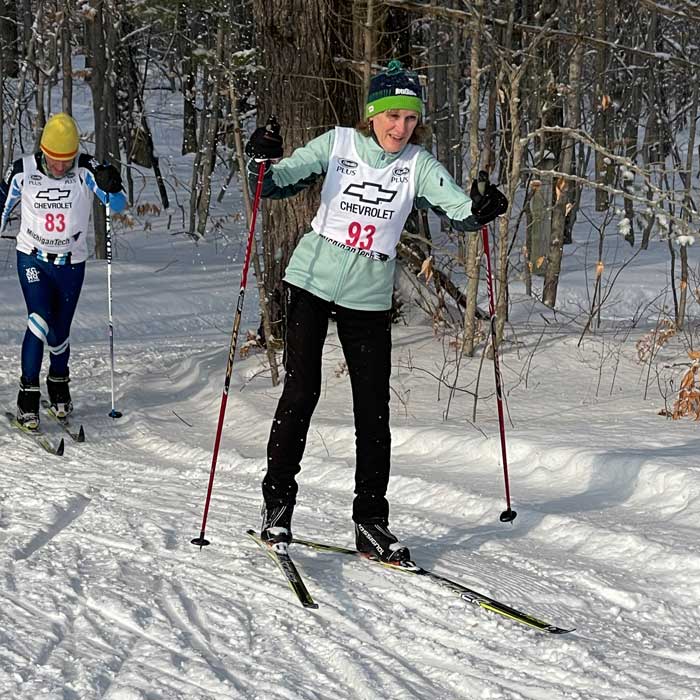 The sun came out and the 19 degree temps were almost balmy for the racers as they skied "The Beast" in a clockwise direction this year. Course designer Mark Stormzand has returned to the Cheboygan area and has helped the race committee learn of the creation of the skate loop at Black Mountain. Reactions to the race have been strongly positive from all those who skied.