Toko HP Hot Wax vs. HP Liquid Paraffin: What is Better When?

In general, hot wax covered with liquid is faster, with one exception

We tested HP hot wax on one ski compared to HP hot wax with HP Liquid Paraffin on top on the other ski. In general the ski with the HP hot wax covered with the HPLP was faster. The only conditions where the HPLP over the HP hot wax was not as good (initially, in all cases after it got skied in for a while it was the same and in some cases it became faster) was in dry new falling snow or dry new fallen snow that hadn't been groomed yet. This has been the case with other liquid paraffins on the market too, not just ours. (At least this is my understanding, I don't want to speak for any other brands).

In general, even if the snow is super cold, dry, and slow, the HPLP over the HP hot wax was better except for the tricky part of new falling cold snow. If the new falling snow is glazing readily, this is not an issue. It's only with more arid (dry) new falling or fallen snow.

Another important point, is that this wasn't necessarily a fair test in many cases. We tested mostly HP hot wax Red (for example) against HP hot wax Red covered by HPLP Red. What I mean is that the hot wax was the same in both cases. We did this as sort of a worst case scenario. We did also test what I would recommend waxing with the HPLP which is the following: 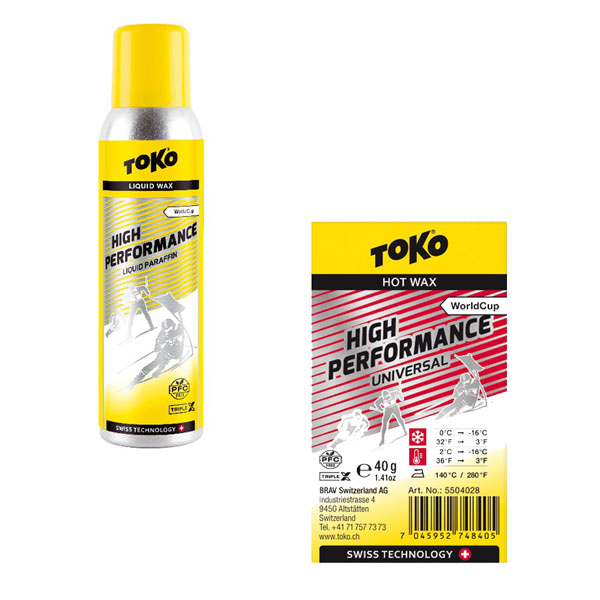 Using a harder underlayer yields a benefit that exists only when combined with a liquid paraffin that isn't heated in. The harder underlayer in general is more durable, more resistant to dirt, and accelerates more quickly (earlier). When you cover it with the HPLP (even one color warmer such as Red), you get the benefits of the HPLP (slipperier and more hydrophobic) without giving up the other benefits because you didn't heat in the HPLP thereby softening the ski base. This is a key point. So, in general use a harder base (most commonly HP hot wax Blue) under the HPLP.

If the snow is dry at all, I would also caution you to go with the HPLP (or BPLP) Blue. This is awesome stuff with a huge range on it. In the Intermountain west where our snow (and air) is notoriously dry, between Dec and mid February, I'd say the HPLP Blue over HP hot wax Blue is the wax 90% of the time. It's simply and very effective!

Be careful about using the HPLP in new falling dry snow or new fallen dry snow where the new dry snow is sitting on top of already groomed snow. If it has been tilled in and then skied in, I would go with the HPLP with no reservations.

I should also mention that all liquids can be suspect in dirty snow. If the race is short or if it is not that dirty, probably there is no reason to concern yourself, but if the conditions are very dirty, I'd avoid the HPLP and go with HP hot wax with HP Black hot wax underneath or mixed in depending on the conditions.