PARK CITY, UTAH (January 20, 2022) — U.S. Ski & Snowboard announced today its nominations for the U.S. Olympic Cross Country Team to represent Team USA at the Olympic Winter Games Beijing 2022 from February 4-19, 2022. Nominations are to be confirmed by the United States Olympic & Paralympic Committee when it formally announces the U.S. Olympic Team.

Fourteen athletes were nominated to Team USA, including the 2018 Olympic gold medalist and defending World Cup overall and distance champion Jessie Diggins, and two-time World Cup winner Rosie Brennan. Brother and sister Caitlin and Scott Patterson, both 2018 Olympians, are also nominated to return to the Games. The 10 remaining nominated athletes will be competing in their first Olympic Winter Games.

“We are incredibly excited to be welcoming so many athletes to their first Olympic team,” said U.S. Ski & Snowboard Cross Country Director Chris Grover. “We’ve been watching this American talent emerge at World Juniors for the past five seasons, and now these very same athletes that have brought home so much hardware are populating the Olympic team. Beijing will be such a valuable experience for them as they progress towards being medal contenders at the highest level. We are also lucky to have the experience, leadership, and professionalism of athletes like Jessie Diggins and Rosie Brennan to show these young athletes what it takes to be successful at this level.”

The 2022 Olympic Winter Games will feature 12 cross country events, including four individual events for both men and women and two team events for each gender, including the team sprint and the team relay. At each Olympics, disciplines swap between freestyle and classic techniques. For example, Diggins and Kikkan Randall won the freestyle team sprint at the 2018 Games—the first-ever Olympic gold medal for the USA in cross country skiing. The team sprint hosted at the 2022 Games will be held in the classic technique.

Cross country kicks off the 2022 Games with its first medal event, the women’s 15k skiathlon on Saturday, February 5. The event features two 7.5k legs, with the athletes skiing the classic technique for the first 7.5k, then switching to the freestyle technique for the second 7.5k. The men will compete in the 30k skiathlon on Sunday, February 6— a 15k classic followed by 15k freestyle. The complete Olympic cross country program is listed below. 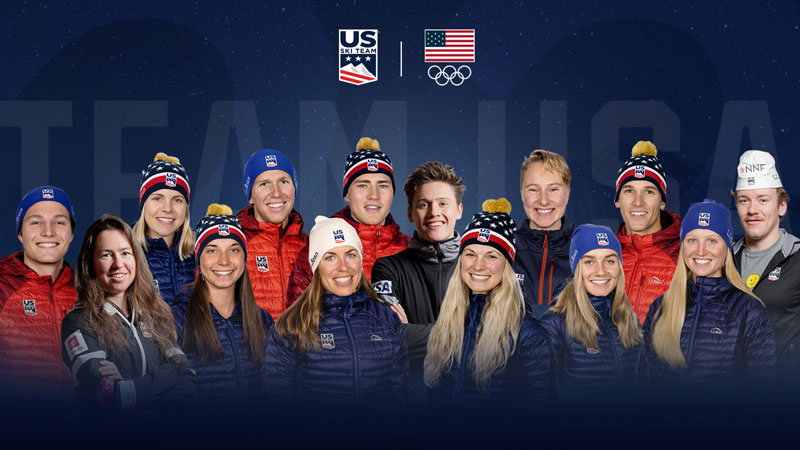 Watch Team USA compete on the networks of NBC throughout the Olympics, February 4-20, 2022.

“I’m honored and excited to be representing my country once more as a member of the 2022 Olympic team! This will be my third Olympics and I’m so proud of all the hard work and dedication from all our athletes to make this team. I’m also incredibly thankful for the support from so many people who have helped me prepare for the Games! I won’t be racing for just myself out there.”

“I am very excited to be named to the Olympic team, it is a dream come true! I believe the team we are bringing is really strong and will do great things at the Olympics. It takes a massive support system to get there and I am extremely thankful for all of the people who have been a part of this journey.”

“I am honored to be representing Team USA in another Olympic Games. I am very excited to be on this team and to be in a place where we can fight with the best. I am looking forward to getting there and getting the races started.”

“More than anything, I feel honored to represent my country on the world stage at the Olympics. I have dreamed of the opportunity to do this since I was a kid and it hasn’t totally set in for me yet! I think it won’t feel real to me until we actually arrive in Zhangjiakou. I am really looking forward to finishing my preparations knowing I am ready to fight with everything I have out on the race courses. Going into my first Olympics, I’m not sure what to expect, but I am going to try to stay true to myself and do what I know how to do!”

“I am super excited! The Olympics have always been the dream and it’s surreal to have actually made the team! Going into this season I was very uncertain of what it would hold, but it’s been full of so many great experiences and it’s pretty hard to believe that I also get to go to the Olympics. Just overall, I’m feeling quite happy about things and very thankful for everyone who has helped make all of it possible!”

“I’m so so excited. It’s pretty incredible to actually be named to the Olympic team and I still haven’t fully wrapped my mind around it. Even just a year ago, the Olympics seemed far-fetched, so it feels pretty surreal. That being said, I am so excited and grateful for the opportunity. It’s definitely a proud moment and I’m looking forward to the whole experience and learning a lot from it, and I especially can’t wait to see what the U.S. team can do this year!”

“I’m very excited to be heading to my second Olympic Games! The U.S. is bringing a strong group of cross-country athletes and I’m looking forward to seeing what we can do!”

“All of my emotions are on overload. I am beyond proud, beyond grateful, and beyond excited and honored to be on the 2022 Olympic Team.”

“I’m super pumped to be named to my first Olympics! Pretty crazy feeling. It’s still kinda hard to believe it! Can’t wait to get over there, enjoy the experience and race the best I can!”

“It's every kid's dream come true. It's something I’ve been shooting for and dreaming of for a long time. And to be able to call my family and give them the news is just as satisfying as getting the news myself—they are just as much a part of this journey as anyone. So now making the team is the last stepping stone to my ultimate goal and that is to return from Beijing with the result I want! And I couldn’t be more excited about the men’s team I get to travel there with. It goes without saying the men’s team is putting up big results on the World Cup, and now I think we can expect some big results at the Olympics! Time to go have some fun!”

“I’m really excited to be named to the Olympic team. Growing up in southern Vermont, I have been inspired by Olympians my whole life, and becoming one myself has always been a dream. I am excited to race hard and have some fun in China.”

“I really have to stop and give myself some credit because it’s a lifelong dream coming to fruition, but at the same time my goals keep coming, and just making the team isn’t the end of the road. I wanna race fast! But overall I’m very excited for the opportunity to represent the U.S. on the highest level in my sport.”

“This is a dream come true for me! I remember being a little kid watching Kikkan (Randall) and Andy (Newell), Simi (Hamilton), and crew at the Olympics and getting so fired up. Feels pretty crazy to get to be here now a few years later with my best friends. I feel so thankful for all the people that have worked so hard over the years to help us get here!”

“Races at the 2022 Olympics have been on my goal list for a long time. I’m excited to return to the Olympics and build on the successes I had in 2018. We have a strong contingent of U.S. athletes and I look forward to being a part of it!”