Sunday was the first race at US Nationals at Soldier Hollow in Utah. The conditions were extremely cold with some new snow mixed in with some non transformed manmade snow. This made for pretty hard fast snow despite the -11f temperatures at 7am. Temperatures stayed cold (for Utah at least) all day with the air temperature hitting around 10f when the final happened.

You might remember but these are the exact conditions that I was anticipating for Soldier Hollow during nationals. Soelden 15 is a test wax (a non fluorinated top coat) that did extremely well in testing two weeks ago so I contacted our chemist and he flew some out to me for the races. Between Saturday and Sunday I heard from 8 teams specifically about what they were testing and how things were running. Of those 8 teams 6 told me that Soelden 15 won their wax tests either Saturday or Sunday.

Despite the cold temperatures, except for Soelden 15, fluorinated waxes were the best on the day. I know of one team that went with a hard paraffin only and they clearly had poor skis in the qualifying round. Another team had good skis with straight XCold powder though. 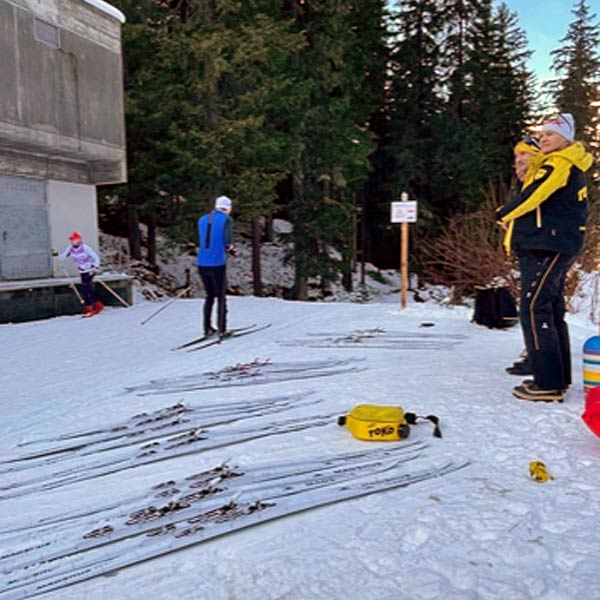 So, this is exciting as we are showing that the non fluorinated waxes are highly competitive at a high level of competition. This was what I was saying as soon as the fluoro ban came forth - "it's OK! It's up to the wax manufacturers to come up with products that are both as fast or faster than the fluorinated waxes as well as non toxic". We are demonstrating that we are getting there and that Toko continues to be on the forefront of research and development. I have great faith in our R&D team as they have consistently shown that they are industry leading.

The temperatures for the rest of the US Nationals week will be substantially warmer with lows only around freezing and highs around 40f each day, so I do not anticipate Soelden 15 being competitive with the traditional fluorinated topcoats that the teams will surely be using. We do however have other fluoro free topcoats that are being tested and further developed that will be competitive with these fluorinated topcoats which will soon be banned for good from US competitions.

Another quick point is that the new High Performance Hot Waxes are doing very well. At events where fluorinated topcoats are being used, the base layers are less emphasized, but this will not be that case for long and these superb fluoro free waxes will play a big role. It's an exciting time to be working for Toko!