End of an Era: Sten Fjeldheim retires after years of excellence

MARQUETTE, Mich. – Northern Michigan University's most decorated head coach, Sten Fjeldheim, will retire after 34 years as leader of the Wildcat Nordic ski team. He also served stints as the head cross country running coach during his 35 years at NMU.

Fjeldheim coached 102 skiing All-America award winners. He attributes some of that success to recruiting student-athletes who were a good fit for the culture he created around the program.

"If you have a culture of having a strong work ethic, knowing how to win and how to lose, and of being good at everything you decide you want to do, then that's the type of kid I wanted in my program," he said.

"I always rolled up my sleeves and tried to do the best job I could. It's precious cargo I was hauling around. It's people's families and kids and I've always had that in the back of my mind. I'm fortunate in many ways to have met all of my student-athletes and also fortunate that their parents put their trust in us. I made sure that I always kept the rubber down on the road and made sure that I had my thumb on the heartbeat of the team."

"Sten's accomplishments are legendary and what I will always appreciate most is his positive impact on co-workers," said NMU Director of Athletics Forrest Karr. "Sten often says, 'First you form an attitude then it forms you.' For decades, he inspired everyone around him to be and do more. Sten's attitude and work ethic built NMU skiing into a nationally recognized program and he did it the right way prioritizing student-athlete wellness and encouraging academic excellence. I would like to thank Sten and Pam for their dedication and lasting contributions to Northern Michigan University." 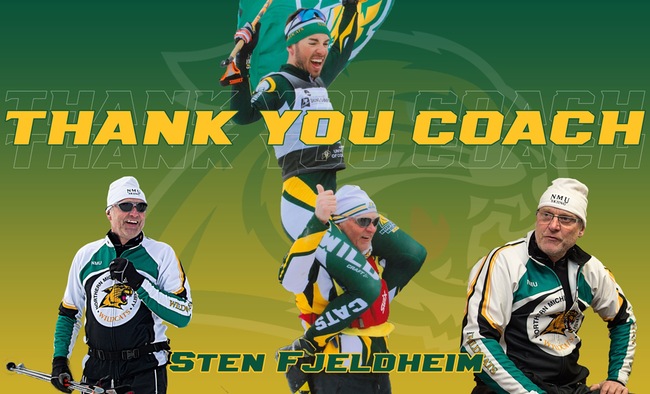 The following are some of the accomplishments teams coached by Fjeldheim were able to achieve during his time in Marquette:

For Fjeldheim, what happened academically with his teams is just as important as what they accomplished in athletic competitions.

"One of the things I am most proud of is that the grade point average of the ski team has been the highest or tied for the highest with the women's running team for the 35 years I've been here," Fjeldheim said. "We've had several outstanding graduating seniors in their departments, and really if I didn't have such a great group of young adults to coach I'm not so sure I would have stayed in coaching. I have never had any issues with discipline or motivation."

During his time at the helm of the skiing program, his NMU student-athletes achieved the following honors and accomplishments:

When prompted to share some highlights that came to mind, a few were based on the competitions on the course.

"Having four athletes on the 2016 Olympic team was really exciting," he said. "Of course Peter Vordenberg winning the NCAA National Championship in 1993 I'll never forget. We had just moved into the NCAA in 1992 and to have a national champion a year later was really exciting."

Another highlight that came to mind was much more simple and all about him connecting with the team and having them connect with each other.

"To be honest with you some of my fondest memories were the van rides before technology took over, Fjeldheim said. "I ask the student-athletes now to put their cell phones away for an hour or two so we can all have that time together. If you want to know what the cafeteria is like just ask me. if you want to know what the dorms are like just ask me," he added with a laugh. "I'm with them in the van for 8 hours and you hear the funniest stuff."

The longtime coach got his start at NMU as a student-athlete. He skied three seasons for the Wildcats and graduated in 1986 with a bachelor's degree in physical education. He still remembers how he was offered his first job at the university.

"I was approached by former Athletic Director Rick Comley in the hallway of the PEIF. The cross country running coach had recently left and the ski position was also open, so he asked me if I wanted to give it a shot. I did," said Fjeldheim.

Comley also looks back at the decision to offer the position to Fjeldheim fondly.

"Years ago I had an opportunity to hire a successful National Team coach and bring him into NMU," said the former Wildcat hockey coach and director of athletics. "It was the best decision I ever made, and he went on to become the most successful coach ever at NMU. Congratulations, Sten, on an amazing career and thank you for teaching us all what it took to develop an All-American."

Fjeldheim said he started to consider retirement a couple of years ago when his wife, Pamela, had benign tumors discovered during a routine eye exam and had to undergo major surgery and intense radiation for weeks. Going through that season of life made Fjeldheim think about the bigger picture.

"At that point, I realized we're not as young as we used to be and that life is precious, " said Fjeldheim. "It had been many many years since Pam and I had a free weekend to be together. Then my children started having babies and it's very difficult for me to leave at any point because I just feel like you know if you don't keep your thumb on the heartbeat of your program what are you doing?"

"I felt like I had to be here for the team because it's my responsibility. After Pam went through that summer I really started thinking about how can I make retirement happen? I wanted to spend some time not just with her, but with my kids and my grandkids," added the coach.

In addition to the various accolades won by his team, Fjeldheim himself was able to take home all of the following honors in his esteemed coaching career:

Fjeldheim credited the community of Marquette and NMU for his decision to remain at the university for an extended career.

"I did have some other job opportunities at bigger schools, but every time I thought about them it came to 'why would I leave Marquette.' Everything is accessible and we have skiing and running right out the door. Basically, the community and the university kept me here. This is an incredibly special place."

While no longer the leader of the program, Fjeldheim's involvement with the Wildcats is far from over.

"I really feel like as we get older we get wiser. I still have the passion to be a coach, but I don't think I can use my time for the amount it requires to be the head coach," said Fjeldheim. "I will support the new coach 100 percent in any way I can. If the new coach is interested, I plan on being some kind of a volunteer and just helping the new coach slide into this job."

As he comes to the end of his time at NMU, the coach is looking back fondly while also looking ahead.

"I had this opportunity and I was bound and determined to show that our student-athletes and our sports are worthy. I feel like I met my goals, so I'm a happy camper."