The Boyne Vistas did not go as planned...at least not the way *I* planned it.

I get a little cranky when I have to get up at 4:45am to make the long drive to Boyne Mountain. We down-staters should be spotted 5 minutes just for the drive! Do you know how hard it is to get out of bed before I've had my morning espresso?

Tony Percha and I were caravanning again. Separate cars, social distancing, keeping it safe. Our rendezvous point was to be at 6:15am at the Starbucks at Birch Run. We wanted to get going early because of snow on the road. We were NOT going to miss this race!

So he arrives 15 minutes late. He gets his cappuccino. Me? Its a Double-Smoked Bacon, Cheddar & Egg Sandwich, a piece of Cinnamon Coffee Cake, and a double espresso to wash it down. The breakfast of champions! I'm feeling so much better!

One bathroom break and -8F as we pass through Grayling, we make it to Boyne with some time to spare. Grab our bibs and head to the chairlift. 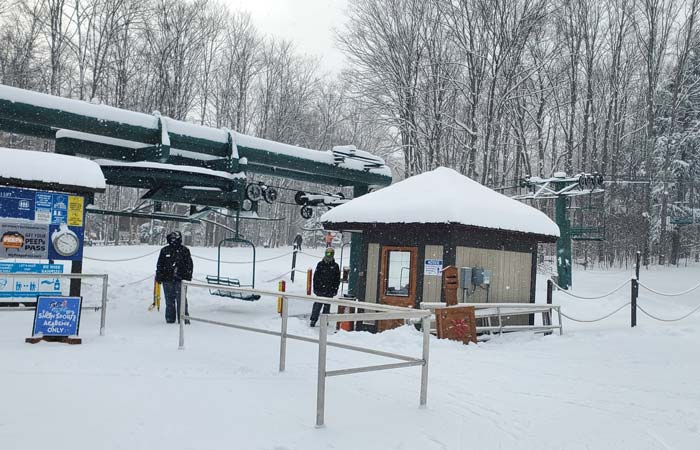 "Chairlift?" Normally, the race climbs Hilda's Hideaway, and easy slope (if you're going down) but quite a climb for the first kilometer of a cross country ski race! But no Hilda's this year. But the race course on the Boyne Vistas trail is at the top of Boyne Mountain, so you either ski up it or take the chair lift. We thought about skiing up ("Real Skiers Ski Uphill") but we were worried we might not make it to the start in time. Really. We could have climbed it if we had a few more minutes.

And if we had skied up, we would have missed watching Doug Cornell's water bottle pop out of his waist belt and drop like a missile to the snow 70 feet below him. The bottle went deep! I bet it went into the snow two feet!

The chairlift operator slowed the lift as Tony and my chair hit the top. I'm sure he noticed Tony's apprehension of the big mountain and of the prospect of losing to me AGAIN, so he slowed it just for Tony. Nice guy!

I expected fluffy soft conditions and was surprised by the firmness of the trail. But no track. That's not going to make a few people happy - there are always classic skiers doing freestyle races on the Michigan Cup circuit. And "freestyle" does mean you any technique you want. (Hmmm...my new dog Journey likes to pull when we're walking. Can I skijor on the Michigan Cup? Can I at least have my dog bite Tony?). 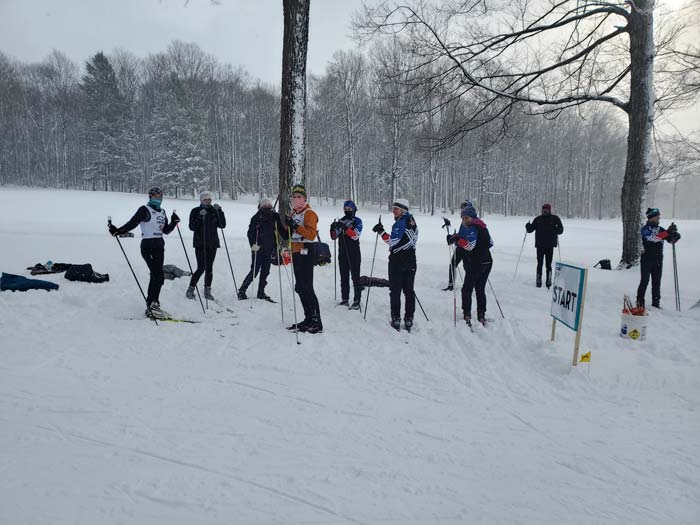 Skiers we're masked and hanging out before the race. The start line was well marked. Skiers started in 15 second intervals. I was number 10. What? Tony is number 15. I hate having Tony behind me! I prefer him to be the rabbit. Wonder if I can switch bibs with him? He's going to stalk me the entire race! 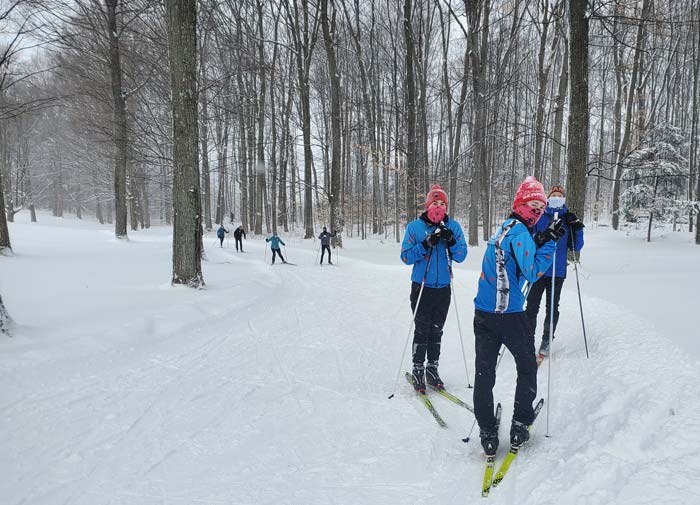 The race course is nice and wide - it will be easy to pass people. I have a soft flex pair of skis with a cold grind. At least I think they have a cold grind. They had a cold grind when I bought them 10 years ago. But they sure don't feel fast. Warming up was a chore! What wax are other people using? Are my skis slower?

Slow soft snow has never been my forte. Give my fast conditions, some wicked downhills, some technical challenges and I'm great. Slogging? I'm just not a slogger.

Is Tony a slogger?

I start. I quickly pass Jolene who started 15 seconds ahead a me. GO JOLENE! GO TEAM NORDICSKIRACER! I look back to see how Jolene's doing when Milan Baic blows by like I'm standing still! It must be the skis. Milan obviously has some secret wax. It's just not fair!

The course for seniors is three laps; two laps for juniors. I'm halfway through the first lap and I'm thinking "What the HELL am I doing in this race!" My skis are dogs! (No offense Journey - you're a great dog! Woof Woof!). I'm sure its not that I've hardly trained on a hill in the last two months and have been working too many hours at work, and didn't sleep enough last night, and should have ordered a quad-espresso.  And the downhills? Not only are they slow, but a stiff wind is blowing UP them slowing me down even further. The uphills? BRUTAL. And I have to do this loop how many times???

I survive the first lap and actually feel better on the second. Halfway through I spot Tony. He looks like he's suffering. At least I hope he's suffering. I'm suffering. Everyone should be suffering. It's a SufferFest! But I don't think he's gaining, that's the good news. I think of Ernie Brumbaugh during the warmup: Are those peace signs or victory signs? I'll be at peace if I have a victory! 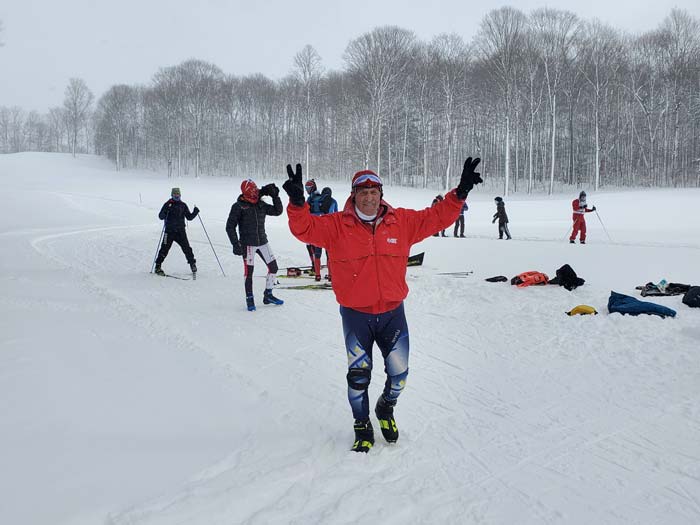 Did I say the the course was nice and wide and great for passing? I keep getting passed. I try to hold on to the passing skiers but to no avail. By the third lap, my suffering has reached new heights. The quads, hamstring, and shoulders are CRYING. I want to plug my ears to stop hearing the crying but then I wouldn't be able to pole.

Only a kilometer from the end ... What the??? Tony's passing me! That's not in the plan! I pass him back on the next downhill because that's what I do. I can tuck with the best of them and most Michigan Cup skiers plow wind and snow on downhills. I hold him off until the final steep climb and...and I'm toast. There's nothing in the legs but pain. I watch him slowly move away from me.

Actually, it's not that slow. He skis off into the distance likes he's Milan Baic.

I felt really bad when I was passed by the grandmother with a pulk just before the finish. That pulk must have given her a HUGE advantage on the downhills.

I think Tony had a pretty good race (he's that shorter guy next to Doug Cornell in the picture below). He's got the talent for slogging. Or fast skis. Whatever. Kudos to him. I'll get him in the next race. 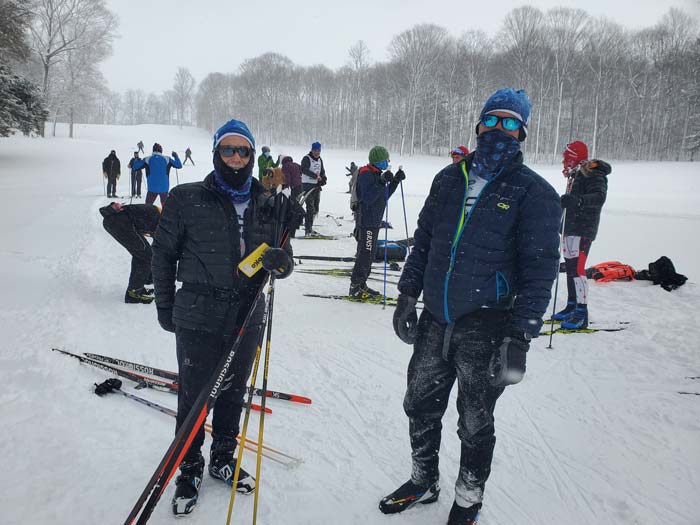 So how did everyone else do?

The results are preliminary - there's one error for age groups and gender, so I'm waiting for an update. Preliminary results are here (PDF).

Men's 12km? Jorden Wakely took another win, narrowly beating Sam Holmes, 41:07 to 41:12. Sam started several minutes back - it could have been really interesting if they had started within 15 seconds of each other! Milan Baic took third in 47:04.

Thanks for the great grooming Nick Baic! Can't believe you packed all that snow down into a race course!