UPDATE January 20, 2020: We found an error in the start time of two racers. When we fixed the times, Yvon Dufour and Steven Smigiel Jr moved into second and third place overall for the men in the 12k Krazy Klassic. Sorry for the error.

Don't tell Adam Haberkorn or Ken Roth, but the REAL reason I spent so much time organizing this weekend's racing was for one very important reason: to beat Tony Percha. After a lazy summer of little activity, my fellow teammate forced me to train with him at dawn and sometimes - GASP! - before dawn, with headlamps ablaze. Gradually he got me back into shape so I could beat him.

Well, he probably planned to beat me if truth were know. But not a chance.

So you think I really care that that Michael Davis put in an incredible performance to win the 12k Krazy Klassic 32:20.9. He double poled the entire course, a tactic done by many or most of the top skiers in the race. And those skiers also included second and third place finishers, Yvon Dufour and Steven Smigiel J. who completed the race in 33:06.0 and 33:12.0. 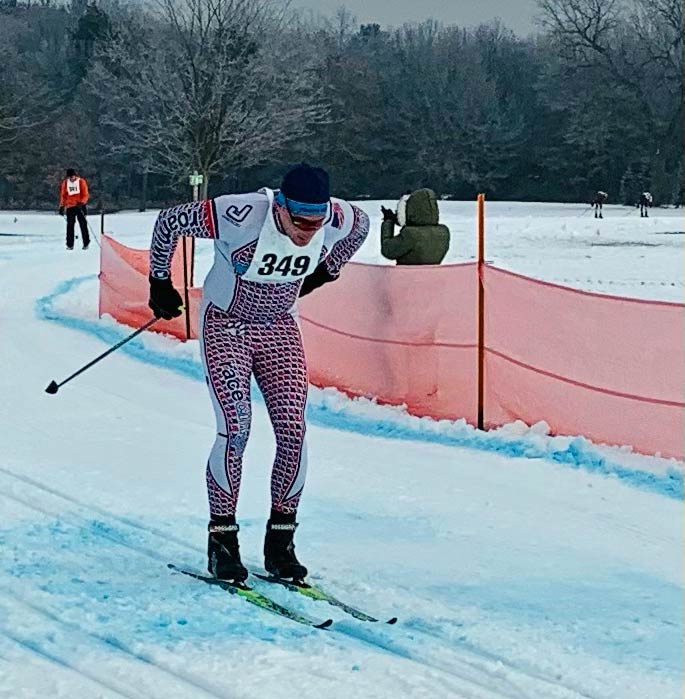 Well, actually I do care. Michael's cool, and Yvon is a teammates on Team NordicSkiRacer, and any Smigiel is a good guy 'cause they are ski crazy!

Allen, just so you know, Yvon Dufour thinks he beat you! The jury is still out (out skiing I think), and we'll get back to you in a few days...

Jenna Briggs was the top women in the 12k! Congratulations Jenna for skiing away from the field in 52:18.2! (Jenna, do you belong to a Michigan Cup team? We'd love to have you on Team NordicSkiRacer! https://www.skisignup.com/TeamNSR. Don't tell the other teams...) My teammates Skye Schultz and Kirsten Hensley beat the rest of the field taking second and third in 58:41.1 and 59:22.7.

So I guess I do care. But let's get back to Tony, my training partner and arch nemesis. Well, nemesis is too strong a word - Tony is an awesome teammate. But he wants to beat me. Can't let that happen.

I was successful in the Frosty Freestyle. We took turns pulling the other each lap. It was his turn to pull on lap 5 and I could tell he was getting tired, so on the way to lap 6 I jumped around and never looked back.

OK, I did look back. I got a good gap on him, but I could still see him, and he wasn't losing ground. But he wasn't gaining either. And I crossed the finish line with a comfortable lead.

(We have to choose our battles).

We had wave starts today, just like yesterday's Frosty Freestyle. Is was slightly cooler and cloudy, but still no real wind. Tony and I were in the 3rd wave. I has setup my Garmin Forerunner 945 to display distance and laps on the display. I worked great for the Frosty and I know exactly where we were. (I will admit I double-checked with Tony toward the end of lap 5 BEFORE I BEAT HIM).

I was moving displays around when I accidently pressed start, then stop, then the wave - and Tony - left me behind as I fiddled with my heart rate monitor to get the right distance, time and lap counts for the race. Tony was to the woods before I left the start! Fortunately, we were chip timing so not to worry.

But I did worry. I wanted to pace Tony to victory. So I charged like a madman to catch up. It took me a lap, but I made it and passed him! 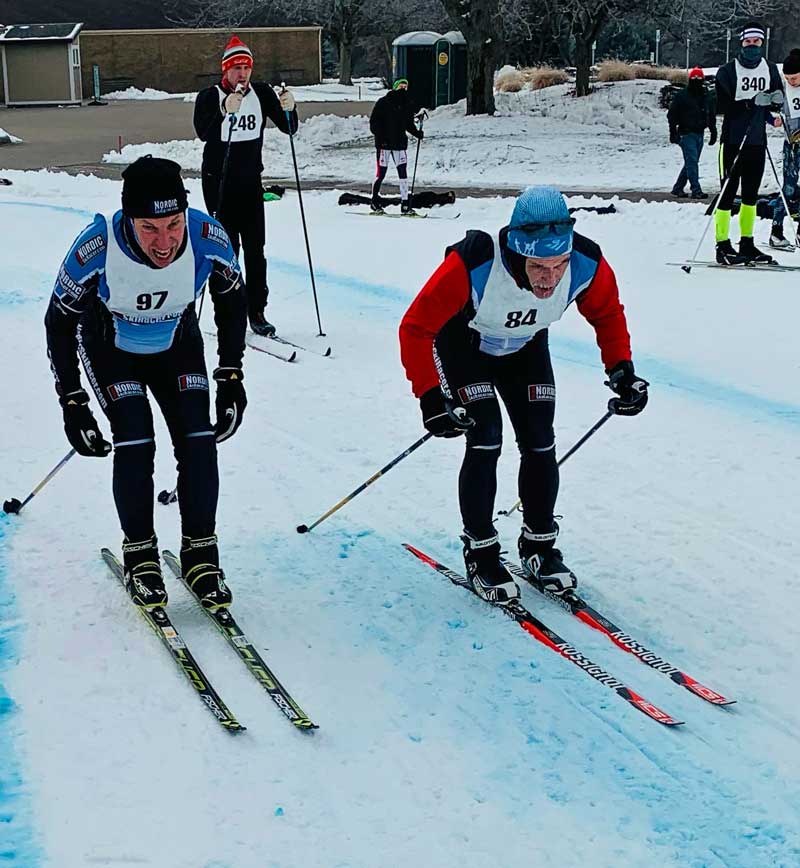 I take the inside to Tony's right and PASS!

I felt invincible! I was magnanimous and let Tony draft. If a faster skier came by, though, I jumped behind to see if I could drop Tony.

Damn. He's still there. And I tried numerous times to drop him. We finished the fourth lap and Tony yells, "There's Doug Cornell! We can catch him" . Tony takes the lead and I draft.

Well, I try to draft. Double poling a classic race is hard! He's gapped me by the woods and continued to pull ahead slowly but surely. Maybe I shouldn't have sprinted to catch him in that first lap. I try my best not to lose ground but I lose sight off him...until the last straightaway in the woods. I round the last right corner and see him down the trail. I HAVE TIME TO CATCH HIM!

I can't. Tony beats me. My soul is crushed.

I put on the happy face and congratulate him on his victory. It's well deserved. And he is my good friend. Couldn't have happened to a nicer guy.

And there's the Cote Dame Marie next weekend... Two out of three?