Senior Sarah Goble placed seventh in the skate at the NCAA Championship, earning All-America honors after qualifying for her third straight championship. She was also all-region in both the classic and skate as a First Team All-CCSA selection after winning three individual CCSA races. Goble also competed in the U23 World Ski Championships in Germany. She is graduating with a bachelor's degree in economics.

Junior Reid Goble was all-region in both the classic and skate races. He was named First Team All-CCSA after five podium finishes in conference races. Goble placed 24th in the skate at the NCAA Championship to wrap up the season. In the US Nationals, he placed 17th overall, seventh collegiately, and third in U23 at the 30K classic. 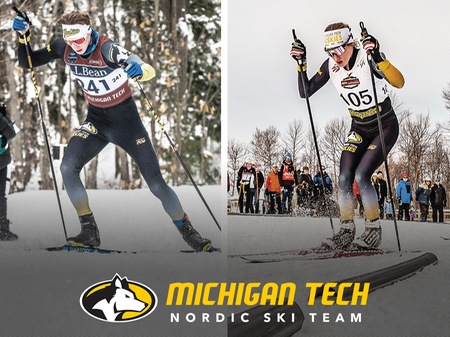 Senior Amanda Kautzer received the Scholastic Achievement Award after her 4.0 grade-point average in biomedical engineering. Kautzer was the Elite 90 Award winner at the NCAA Championship, leading all participants in GPA. She was all-region in classic and skate and was also an All-CCSA Second Team selection. She also competed in the U23 World Ski Championships in Germany and participated in the NCAA Championships for the third straight season. Kautzer is graduating with her bachelor's degree this spring.

Junior Patrick Acton earned the Scholastic Achievement Award on the men's side with his 4.0 fall and 3.92 cumulative GPA in pharmaceutical chemistry. Acton qualified for the NCAA Championships for the second season in a row. He had all-region finishes in both the classic and skate and was named All-CCSA First Team. He led all CCSA skiers with the 15K skate at the US Nationals

Sophomore Oda Hovland was recognized with the Most Improved Skier Award. She qualified for the NCAA Championship and was all-region in both classic and skate. Hovland finished second in the 10K classic at the Gitchi Gami Games and was an All-CCSA First Team selection.

Junior Mark Ousdigian received the men's Most Improved Skier Award after qualifying for the NCAA Championships. He was an all-region skier in the skate and had five top 10 finishes in CCSA races. Ousdigian finished second in the 50K skiathlon at the Great Bear Chase.

Freshman Henriette Semb was honored with the Harold Meese Sportsmanship Award. She was All-Region in both classic and skate and was an alternate at the NCAA Championships. Semb earned All-CCSA Second Team honors after she placed second in the 10K skate at US Nationals and second in the 5K skate at the UWGB Invitational. She was the sixth-place qualifier in the skate sprint at US Nationals.

"We have been incredibly impressed with Henriette's competitive team spirit as a true freshman on our team," Monahan Smith said. "She always races for the team, not just herself! At the Birkie Start this year she came in sixth place and was disappointed after the race not because she didn't get the result she wanted for NCAA Championship qualification, but because she felt she let the team down. She still dug deep enough for us to get the team win that race day and proved just how much she values team results, not just her own. She was an alternate for us at NCAA Championships, having qualified for the Championships but ranking as our fourth women on the team. She trained relentlessly up to the Championships being ready to jump in for the team if we needed her to and continued to push our qualified women in training. When our other three women stayed healthy to compete she showed incredible poise cheering on her teammates with full force. Henriette will no doubt be a driving force competitively for our team moving forward with our team graduating both Sarah and Amanda after this year, and we are thrilled to have her strong competitive team spirit with us to continue to push our team's success."

Sophomore Mitch DeLong received the Harold Meese Sportsmanship Award. He qualified for the NCAA Championships and was an alternate. DeLong was all-region in both the classic and skate and had six top 10 finishes in CCSA races.

"Mitch was a captain for us this year as he truly encompasses everything we look for in our student-athletes," Monahan Smith said. "He is positive and has respectful representation at all times, competitive drive to get better and push his teammates to get better, and a love of the lifestyle/his opportunities/the student-athlete experience. Mitch showed complete and unwavering selflessness to the team in supporting our student-athletes that raced for the Nordic Huskies at the NCAA Championships. He jumped in to help wherever and whenever he could at the Championships and became an incredibly key member of our coaching staff during the skate race day. Mitch is a scholar, a true gentleman, and will always lighten up the mood of our team environment with his kindhearted greetings and witty puns."

Senior David Jaszczak is also graduating this spring with a degree in chemical engineering.