What wax to use when?

Although I get requests for "temperature ranges of the waxes" all the time, I am always uncomfortable answering this in a simple manner. This is because I am really trying to help people rather than just tell them what they want to hear.

In this case, there is no simple answer. In order to do a decent job waxing (above using All in One wax all the time or Express waxes), a person has to understand snow a bit. 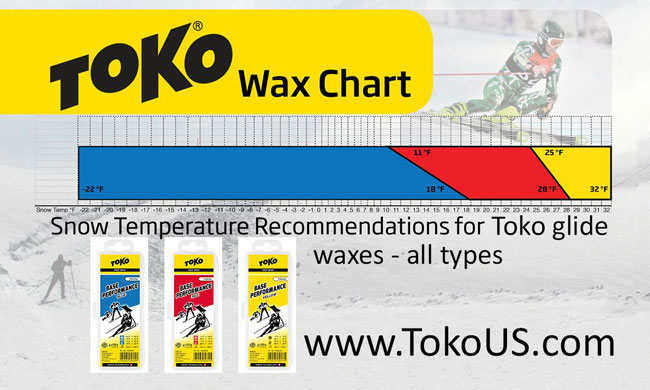 Above you can see a "wax chart". This wax chart is better than most although it looks very simplistic. It is better because it uses snow temperature rather than air temperature. Then again, many people have no idea what temperature the snow is, so is this useful at all really? You can also see that the temperature "limit" lines are not straight up and down but rather there is quite a variation (for example the colder end of red is between 10f and 18f, same as the warmer end of blue. (I think both of these should go even warmer). Why is this? Because snow temperature is only one indicator of what wax will work when/where. There are many other factors that also play a role.

The role of air temperature

Air temperature is a precursor of snow temperature. In other words, air temperature leads or predicts snow temperature. For example, if the air gets down to 10f overnight (7am), the snow will get quite close to that. Then as the air warms, let's say at 10am the air is 20f, the snow will warm slower and at 10am might still only be 13f. As the air continues to warm, so will the snow, but it will lag behind. Understanding this is critical because something that I see very commonly is people using current air temperature to select their wax (or forecasted high temperatures) which often yields gross errors. When air temperature is pretty constant between night and day, then there will be less issues doing this. What often times happens is that a person uses yellow wax when the air is 30f although the snow is still holding much of the cold temperatures from the cold night and is still only around 15 or 20f. This will yield slow skis or for Nordic grip waxing some really big complications (sticky wax that won't last very long).

So, it is always good to guess at the snow temperature (or measure it with a snow thermometer) which isn't too difficult. In the morning if the overnight low was far lower than the forecasted daytime high, the snow temperature will be between the overnight low and the current air temperature. In the afternoon, the snow and air will be far closer as the snow has had time to warm. And in the late afternoon, you have things going in the other direction. As the sun goes down and the air cools, the snow will be warmer than the air.

OK, so what other factors will affect your wax selection other than snow and air temperature? Keeping things simple, there are two main things that you are looking for. One is how much free moisture is in the snow. The colder it is, the less free moisture is in the snow. Humidity also affects the moisture content of the snow either positive or negative. Clearly the Rockies have snow that contains far less moisture on average than snow in the Sierra Nevada, Great Lakes area, or New England. This means given the same air and snow temperature, you will need to wax "colder" in the Rockies compared to these other more humid regions. If snow is windblown, it generally is very dry. Graupel is a type of snow that resembles styrofoam balls. It often times falls at around freezing. Despite the warmer temperatures, this snow "skis" extremely dry and cold. Also, if the snow is well skied in it acts warmer compared to if it is not skied in at all due to the moisture build up or glaze that generally occurs.

Is there a way to summarize or generalize? Yes! Generally speaking, the faster the snow is, the "warmer" you should wax and the slower snow is, the "colder" you should wax. So if the temperature says you should be waxing with blue, but conditions are very fast, you could mix blue and red or even go with straight red. This change will yield overall faster skis and especially faster skis in the higher speed sections. If the temperature says that you should be waxing with red, but the snow is cold and slow, for sure go with a blue/red mix or straight blue for better acceleration. The exception to this rule is in super wet slow new snow. In this case, wax "warm".

So yes temperature (snow and air) is important to consider when selecting a wax of the day, but your most important tool in this decision is your understanding of the conditions overall.