The Effect of Ski Pole Basket Size on Forward Momentum

Last racing season, I frequently felt my poling was letting me down. I'd make what I thought were powerful pushes, but I didn't get the acceleration I'd hoped for.

It wasn't until I broke a pole and went training on a set of mismatched poles that I found one of the reasons for ineffective poling: ski baskets too small for conditions.

I'd been racing with a pair of high-end Excel poles with cool aerodynamic baskets (ski pole on the left in the photo below). I broke one of these poles while rollerskiing between trips to snow.

Back on snow, I substituted an old pole with a older-style racing basket (pole on the right in the photo) for the broken pole. Snow conditions that particular day were soft. As I skated, I notice I was getting much more power from the right pole with the larger basket: the basket would hit the snow and provide a large platform on which power could be applied.

The left pole? It just sank into the snow. 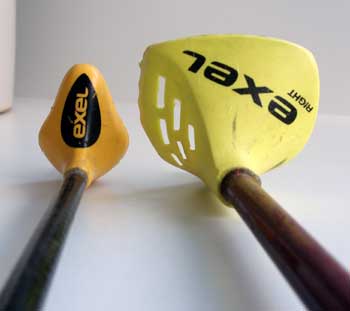 In soft snow conditions, all my abs did was power the too small basket under the snow rather than push me forward. My forward motion came mainly from my weaker lats and triceps. My abs strength was wasted.

The larger basket stopped the pole from sinking, allowing my abs to maximize forward momentum.

I've replaced all my tiny baskets with somewhat larger ones, and I'm carrying larger replacement baskets with me to races this season.

Bigger is better, especially on the softer race course we tend to have on the Michigan Cup race circuit.