The last time I'd rollerskied the Gallup Park bike path, the older small-wheeled rollerski I used were very uncomfortable over several rough sections of pavement. In fact, I'd sort of written off Gallup Park as a rollerski destination.

And here I was, testing a new pair Pro-Ski S5e skate rollerskis.

I'm happy to say my fears were unfounded, as the S5e's rolled over rough pavement, wooden bridges, and even a little hard-pack dirt ("Oops. It looked like pavement...").

The S5e is the latest iteration of Pro-Ski's 100mm diameter-wheeled skate rollerski. Many of you have read my very positive review and year later follow-up of the Pro-Ski S3, so getting a chance to compare them to the newer model was a treat.

Thanks to WebSkis.com in Bend, Oregon for giving me the opportunity to review these rollerksis. 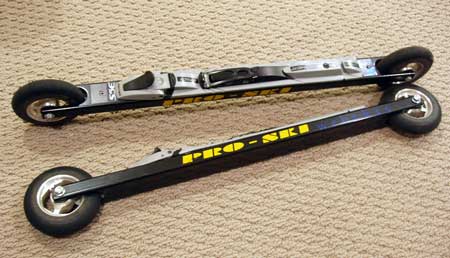 Although the S3 and the new S5e both sport 100 mm wheels, differences soon become apparent (see the table below). The Pro-Ski S5e is substantially shorter (800 mm vs. 550 mm) and lighter (by 200 grams) than my old S3s. Then there's the subtle difference in wheel width: the S5e has a smidgen wider wheel.

That extra 1 mm may not seem like much - and maybe it was just because the wheels on my S3s are worn to the nubbin, but the wheels, but I was very pleased with how the S5e cushioned and tamed the rougher pavement in Gallup park. The skis rolled easily over cracks in the pavement. When I accidentally rolled on to a dirt parking lot (I could have sworn it looked like pavement), the ski slowed but did not die. I would never take these on dirt purposely, but it's nice to know you can roll through short section if necessary, maybe when a bike path crosses a dirt road.

The skis also rolled well over a couple wooden bridges in a connecting park - a new section of trail I'd never been on. The lightness worked to my benefit - I had to jump over a hump to get on to one bridge.

I went to the end of the path at an easy of moderate pace, then turned around and did a speed session on the way back. Every couple of minutes I'd pick up the pace to full-tilt for 20-30 seconds. The skis were extremely stable and predictable.!

I would expect a medium-sized rollerskier doing extensive rollerskiing to get a year out of the wheels.

Speed-wise, the S5e’s feel like skis in medium-fast conditions. This makes them good for both distance sessions and interval sessions. You should be able to easily practice your V2 without getting bogged down but not get going so fast you can’t control your balance.

Underfoot, the S5e’s are very light weight and maneuverable. The maneuverability is partly a function of weight, but also of length: there’s very little swing weight to deal with.

As an experiment, I skied with an S5e on one foot and my much longer S3 on the other, both with identical wheels. I could feel the difference in weight and swing weight. It wasn’t a huge difference, but noticeable. To me, the nimbleness of the S5e gave it a bit of an inline skate feel; the swing weight of the S3 made it feel more ski-like of the two models.

I did two interval sessions on the S5e’s. I was very comfortable with skating fast on flats, ups, and gentle downs. Tucking the steeper downhills was no problem.

As with other rollerskis with 100 mm diameter wheels, the S5e does a fine job of snowplowing when you want to slow down. You can’t be going too fast when you start snowplowing and you need a wide stance – wider than on snow skis.

Although I did not get to test the S5e’s on wet pavement, my past experience with similar rollerskis is that you want to seriously avoid wet painted lines and wet leaves on roads and pathways. Skating on wet pavement should be OK.

I'm a big fan of fenders. Unfortunately, the Pro-Ski S5e’s shorter length (compared ot the old S3's) has eliminated fenders - fenders would prevent large boots from fitting on the ski.

Obviously, I wasn't able to test the skis to the point where I could wear out the wheels. My history with the S3, however, suggests that an average-weight skier doing extensive rollerskiing can get a good year out of them. Heavier skiers will have more wheel wear, lighter skiers or more infrequent rollerskiers less.

The metal frame appears beefy enough. I've gone several years on my S3's with no apparent metal wear - and if you've been looking at my training logs over the years, you know that I rollerski extensively.

This is a sturdy little rollerski that will provide you years of service. The Pro-Ski S5e is a fine ski. Inline skaters who are a little worried about trying out rollerski should feel right at home on them. Skiers looking for a very lightweight rollerski will also appreciate the S5e.

Full Disclosure: This web site's policy is that authors fully disclose any affiliation it has with vendors when reviewing their gear. In this case, http://www.WebSkis.com, the reseller of Pro-Ski rollerskis, pays to advertise on this site (assuming I ever get around to sending an invoice). - Mike Muha