A hard frost overnight guaranteed excellent conditions for the Nordic Ski Fest Season Opener sprint race at Brick Wheels in Traverse City on Saturday, October 22, 2011. The cold solidified the 55 trailers of snow cut from an ice rink by a Zamboni and dumped on the race course over the previous seven days. The course was well insulated from the ground by straw and salt was used to further harden the course. The course stayed firm during the entire race, especially from staff efforts to pack the snow with shovels and immediately repair divots.

This was the first ski race of the season in the United States. 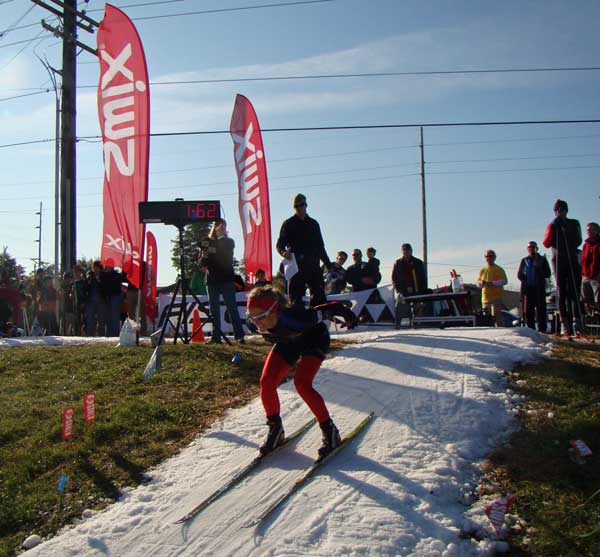 Forty-five degrees and bright sun shone down on racers. Each racers did a two lap time trial on the course. The top two in each 10-wide age group had an additional three lap showdown, where one racer started on either side of the course and raced to catch the other. Whoever was further ahead at the end of the three laps or who caught the other racer won.

Finally, there was also a ski-off between the top two women and the top two men, racing as many laps as necessary until one racer caught the other.

The narrow 100 meter course was tricky. There were tight fast corners, undulations, and, if you weren't centered in the lane, grass just off the edge ready to catch a ski tip. The course featured a short steep climb and a short steep decline.

VASA Ski Club skiers Amy Powell (31.18) and Susan Vigland (33.64) had the top women's times. In the final face-off to the finish, the two women were evenly matched until Vigland decided enough was enough. She climbed the hill, quickly turned around and skied back down at a shocked Powell, who looked up just in time to see a bullet headed her way. Collision avoided, Powell won the day.

Skiing early in the day, Mike Muha held the fastest time until the last skier and home-court skier, Eli Brown, crushed it. 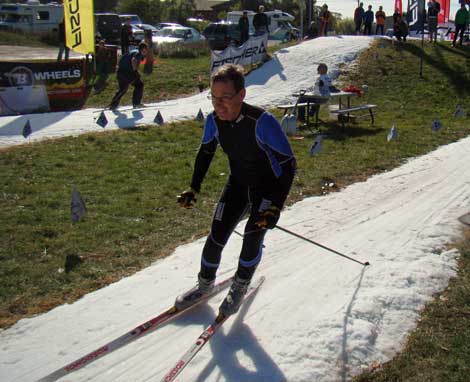 Mike Muha (foreground) and Eli Brown were evenly matched on the first lap of the ski-off.

In the men's ski-off, Muha and Brown were evenly matched for the first couple laps until Muha caught an edge coming out of a corner and went down. Up instantly, he nevertheless lost his rhythm and was caught by Brown within the next two laps.

Hot dogs, beer, chili, a ski swap and lots more post race skiing was had by all after the race.