There are two aspects to applying structure: the decision of what to apply and then the actual application of the structure. The second is the easy part. The first is the part that people tend to have problems with. I think the Toko Structurite tool that came out in the fall of 2009 will help a lot of people because it makes it easier to choose properly. 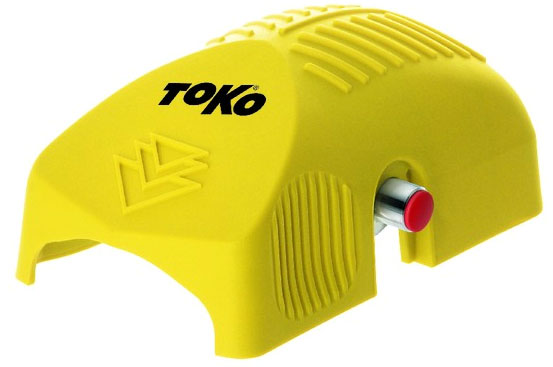 Obviously colder snow has less free moisture in it than warmer snow. When there is less moisture in the snow, a finer structure is better. When there is more moisture, more structure is better. Also, given the same amount of free moisture in the snow, when the snow is transformed (corned up), more structure should be used. Conversely, the finer the snow, the less the structure required. If the snow contains dirt, sap, or pine needles, it is important to lean toward less structure even if the snow contains a lot of moisture. This is because dirt tends to accumulate in the structure on the ski base creating friction. Lastly, the more skied in the snow will be, the more structure can be used. The less skied in, the less structure ought to be used. For this reason, it is important to consider if a race is a lap race where the snow gets very skied in or a course where the tracks get skied on only one time. Also in classic races of course the tracks get skied in far more than in skating races. For this reason, on average more structure is used in classic technique events than in skating.

Toko has come up with three main structures that perform very well on average. One structure works very well in cold (blue glide wax) conditions. It is fine and linear. Another works well in conditions below and up to freezing where red glide wax works. It is a pretty fine broken structure. When conditions are wet and a yellow glide wax is the call, we have a more aggressive broken structure that works well. These structures are named blue, red, and yellow corresponding to the waxes that they compliment best. If the wax used is appropriate, the structure of the same color ought to be really good as well.

In extremely wet snow, sometimes a deep linear structure (a rill) is necessary. This is generally found when the snow is extremely wet such as found in the late spring or when it is raining. The yellow Toko Structurite pattern is not aggressive enough by itself for this very wet snow. A rill (2mm perhaps) can be applied over the yellow structure. In less extreme warm conditions though, the yellow structure is very good. It is also good where there is dirt and it is wet as it is not as aggressive.

Put the appropriate structure bit in the tool. Slide the tool over the tip of the ski, press down, and while keeping maximum pressure, push the tool down the length of the ski all the way to the tail. Try to keep strong downward pressure on the tool the entire time. Also, be careful to weight the entire tool, not just one side of it. Should one side get more pressure than the other, the side with less pressure will have less structure applied. One solid pass should be enough. If the pass was not good for some reason (not enough pressure or uneven pressure), then reapply with one more good pass.

Most commonly, structure is applied after the HF layer is scraped and brushed out as ironing reduces structure on the ski base. For example, if I were waxing with LF Moly followed by HF Red covered by JetStream Red, I’d apply my Red structure after ironing, scraping, and brushing out my HF Red. Were I to apply the structure before applying the HF Red, it would make it smoother and less aggressive. This is done rarely. Structure can also be applied at the start over the race wax if necessary. When I do this, I prefer to brush out the structure (nylon polishing or horsehair) and then lightly rub on and polish the fluorocarbon of the day (JetStream for example) over the applied structure to “finish it”, but this is not absolutely necessary.

Sometimes we end up using a harder or “colder” glide wax than one would think. This is probably because relative to the temperature, the snow contains less moisture and/or is finer than one would have expected. Also, this is often the case in one lap or point to point skating races where the snow isn’t going to become very skied in. In this situation, the colder structure should also be used. Generally, it never happens that a coarse structure with a cold wax or a very fine (cold snow) structure with a wax for warm conditions works better than having them matched up and appropriate for the conditions. That’s just not how snow is. Bizarrely, on occasion it might be not too bad, but it won’t be as good as having the correct wax and structure.

I recommend starting with a “cold” or “cold universal” stonegrind and then managing the skis by using hand structure. Should a ski have a lot of structure on it, even too much for the conditions of the day, it doesn’t do much good to apply a “colder” structure over it. For this reason, it is best to have a fine structure on the skis and add structure as needed.