Jessica is a grad student at the University of Rochester in New York studying biophysics and nanotechnology. She currently skis for Alpina/Peltonen. This article first appeared on her blog, LunaSki.

I've had a bunch of science related articles floating around in my head, and I just haven't had the time to get around to them.  Here's a stab at one of the things I've been thinking about lately.

As part of my Peltonen sponsorship, I received my first pair of hairies - technically called Zeta bases.  For those not in the know, hairies are a type of waxless classic skis that have little rough "hairs" in the kick zone.  I had the chance to mess around with them earlier this season, and found that they give pretty reliable kick in 0C/new snow conditions.

So how do hairies work?  Old school waxless skis, like the old pair of back country Rossi's I used when I was a kid, often have fishscales on the bottoms of the skis.  The way these skis work is fairly obvious; the fishscales dig into the snow and enable a mechanical push against the snow.  It would seem that the hairs on the hairies are too fine to function in the same way and enable a simple mechanical kick.  It's quite possible that I could be wrong here, but I'd like to present another idea on how hairies work.  Please pardon the following deviation, but I promise this will all come together in some sort of reasonable argument. 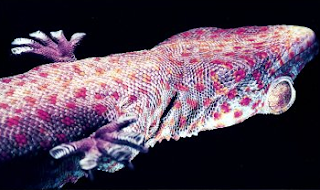 Geckos are really amazing little animals.  They walk up walls without any problem, and if you were to feel their feet you'd realize they aren't ridiculously sticky (yup no klister on their feet).  They are much heavier than ants and other insects that we are accustomed to seeing walk up walls and ceilings.  So what trick to geckos have up their sleeves... errr.. feet?

On the nanoscale, a geckos foot is made up of billions of tiny fibers that are fanned out in a fractal like pattern.  Each fiber enables close contact to the atoms of the surface the gecko is trying to stick to.  This enables an induced electrostatic attraction between the gecko hairs and the surface due to the Van der Waals force.  Van der Waals attractions are usually very weak, but multiply that by the billions of hairs, and you get a pretty substantial force.

So do hairies work in the same fashion?  I'm not entirely sure, but it seems like a good possibility.  The hairs on hairies are definitely not nanohairs (they're probably microhairs), but just imagine if you could make nanohairy classic skis - anyone feel like skiing on the ceiling?