Cornering and downhilling make the difference

During the qualifying rounds of the sprints at US Senior Nationals, I was on the high speed hairpin turn at the bottom of the course. Normally, I'd be on the final climb, but I thought it would make for some neat pictures (which it did ) and I was curious how people were going to ski it. I was surprised. Out of the approximately 400 skiers who competed today, there were not many who took the corner well (15?). The best skiers came into the corner with speed, took a proper line (slightly wide entry, cutting the inside in the meat of the turn, and then an exit with speed which was wide if necessary), and skied the turn in a quiet manner maintaining momentum and with patience.

The most common mistake was in being impatient which I guess could also be called trying too hard. Skiers came into the turn with speed and then even before they were 1/3 of the way through it, they stood up and tried to skate through it using their poles, preloading even. This was a pretty high speed corner and everybody should have had enough momentum to tuck through it easily. Standing up only slows you down. Standing up and then preloading in order to increase poling power slows you down and wastes energy.

The snow in the best line was soft and deep. In probably 1/2 of the photos that I took, the snow was kicked up or over a skiers boots. In the fastest skiers (see above), you couldn't even tell that the snow was loose because they rode on top of it. The poling with preloading is a major mistake because first obviously you catch air which slows you down and you waste energy, but you also slow down when jumping up and down because the skis sink into the snow which really slows you down. Then you really do need your poles...

One thing that I recommend for young skiers is to ski in a group (4) and on distance skis, race all of the downhills shoulder to shoulder or head to head. Really race them. You're not going to turn an easy day into a hard day, but you'll learn to ski downhills clean, efficiently, and fast. If you screw up, you get immediate feedback. You also learn about drafting, slingshotting, and generating speed with your legs while in a tuck. What I saw today made me realize that we as a country need to really ski the downhills in training and head to head.

You might say, yeah, but races are not won on a downhill. I say that this is free speed - free time taken off (free in that it doesn't cost you energy). Why not take advantage of it? Skiing is also more fun when you can rock the downhills. Most importantly though, skiing has become more head to head racing and in situations like these you need to be able to pass and maneuver comfortably at high speeds. This is important training.

Karin Camenisch for example (see photos below) today went out comfortably and then went to the front on the downhill in each heat which gave her a significant advantage as she lead into the final climb each time. I don't think that at the bottom of the downhill she had worked harder than anyone else, she just was better at it. This was also the same with Caitlin Compton.

If you enter the downhill in last, you'll need to ski the final uphill 4-5 seconds faster than the others in order to come in first or second (and you'll need to pass them while doing it which often times is difficult and wastes energy). Assuming that this is the case with qualifying and in the heats, you're out of it before it even begins. 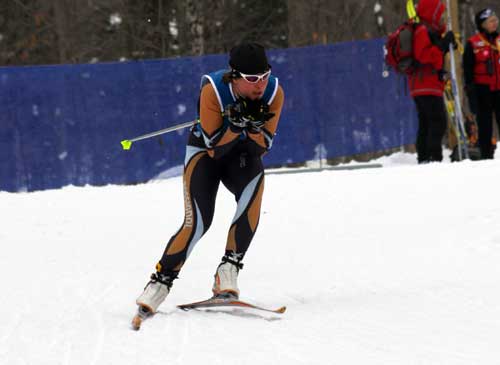 Karin Camenisch skates through the downhill corner in a tuck 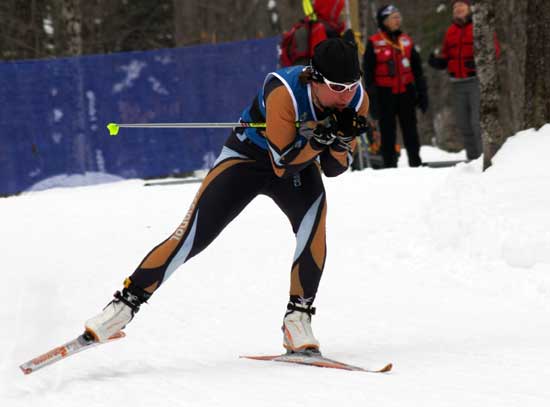 Still in a tuck, not losing speed