Rarely does one picture say so much: V2

Here are two photos from the uphill roller ski race at Lake Placid in which Kris Freeman finished second by several minutes to a biathlete with super fast roller skis.  The first photo is of a skier somewhat off the lead at the start of the race.  His position reminds all of use that have taken any of the Sten and Jen roller ski clinics of the newer theories and body positions relative to weight shift and foot position. 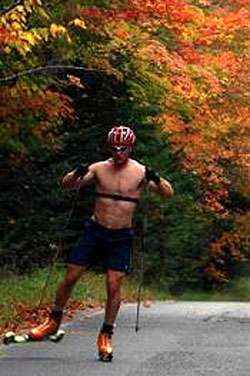 Does this like exactly like Sten or what? Here is an elite national class racer doing the V2 on an uphill. He has completely shifted his weight onto his left gliding ski, yet his right foot is still hanging out to the side.  Old technique would dictate that the skier bring the right foot back next to the gliding foot before the next push off.  New technique, says why waste the time and effort to do that.  Just shift your weight and leave the hang foot out where it needs to be for the next transfer of weight. This allows for faster turnover.

Also note that the skier has pushed off onto the gliding ski and the push off foot is pretty close to the gliding foot. There is no twisting of the body because the skier spent too much time pushing off behind his gliding ski. There is not late kick to this skating skier.  Dorsi-flexion, another Sten & Jen hallmark - The skiers right ankle is flexed, there is no delayed pointed toe from a long slow push off.  The push off was clean, crisp and snappy.

On another note, his arms are high, elbows at approx. 90 degrees and his body position is high. He is gliding comfortably and already preloaded for the next push. He still has ankle bend and although it is hard to tell from the darkness of the photo, I think his is doing the "Dirty Johnson " - forward hip position that Mike Muha covered previously.  All things said, it is a pretty good image to imprint for good technique.

This is the V2 and many of us don't think we need to use this technique. Many of us won't use it during a race.  Practice it anyway on roller skis. It is the easiest technique to learn weight shift and how to balance on a gliding ski.  If you can't do it here you won't be doing it in either V1 or V2 Alternate.  If you can do a good V2 then your other techniques will be better also.