Generate Power from the Weak Side doing V2 Alternate

V2-Alternate, also called the two-skate, is essentially doing a doublepole on every second skate push. Done right, the leg push is equal on both sides. But are you doing it right?

Many skiers skate powerfully off the strong side but simply step off the ski on the weak, recovery side. If you learn to generate power off the weak side, you'll be able to V2 Alternate up terrain you never thought possible before.

At a recent NordicSkiRacer.com racing clinic, Northern Michigan University's head cross country ski coach Sten Fjeldheim demonstrated proper technique for the weak side of V2 Alternate. I was able to get some video and pictures.

Here's the video. Photos are below, as well as copies of the video you can download.

At the end of the power phase of V2 Alternate, you will be on top of a free-gliding ski with you hands behind you. Typically, your knee will be bent. If you want to generate NO power, simply stand up on that leg as you swing your poles forward. Funny, but skis only generate forward momentum when there's downward pressure placed on them. Opening the knee -what happens when you stand up - releases the pressure on the ski. They still glide, but a ski in free glide is a ski that's slowing down.

Typical skier: As they skate off the weak side in V2-Alternate, their bent knee simply opens (straightens).
The knee moves away from the ski and power is lost.

To maintain pressure on your ski, you need to drive your knee down and over before you skate off it. This is done on both sides of the V2 Alternate. Keep the lower leg angled forward at the ankle (dorsal flexed). Press your knee down toward your ski tip, then hold the angle and drive the knee toward the other leg. At the last possible moment, you push off the weak ski and onto what becomes the strong-side ski.

Don't lose power: Drive your knee DOWN, then OVER, then OFF.
Maintain pressure on the ski and generate power.
(By the way, this is true for the strong side of V2-Alternate as well!)

You can generate even more power on the weak side by using the forward arm motion to increase downward pressure on the weak ski. As the hands come forward, use the momentum to push your knee down and over to the strong side. 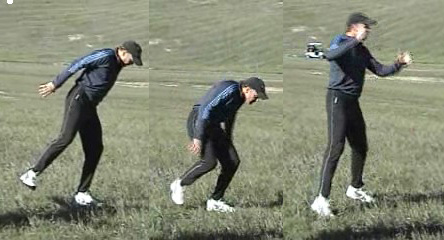 As your hands come forward on the weak side,
Sink DOWN, OVER, and UP.
Use you hands and arms to generate additional power.