Getting Started with the Double Push on Cross Country Skis

"Double-push" leg stroking means that each leg pushes first toward the inside (toward the other leg), and then toward the outside (the usual main skate-push). I like to think that each foot is tracing its own "V" with these two different pushes, so my two legs are doing V + V = W.

I got the double push working on snow. This video is of my first time trying it on snow, and I was mainly trying to avoid tripping over the poles with the long skis. The poling could use lots of improvement. I've also tried this on rollerskis: See a video of me with and without ski poles.

My approach to making two pushes with the same leg is to make a hop with my foot up in between those two pushes, and switch the aim of the ski while it's (partly?) up in the air. The hop adds some power of its own, but that's not it's main purpose for W-skate. (On inline skates it's usually not hard to switch the aim by "steering" or pivoting the skate while it stays on the ground - which is a very effective technique to maintain higher speed in many situations. 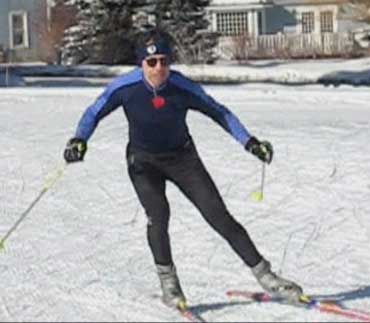 The right ski is on the outside edge pushing toward the left ski. It takes a "hop" to get it pointed back on the inside edge, angling to the right.

I'm sure other skiers have done W-skate on snow before. When analyzing the video of the 2006 Olympic Men's Individual Sprint Finals, I saw Bjorn Lind doing a "half W" in the later part of the start zone (on his way to winning the Gold medal). Or at least if he wasn't doing a true "W" then, it was obvious that he's fully capable of doing the W-skate any time he chooses. (The Gold medal performance of 10,000-meter ice speed skating event in the 2006 Olympics included some double-push stroking on ice on the straight-aways in the later laps -Torino was a good place for the showing the extension of double-push beyond inline skating.)

But my suspicion is that the key disadvantage of the "hopped" W-skate versus V2 skate is not inefficiency, but something else, or some combination of other things, like (a) it's hard to use significant muscle mass to add more propulsive work while both feet are up in the air, so it inserts a low-power phase in the stroke-cycle; or (b) high peak force required for hopping puts a special "plyometric" stress on some muscles; or (c) aerodynamic drag of higher extended upper body position at higher speeds of a finishing sprint.

And I doubt there's one simple reason, efficiency or otherwise, to explain why Bjorn Lind might have used "half W" instead of "full W" in the 2006 Olympics. It's just disciplined experimentation and careful measuring.

What's this W-skate good for? suspect its advantage (if any) is mainly for acceleration. In situations where I do want acceleration or speed, here's some things I'd consider working on:

The last point is based on the theory that the major benefit of the inward push is to increase sideways weight-shift energy, more than the direct push into the snow. Actually I was surprised that aiming the inward-push ski toward the other side actually worked so easily on snow.

For me, it's just another interesting move to play with on rollerskis and snow. I guess the "half W" might be good for acceleration -- not sure if full W-skate has any advantage for either acceleration or maintaining high speed in any situation on snow. But on wide smooth asphalt with inline skates and rollerski poles, I'm finding double-push legs combined with V2 poling is awesomely fun and fast - and the spectators like it too.