It was unusual. You wouldn't think so, but we really haven't had cold weather this winter. I remember a winter where the day-time high never got above 10F for a month! This winter has been right around freezing, plus or minus 5 degrees, at least down in southeast Michigan. Warm.

So as we drove north through Grayling on our way to the Michael Seaman Memorial Classic Race at Forbush Corner, -4F seemed cold. By the time we arrived, the temperature had risen to a balmy 0F - and then the sun peaked out in all it's glory!

How do I dress for the cold? I don't remember! I layered up and figured my warm-up and wax testing would let me know if I was under or overdressed.

Registration for the race was pre-registration online only. EXPECT THIS TO BE A TREND, POST COVID-19! From a race director's perspective it is so much easier to prepare the day or evening before the race than at the last moment, morning of.

Skiers social distanced with masks as they entered one side of a yurt, picked up their bib, and exited the other side.

I hadn't used cold wax all year - either kick or glide - so it was a novelty to look through my waxes. I waxed a couple pairs of skis, one with Toko High Performance, the other with Toko High Performance mixed with X-Cold powder. The X-Cold is a hardener, and I figured Forbush's heavy equipment would pack the trail with hard classic tracks, and the X-Cold might give me an edge. Into the woods I went to do glide testing, and the skis with X-Cold did seem faster.

I mostly followed Nick Biac's Toko recommendation for kick wax: iron in Base Green, cool, then three layers of Toko Blue. The first two layers covered my entire kick zone. The last layer was shorter and more underfoot. Nick suggested a cover of X-Cold Grip Wax. Oh what to do? Supposedly, temperatures were going to rise rapidly during the race. Would I want that colder wax on top of the Blue? And my skis didn't feel draggy without the cover. I left the X-Cold Grip Wax in the wax box.

One thing I like about Toko Blue kick wax is the range: from -22F up to +19F. I figured no matter how fast the air temperature warmed, the snow temperature would lag and I'd have good kick for the entire 13k. And I was right. The temperature warmed up to the low 20's during the race but I had great kick the entire time. I did hear from other skiers who used a narrower cold wax and lost their kick partway through the race. Nothing is slower than classic skis without much kick...

Forbush Corner used wave starts with a few minutes between waves. I almost missed my wave when I decided I needed some Dermatone on my face. It took me awhile to dig through my car, finally finding the last bit lurking in the bottom of a bag. I think it was 20 years old! But it made my face comfy for the race.

Teammate Mark LaMoreaux offered up his spot on the start line (thanks Mark!) and a minute later we were off!

The were 13k senior and 7.5k junior distances. The Juniors skied from the start near the entrance to the Pancake trail out to the west trail system and skied one loop BACKWARDS around the Back 40 trail before heading back to the start/finish.

Seniors started in the same place, but did two BACKWARDS loops around the Back 40, the skied one loop BACKWARDS around the Green Trail before heading to the finish. 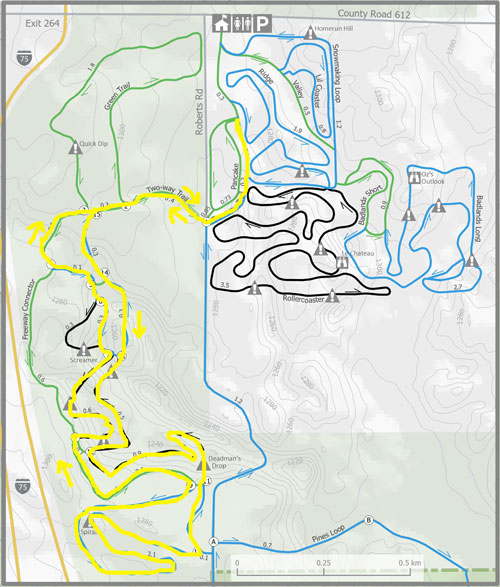 I would guess that the vast majority of skiers, have never skied backwards on the Back 40 so it was like racing on a new course! We went up Deadman's drop rather than down. We skied down Interval Hill instead of up (my favorite - zoom!). There were still some wicked corners at the bottom of a couple hills. 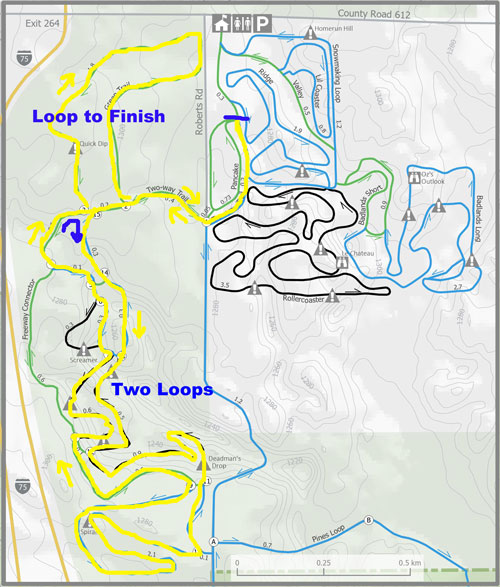 There were fast senior women out for the race. The usual suspects took the top three spots with Rebecca Davis in first in 52:59.5 followed by Mariah Frye Colie in 53:05.7, and Wendy Anderson in 53:46.6.

A small number the senior skiers doublepoled the entire course. Or, to be more correct, they doublepoled what they could and herringboned the steep uphills.

Me? I beat Doug Cornell. I was happy. But Steve Seager passed on the way to the finish and I couldn't catch him.  I'll be watching for you at the next race Steve!