We couldn't have asked for better weather. Although it was below freezing, the bright sun and no wind made it feel much warmer. (We'll discount the comment of a biker who claimed "I had to fight a headwind the entire way around!" You know bikers...).

The site of the NordicSkiRacer 10km Rollerski Invitational was Kensington Metropark in Milford, MI. The 8.5 mile paved loop around Kent Lake is a great rollerski loop: Lots of hills, pretty, with pavement that ranges from brand new to "time to replace". But there are two wooden bridges that become very slick when wet and skating rinks with frost. The gaps between boards have devoured many a pole over the years from non-attentive rollerskiers. The time trial route purposely excluded the section of trail with the two bridges to maintain a safe racing environment. The route was also chosen to climb the steepest hill on the trail rather than to descend it. 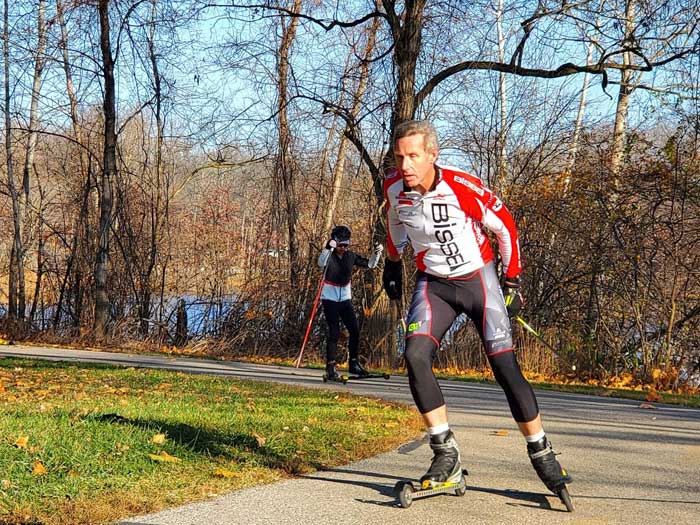 Steve Smigiel Jr and Jolene Ng rollerskiing to the finish

Most of the skiers were from Team NordicSkiRacer, but the Smigiel's from the Grand Rapids Nordic Ski Team drove across the state to test themselves against NordicSkiRacer's finest.

Skiers were divided into three groups based on estimated finish time. The slowest group went first, the fast last, and all the skiers ended up at the finish line only a few minutes apart. Hammer Gels awaited anyone who needed a little pick-me-up. 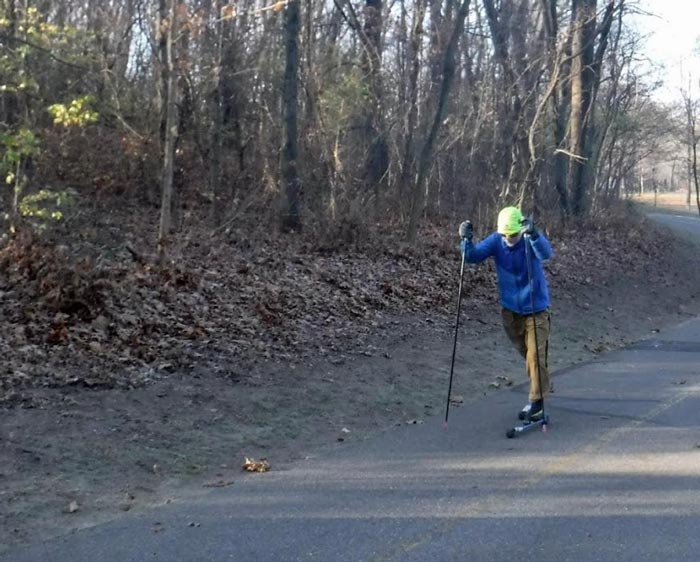 Steve Smigiel Jr, had the fastest time of the day, finishing in 30:30. Steve has been rollersking all pre-season dragging a tire and this was his first time skiing without the tire - guess he did OK. Ricardo Lung and Kevin Vazquez were just behind in 30:54 and 31:38. It should be noted that both Lung and Vazquez are big "drag the tire" proponents as well. Jolene Ng, a relatively new skier, was the only woman racer, finishing in 45:10. Zbigy Zlobicki was the only classic skier, finishing in 39:24 - everyone one else skated.

There are lots of photos from this little adventure: go to
https://photos.nordicskiracer.com/Rollerski/2020-11-14-NordicSkiRacer-10km-Time-Trial

Note that everyone had different rollerskis, some with fast wheels, some with medium wheels, so finish times may not be directly comparable. And there is no truth to the rumor that some rollerskiers used pure fluoro on their wheels... 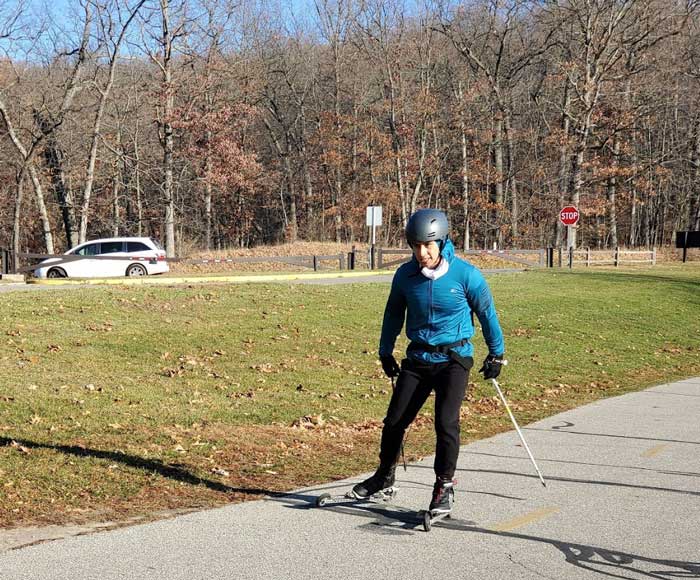 Kevin Vazquez 2 miles from the finish

If you were attentive, you'd be wondering, "What happened next? 10km is a little more than 6 miles and the loop is 8.5 miles. How'd everyone get back to their cars?" Everyone rollerskied that last 2.5 miles, across the two wooden bridges, back to their vehicles. Since they weren't racing, they could take their time and be cautious over the bridges.