The journey to Vasaloppet 2020

The journey to Vasaloppet in Sweden takes some consideration. Registration opens 8 months ahead and is full in a matter of hours. I was up dutifully at 4 am and managed to successfully register. Next was housing, it took several tries with Airbnb, but we had a small cabin to stay in on a farm north of Mora.

Only a matter of getting the training time in to be ready for 90 km of flat classic skiing. 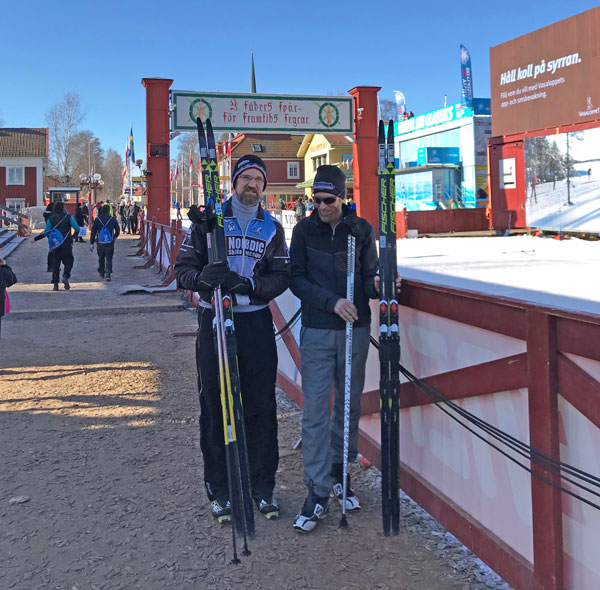 The Vasaloppet is a big deal in a land that treasures skiing. 15,000 ski the main event, and during the week prior there are several other races, so 56,000 people are entered in races throughout the week. The race traces the route of Gustav Eriksson, who was escaping the Danish king’s troops, on his way to allies in a river valley 90km away. He was successful, then led a revolt which resulted in him becoming king. King Vasa. The race has commemorated this feat for almost 100 years.

So as the season went along, training took shape, and we watched the weather in Mora, Sweden. There was little snow, and it melted. Early races were held on man-made snow, with reassurances that they could support having the whole course covered with snow. 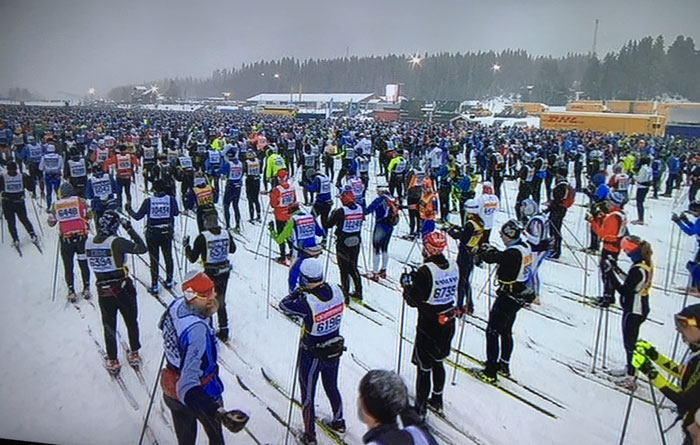 Michigan Tech alumni Craig Hughes and I travelled to Sweden, spent a couple days in Stockholm, then the 4-hour drive to Mora. The town was in festival mode, with the central street taken over by the course and finish area. Not a snowflake in sight. We headed for the registration tent, got our bibs and did some shopping in the expo area, quite a show. Off to our cabin, where we met our hosts. He was a crane operator turned diver, who had a ski waxing form set up for us in the shop, and she is a mindfulness expert. The cabin was cozy and large enough for our group of five. 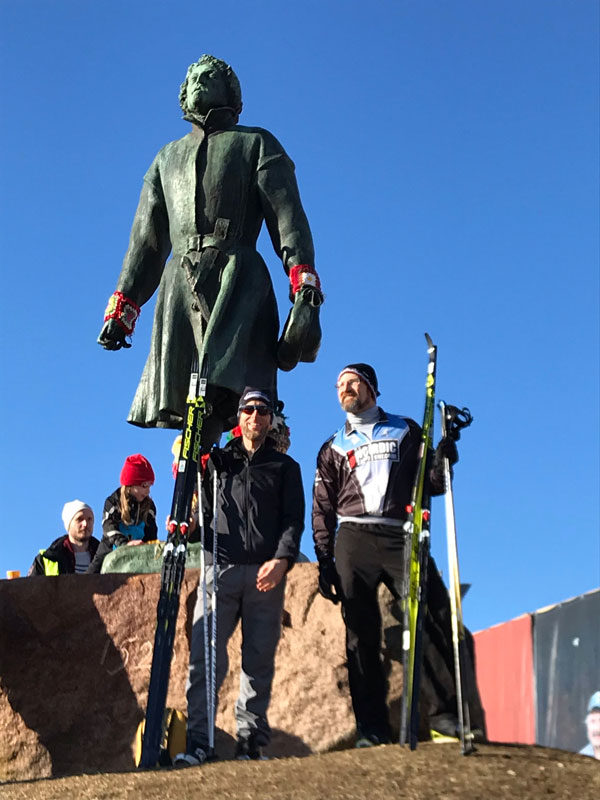 We spent two days checking out the start area, seeing the course and some of the races in the works, and skiing the last 10 km to the finish, having to walk around the kids’ race. The tracks were hard and fast. Sounded like 90 km would not be too bad. The only trick is the first hill. 15,000 skiers go at one time and there is about 1 km of flat, then a road crossing and onto a 3km long hill. It gets somewhat congested, with waves from 3 on back to 10 having to wait, sometimes as long as an hour. We thought about testing wax, but the forecast was for snow. We kick and glide waxed our skis the prior afternoon, and hoped everything worked as planned.

We were up at 3 am, ate, packed up and headed for Mora. We thought we were early, but the buses were already heading out. If you can imagine buses to handle over 10,000 skiers! We found our bus and settled in for a two hour journey through the falling snow. When we arrived at the start, we could see again that we were not early. We got off the bus, grabbed our ski bag and got into line for our wave 3 corral. We would not be in first part of the wave. The snow was coming down with about 2 inches on the ground, covering the ice underneath. As we waited, we looked around and marveled, yes marveled at all of the people. Then we saw Jay Woodbeck, Sam Holmes, Tom Kendrick and Dave Joda walk by, after having quickly dropped their skis in the wave 2 corral. So now there were at least six ex-Tech skiers ready to do the Vasa.

Finally we got our chips read and we entered the wave corral, placed our skis and poles, and headed back out. A wait at the porta johns, got our final pieces of clothing on, then waited in line to go into the warming tent. All of our skiing friends were there, packed in pretty tightly. We pretty much just got into line, squeezed in, chatted with a fellow in our wave a few minutes and then started the slow walk back out. Time was running out. Off to the baggage truck, waited there, we would not make our start time. At last someone says to leave your bags on the ground and go. At least we assumed that was what was said, we don’t understand Swedish. We jogged to the corral, dug our skis out of the inch or so of snow on them, and put our warm ups in the small bag we had. Ditched those in the bin, to end up at the finish, and put on the skis. The music was going, the sun was just up, and the snow starting to diminish. A check of the watch. It is 8:00, I wonder when.. oops, there go the banners, we have started. The music kept going, no announcement. We were off and racing. 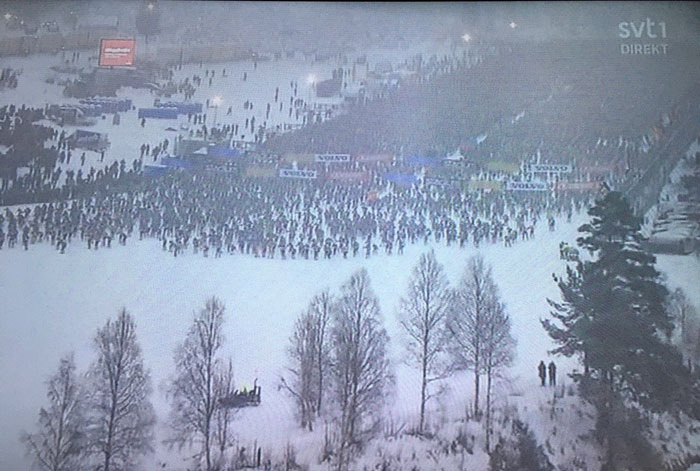 So double pole, some people are working hard to pass everyone before the hill. It is chaotic. I manage a few collisions, and try to stay towards the outside as we head up and over the road and into the tight pack. Skis cover every inch of snow, as we walk our way towards the bottom of the hill. It is only a few minutes, but kind of dicey, with ski tips at your ankles, the person in front of you only a few inches away. Then we are skiing again, just going up the hill, trying to keep some kick as we mostly plod along. I get stuck behind a few people double poling, and numerous people pass by, there is almost no way to change lanes. Finally things start to clear out a little, but the fresh snow has created a big problem. When the pros took off, they sent a snowmobile out ahead of them. It has track mold boards attached to the skis and a sled that has two sets of actual skis on it to do the forerunning. So the pros have relatively fresh tracks. But there are only two sets of tracks that are skied in. The other 4 sets of tracks have between two to four inches of snow in them. So we ski along, the pack making its way along, with not much opportunity for passing. I try the other tracks a few times, but it doesn’t work out well. So I bide my time. 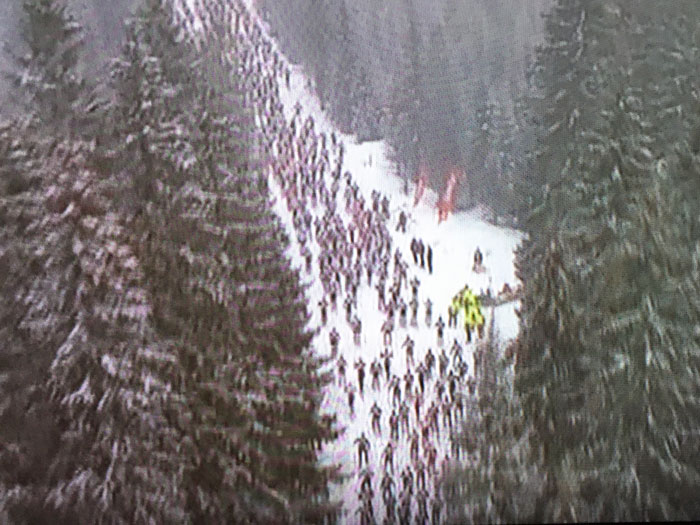 The aid stations are well run, they have lots of volunteers, drinks, blueberry soup, rolls, etc. They even announce your name and country as you arrive. Nice touch. I almost catch Craig on the way out of the first one, but can’t quite keep in touch in the traffic. The kilometers go by, we have reached 40 km, only a 50 km to do now. Most of the course is pretty flat, the hills can be handled pretty quickly. The new problem is that the tracks are getting washed out. Not only is the skiing in the tracks kind of slow, but now additional effort is needed to keep the skis going straight. The downhills are not very restful either, you need to keep on your toes to keep from getting caught by a rough spot in the trail. I start to cramp a little, and then I put my ski down a little too close to the center, and it slips to the side. I go down and my abs and leg cramp. Even at 50 km, there are a lot of people around, I manage to get to the side, have a gel and some water as 100 people go by. After 45 seconds I get going again. 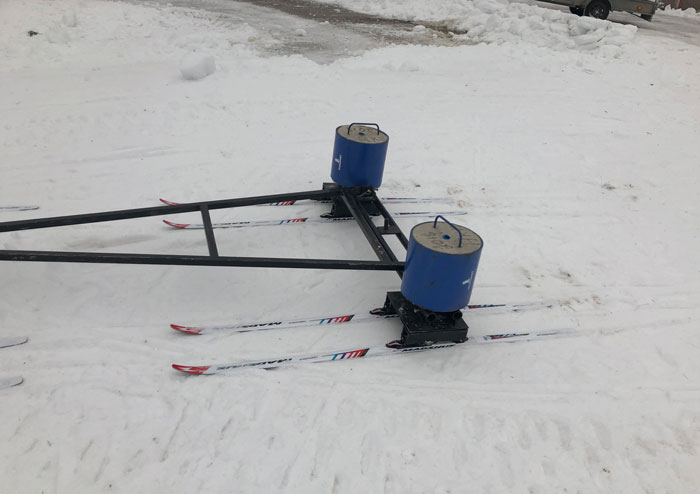 At one point, I hear the sound of an engine. As the groomer passes us, we get into the fresh tracks. They are better, but still pretty soft. They don’t last very long, as we get to the next aid station 1 km later. No more groomed tracks. As we start to get closer to the finish, the course starts to firm up, as we have gotten to the regular ski areas, and where they have been able to regroom after the snow stopped. My plan is to be able to use the saved energy I have to push hard through the last 10 km. I last about 2 km, then I start to think that I don’t need to worry about passing people. As the course gets into town, we can see the people around the course, and some of the skiers that have already finished heading for their bags. Turn the corner, into the campground, only 1 km left. I try to go quickly over the little bridge, but someone jumps in front of me, so I have to hold back. Then we are on the street, make the left turn, and 200 meters along the central street with people lining the walls. Double pole along, don’t let anyone by now, and there is the big screen and the finish banner. Coast to a stop before running out of snow. What was supposed to be a 5 and half hour ski turned into 7 hours.

It is relatively quiet around the finish. I find Craig, he finished 8 minutes up, we hand off our skis to our crew and we hop the bus over to the soccer field to get our bags. We get our warm ups on and decide to skip the showers and food in the gym building and head for home. 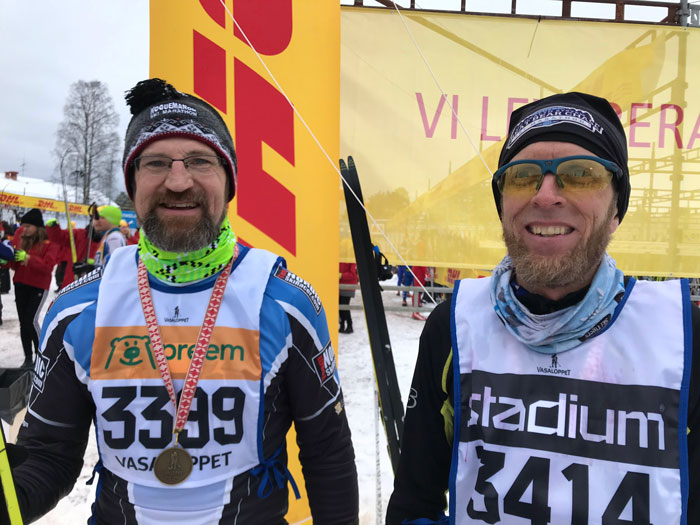 I found a video from 2019, this guy Robin, had a wave 1 bib, started at the very back, taking video in one hand, and stopping to talk to people. By the end he had passed about 8,000 people. It gives a pretty good look at what 2020s race was like. https://www.youtube.com/watch?v=-yS5iqVWv7Q 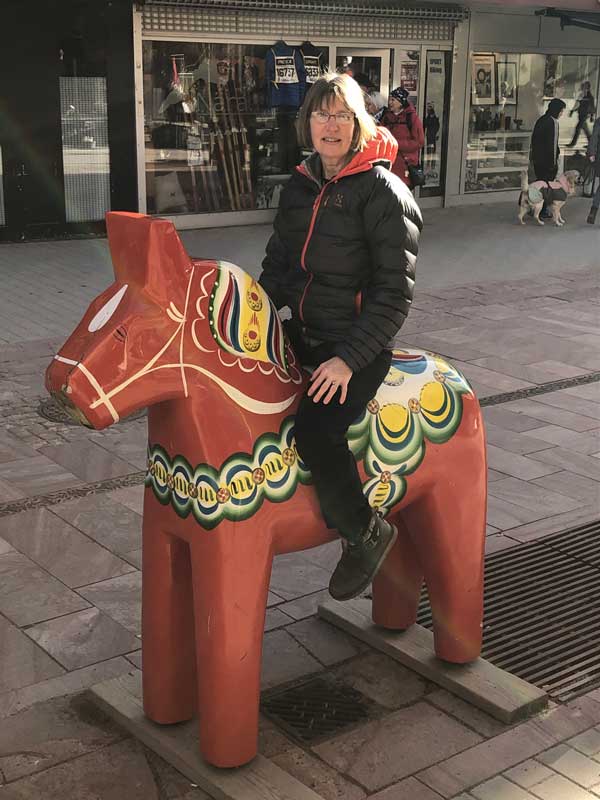