No doubt, this was the most epic Frosty Freestyle ever...and there have historically been some doozies! Once again, the wonders of man-made snow allowed for holding the Frosty Freestyle for 11 consecutive years. In fact, only two of those years were on natural snow!

The course was the mile-long loop in the woods - the trail did not extend to the cross country ski center. Skiers had to walk across a wind-blown field to the trail, dodging an occasional rain-water lake.

With Friday in the 50's and an inch of rain overnight, the trail was in good condition at 5:00am Saturday morning. By 8:30am, conditions had deteriorated: still full snow coverage, but the start of some puddles. It rained the entire morning, with another inch or two falling.

We were actually: we expected the rain to mostly soak into the porous ground, but the ground saturated by the time the races began. The course never went down to the ground - there was always a base under the snow, slush, and water.

The kids race went off at 9:00 sharp. Temperatures were still warm. Kids where escorted as a group to the course just before the start time, and given 30 minutes to race. Most kids did 1 lap; at least one did two. All the kids who had attended the Team NordicSkiRacer / Brighton Area Recreation Connection Learn to Cross County Ski classes were entered into the race, but only a small portion of the class showed up because of the rain. We will be holding a make-up race for the entire class when Buck's Run is back to it's full glory again.

The kids actually had fun! Tracks were in good shape, if a little wet, and conditions were fast enough the kids could glide down gentle grades. Frosty the Snowman skied anchor. Listen to one racer:

The 5km race took off at 10:00, with temperatures cooling to the 30's. The trail was getting wetter, but a firm base underneath remained. Over the 5 laps, as skis pressed down on the saturated snow, the snow would compact and water released...and puddles began to develop.

Birgit Sorgenfrei and Daniele Castiglioni were the top women and man, finishing 26:24 and 18:54. Jolene Ng and Linda McGiness finished 2nd and 3rd for the women in 30:43 and 35:49. It was Ng's first-ever cross country ski race: what a way to start your racing career! Steve Lamarra was second overall for the men in 30:19.

The start of the long event was moved up by 45 minutes so skiers could get on the course before it degraded more. The course really got wet during the 10km! The more laps that were done, the more water was pressed from the snow (and the more that came down from the heavens). Trail section with good drainage had good skating conditions. Depressions, however, became filled with up the 3 inches of water. The key was getting through those wet spots. Slosh straight through and risk catching a tip in the water? Doublepole along the edge and risk running over dirt or a stick? Which side was better? On the last laps, there was no getting around getting splashed on the leg as your ski planed over the water in certain sections of the course.

The key to racing in the rain is to wear extra clothes! Many skiers ware warm-up pants and jackets to keep the cold rain off. You'd think you'd overheat, but that's not the case. The extra layers reflected enough body heat to counteract the cooling effect of the rain. (Personally, racing in the rain is more fun than racing in a blizzard at zero degrees...)

The 15km promoted-distance was reduced to 10km: 6 laps around the course. Since I historically have trouble counting laps, I programmed the display on my heart rate monitor to only show the lap I was one. It worked! I did not ski an extra lap! 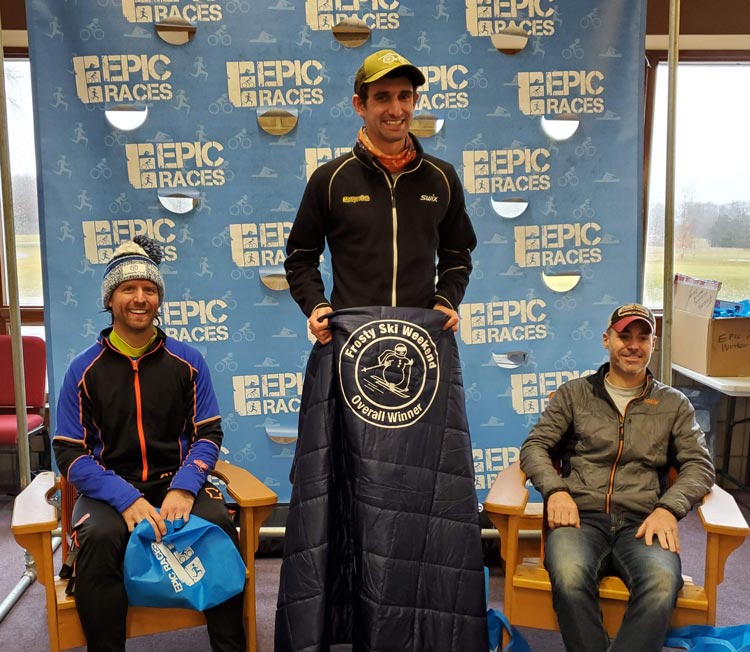 Jordyn Ross (Grand Rapids Nordic Ski Team) and Erin Lipp (Team NordicSkiRacer) fought each other for the first 5 laps, then Jordyn pulled ahead on the last lap to finish first in 36:09, with Lipp just behind in 36:38. Former Frosty champion Cheryl Darnton (Cross Country Ski Headquarters) took third in 41:19. 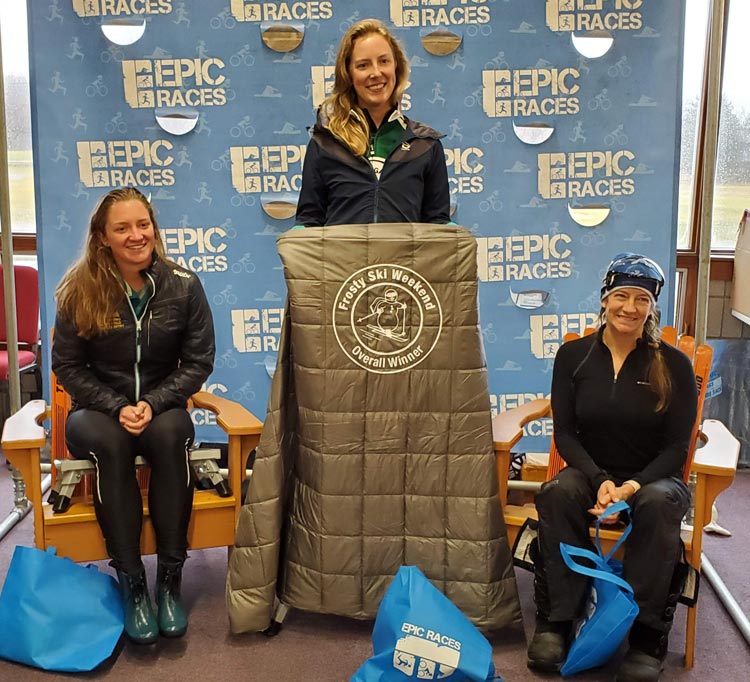 "It was wet, it was wild, and it was just an event. It was epic. It was a little slow out there. There was three inches of standing water in a lot of places. It kind of slowed down the race but we finished. It was good. It was amazing we held it."

"I did the Frosty Freestyle yesterday and have to take this opportunity to thank the team that puts on this Michigan Cup and local event. Though weather did not cooperate, the race happened despite 2 inches of rain and 50 degrees in the morning. The whole area was flakeless but the trail was still skiable and not scary. I am still drying boots but this is an incredible trail for our racers living and working in the southern areas. Trail needs more snow to recover however."

Racers can from as far as upper Michigan, Indiana, and Ohio.