Pity those racers with soft skis or poor balance at Saturday's Lakes of the North Freestyle! There was plenty of snow, and the trail was groomed so three skiers could skate side-by-side much of the 7.2km trail, but the snow surface surface was hard, slick and undulating, and frozen groomer marks sometimes caught the edge of your ski with unintended consequences. A couple of broken poles and a single ski that went flying off the trail made for an exhilarating race!

There was a very slight indentation for a classic track for part of the race, but the snow was too hard to set a good track with the equipment Lakes of the North has for grooming.

Vanias pretty much led from the start, finishing in 16:46. VASA's Sam Holmes took second in 17:53 after a long battle with third place finisher Jay Woodbeck (Team NordicSkiRacer), who finished a few seconds behind in 18:00. 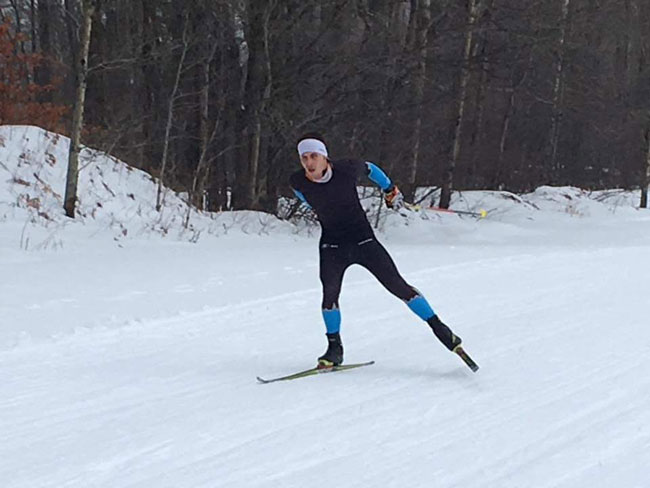 Alex Vanais coming in for the victory!

Senior men started the race at 11:00am. Senior women started 5 minutes later, and all the juniors started 5 minutes after the women. The start area was wide, but quickly narrowed less than a hundred yards into the race. Excited racers caused a couple early race crashes.

The most interesting involved John Hubbard (Cross Country Ski Headquarters). He fell within the first half kilometer, quickly got up, skied a little further when suddenly his right ski  rocketed across and off the trail to the left! Fortunately no one was to his right, but a few of us just behind him were amazed to be able to witness this unique experience! (We believe John's Turnamic binding partially released during his first fall...)

I was not without my own excitement. I'd chosen my stiffest pair of skate skis and was comfortable and confident over the trail the entire race...until I made the mistake of sticking my right pole between my legs. WHAM! I was down in an instant, rolling out of the way to avoid impalement by Robin Luce (Hanson Hills / Cross Country Ski Shop). A little over 2km from the finish, I quickly lost about 8-9 places, but as I got my act together, I was still able to V1 and Alternate-V2 well enough that I passes 2-3 skiers back and held off attackers from behind!

Lunch was awesome, and skier enjoyed tales of doublepoling because it was too slick to skate, falls, almost falls, the mistake of picking skis that were fast instead of stable - all the good conversations that make the Michigan Cup community fun! 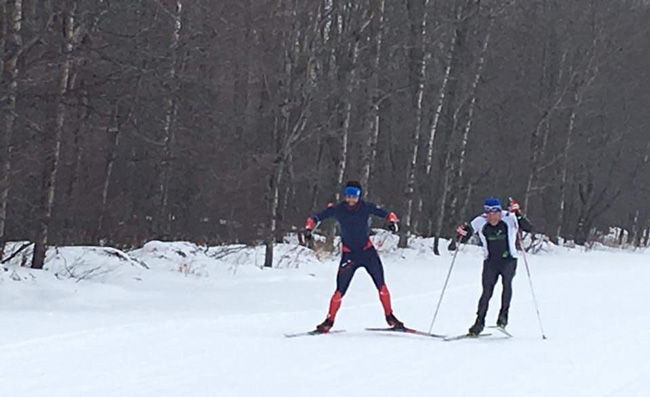 Kevin Tarris getting the edge on Milan Baic at the finish.