You couldn't have asked for nicer conditions at the Mike Seaman Memorial 10k Classic. Originally scheduled for the Treetops Resort in Gaylord, personal changes there caused the event to be relocated to Forbush Corner in Frederick at the last moment (thanks Forbush!). The advance weather forecast called for rain and mid-to-upper thirties, but the rain was postponed and the race was held in warmish, slightly foggy conditions, fast but controllable conditions. 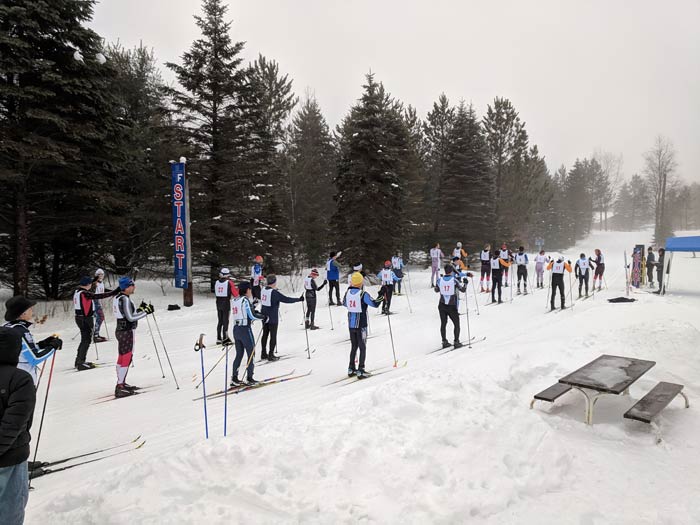 Lining up at the start

The race was an interval start, with four racers starting in waves every 30 seconds. The course was actually closer to 8km, starting with Green Trail out to the Back Forty and back on the Green Tail. Not that anyone complained about the distance, given most of the racers were recovering from the previous day's White Pine Stampede!

I think the consensus was Yes and everyone had their own solution to damp to wet barely transformed snow in warm conditions.

In case you were wondering I tried Fischer Zeros, Rex OI klister, and Rex OI covered in Rex Hydrex. Zeros - great kick and glide. Klister - pretty good kick, OK glide, minor icing. Same klister covered in Hydrex - great kick and glide, no icing. I decided to use my Zeros because I thought conditions might be more variable out on the course, and I thought they'd handle it better. I also used the Hydrex on top of my Zero hairies - it greatly minimized drag.

For the men, Denny Paull (Grand Rapids Nordic Ski Team) held on to the win by 1 second over Allen Sorgenfrei (Team NordicSkiRacer), 28:44 to 28:45. Mike Davis (Hanson Hills/ Cross Country Ski Shop) was just a little behind in 29:14.