Revenge is sweet! After losing to Hanson Hills / Cross Country Ski Shop's Alex Vanis in Saturday's Frosty Freestyle, University of Michigan Nordic's Lars Hallstrom took the Krazy Klassic by storm, finishing first in the 12km distance and taking the overall weekend win with the lowest accumulated time a across the two races. Hallstrom won the Krazy Klassic in 30:56. Vanias was second in 31:59, with Team NordicSkiRacer's Kyle Hanson third in 32:32.

Jordyn Ross (Grand Rapids Nordic Ski Team) dominated both days, winning both the Frosty Freestyle 12km and the Krazy Klassic 12km. Her time in the classic race was 41:08. University of Michigan's Ingrid Lindquist was second in 45:07, with teammate Elizabeth Callison third in 47:00. 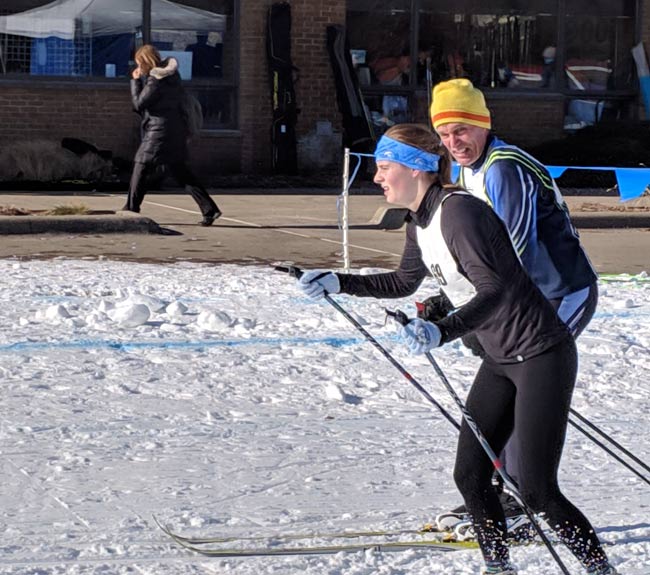 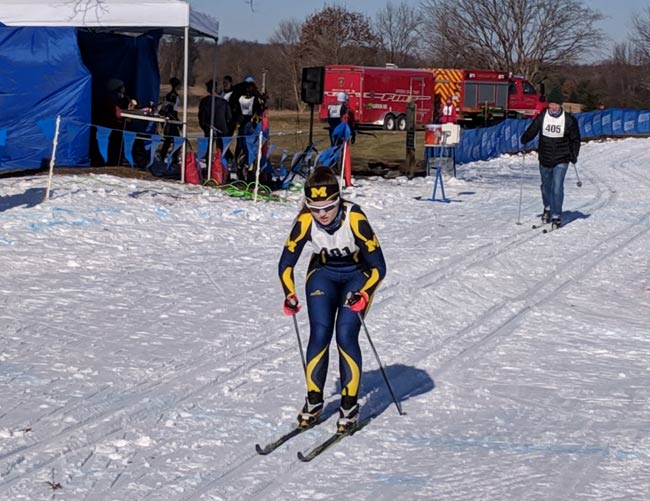 Isabel Carr coming in the finish in the 12km event. Greg Burkhardt in the background.

The course was a 2km loop - the same loop as the Frosty Freestyle. The course was doubletrack in both directions from the start/finish area to the loop in the woods, and triple tracked in the woods. Tracks were in great shape, although the inside tracks in the sharper corners were gone by the end of the first lap.

Many of the top racers doublepoled the entire course, typically using skate skis. Many of the faster racer discovered that the snow between the tracks was faster than the tracks, and skied much of the race out of the tracks.

Jordyn Ross and Lars Hallstrom won the weekend, having posted the lowest cumulative time across the Frosty Freestyle and Krazy Klassic races.Each received a special award.

And Chief of Course and snowmaker extraordinaire Adam Haberkorn skied in his second cross country ski race ever, having raced both the Frosty and the Krazy Klassic! Kudos to Adam, who is now training for the White Pine Stampede!

There are three sets of results in each file below: Overall, splits, and sorted by gender and age division:

Photos from the Krazy Klassic: