The Gobles do well at US Nationals for Michigan Tech

CRAFTSBURY, Vt. – The Michigan Tech Nordic Ski team concluded their first competition of the 2019 calendar year in Craftsbury, Vermont at the 2019 U.S. National Ski Championships. Sophomores Reid Goble and Patrick Acton finished in the top five of Tuesday's (Jan. 8) Freestyle sprint final on the men's side, while freshman Oda Hovland narrowly missed out on racing in the women's Freestyle sprint final. 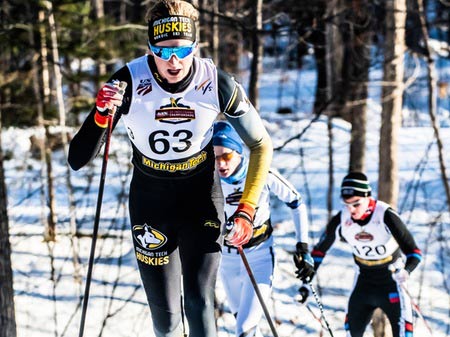 For the women, Hovland placed second in her bracket with a time of 3:42.69, and just narrowly missed advancing to the final with a time of 3:40.15 in her semifinal group. Hovland's time placed her fourth, just 1.48 seconds behind Abigail Jarzin of Northern Michigan.

"We had a bit of a slow start to the Championships with the classic sprint and distance races," said head coach Thomas Smith. "But we certainly finished strong as a team with the last two skate races. We know that we're a bit stronger in skating races, and that we need to improve in the distance races."

Michigan Tech will hit the trails again at the UW-Green Bay Invitational on January 26-27 in Rhinelander, Wisconsin.