Fast skis are something special. Most skiers are emotionally attached to their fastest pair of skis because they are really worth something. Fast skis make a person more "fit" (faster) and they certainly make skiing more fun as well. New skis or freshly stoneground skis have the potential to be your "fastest skis ever". Following this advice will give new skis the best chance possible to reach their potential.

First off, check the skis for blemishes, waves on the base, top sheet cracks, rough spots on the edges, or sidewall dents. Then inspect the base more carefully. Usually new skis or freshly stoneground skis look great, but sometimes they do not. A pair of skis that has whitish and hairy bases or that has more structure on the base than what is desired will simply not run in anything except for really fast conditions or perhaps fairly wet corn snow. If the condition of the ptex is not good, a correction needs to be made or the skis will simply not run well. When it comes to base structure, it is far better to have a structure that is fine and then add more by hand as needed than to have a pair of skis that only runs when conditions are very wet.

Consider where you are going to do most of your skiing (or where you want to have your "best" skis) and compare the base structure to the conditions that you expect to be skiing in. If there is more structure than you want, that is a problem. In that case, I would have the skis stoneground with a finer structure. If the structure looks good, then you're good. If it is too fine, that is OK too as you can add structure by hand.

Once we have established that the skis are in good shape overall and that the base structure and condition is good, we have three objectives: to get as much wax into the base as possible, to replace this soft wax with a hard glide wax, and to remove micro hairs. Toko, Swix, and some other companies sell "base prep" waxes. These waxes are fine for working on skis in general, but it is a simple truth that no single wax has the properties necessary to accomplish these objectives. 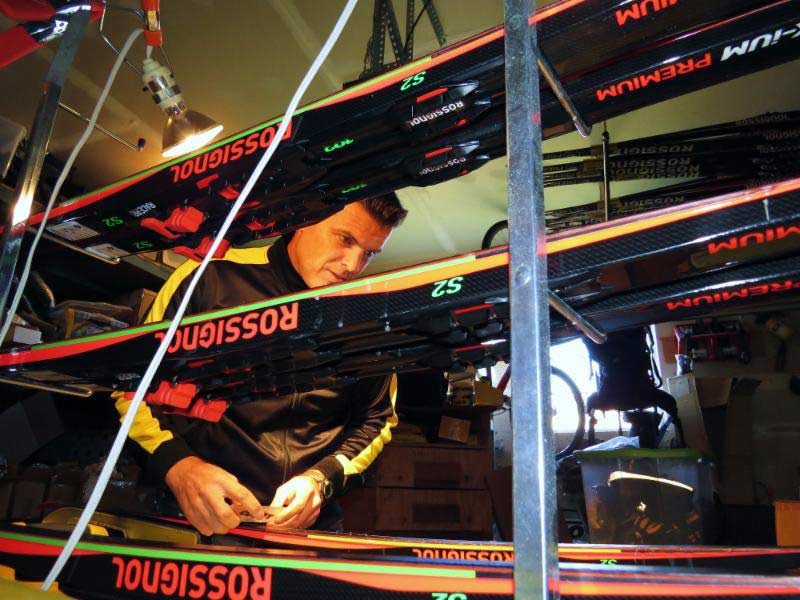 To get as much wax into the base as possible, a very soft glide wax (for warm conditions such as Toko NF Yellow or even better Toko Cleaning and Hot Box Wax) is needed. The softer a glide wax is, the better it will go into the base. The soft wax will penetrate both deeper and at a higher percentage than a harder wax. This is why we apply 5 layers of a very soft glide wax scraping and brushing between each layer. Brush out with a copper brush. The scraping and brushing cleans and "opens" the base allowing more wax to enter. Use a sharp Plexiglas scraper and allow the wax to cool completely before scraping and brushing. Scraping a ski while the wax is warm not only takes wax out of the superficial layer of the base, but it also eradicates structure (which we may have just paid to have had put in). The damage done by a small mistake such as uneven pressure on the scraper or too much pressure on the scraper or a bigger mistake such as having the scraper dig into the base will be magnified when the base is warm (and soft).

If your bases don't seem to be taking in any wax, you might want to have them stoneground. Sometimes by the time you get your skis, those same skis have been hanging around for a long time in warehouses. The base material might be hardened from oxidation. Soon after a ski base as been stoneground is when it is able to accept the most wax, so consider stonegrinding your skis if you don't think they are taking wax like they should be.

The ski bases have now been well-penetrated by a soft glide wax. This is only a half of the job though.

Many of us are familiar with the experience of having glide waxed our new skis 15-20 times with a soft wax only to find that after 5 kilometers of skiing our bases already looked white and unwaxed. This happens because the bases only had very soft wax in them. For this reason, the base material itself became very soft and was not dry friction resistant. Dry friction is especially created by skiing on sharp cold new snow which is commonly found in the first half of a ski season. Before skiing, we still need to utilize the soft wax that is in the base "holding the base open" on a micro level. If we replace this soft wax with a hard glide wax such as Toko NF Blue, the base will be hardened and more resistant to abrasion. We do not simply start with the hard glide wax because, by itself, it will not penetrate as well. We need the layers of the soft wax to get in there and "hold" things open.

Apply 2 layers of the hard glide wax. After each application, allow the wax to cool completely before scraping and brushing. These two layers will harden the base. Scraping and copper brushing out the blue will remove any remaining micro base hairs. Follow these 2 layers the wax of the day. Your skis are now ready to show you what they've got.

At this point, you have just started. Just as important but far more rewarding is the rest of the process. I have found LF Red to be a superb wax for skiing and waxing and making skis faster. So, the next step is to ski a lot and wax with LF Red between each time you go out! Enjoy!