I knew it was going to be wet, but not this wet. The weatherman had promised the light rain would stop for our Rollerski Time Trial and not return until well after we finished, but a light misty precipitation continued to...fall?  Float? It really wasn't that bad, although a few of the 15 racers changed clothes after a warm-up just to be dry for the race.

Team NordicSkiRacer Ricardo Lung and Andy Liebner pulled off the event. Ricardo choose the course and Andy arranged for timing...and tires. If you've been around Andy and rollerskiing for any time at all, you know he's a big advocate of dragging a tire behind you. There are a number of reasons for this, but the main reason today was to slow down skiers in the slippery conditions. Maybury State Park in Northville, Michigan was the site for the time trial, and it was wet and leafy, a slippery combination. 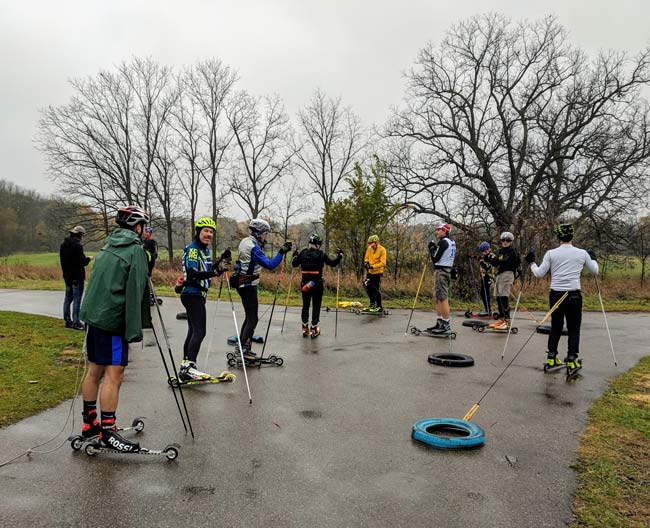 Getting ready to race.

Although Ricardo billed the race as a 10km, the actual distance was almost 15km. (If you ski with Ricardo in the future, note that a "Ricardo Kilometer" is actually closer to a mile. Be warned....)

Of course, we didn't know that until AFTER the race. Those not too far in oxygen debt noticed the distance after the first lap was quite a bit more than 5km....

The course started near the west parking lot off 8 Mile Road, headed south (red line below), turned onto a spur that was out and back to the main trail, hung a right to the next spur that was also out and back, then turned left to return back to the start / lap / finish line. (The original course was to turn right rather than left, to head up the trail marked by the black line on the map. That trail had some construction traffic crossing it, so the course was revised an hour before the race).

The Maybury trail system has some brand new pavement, some older bumper pavement (but still skiable), and some terrible pavement. We stayed on the nicer pavement, which provided nice rolling terrain.

About half of the 15 racers pulled tires. Skiers pulling tires were given a handicap based on the weight of the tire. Andy brought loaner tires, and a couple of people brought their own. Andy weighed all tires to ensure handicaps would be accurate.

The race was interval start. Given the weather, there were few walkers on the trail. The first section of trail wasn't too bad - generally downhill with a few rises, not too many wet leaves. The first spur, however, featured a puddle across two-thirds of the trail that was as slick as ice. Up a knoll and down a gentle hill, you hit a fairly tight curve to the right. In dry weather, you can take this at full speed. Today, it was totally covered in very wet, slippery leaves. Skiers slowed for it, and you could see most of the skiers came out of the corner slightly wide. Yikes for anyone coming the other direction!. Having skied that corner many times, I was able to hold to the inside. 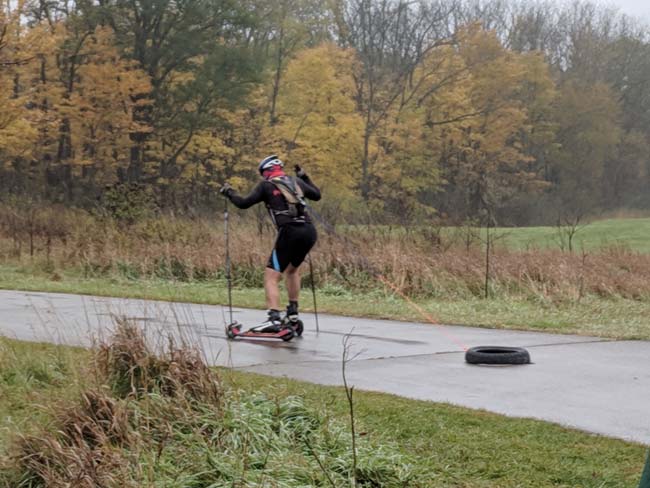 Dragging a tire out of the gate.

Up a short hill for the first turnaround and back around the corner and the slippery puddle, and back to the main trail and a right turn.

The next spur was predominantly (and gently) downhill, with a good climb toward the turnaround point. Turn around, and back down the hill...and then you realized you had a long (but gentle) climb back to the main trail! Dragging a tire through this section of trail...was a drag! 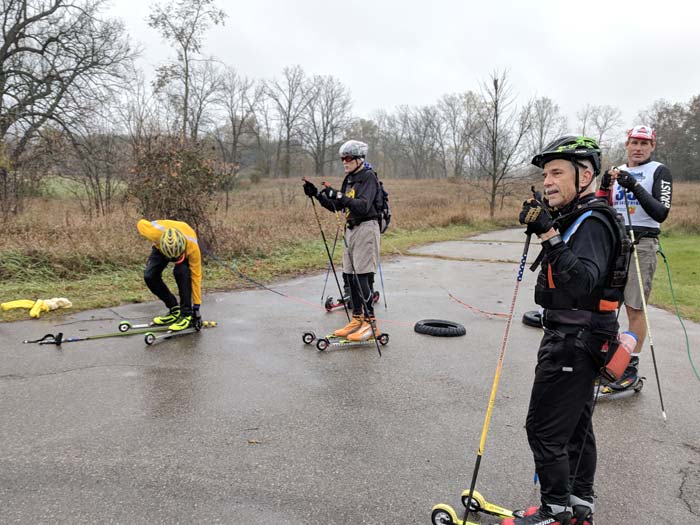 Waiting for our start time.

Grand Rapids Nordic Ski Team's Don Camp was about to catch me at the turnaround point, but I was able to out ski him on the first downhill and a couple other declines to hold him off. He caught me at the end of the spur, but the left back onto the main trail was downhill and I pulled ahead.

The return to the start was mostly uphill, and Don passed me convincingly. Those last few climbs, even though not big, were brutal with the tire. When I reached the lap turnaround, I dumped the tire and skied without for the second lap. I knew that I'd be walking up the hills if I'd been forced to continue dragging the tire. 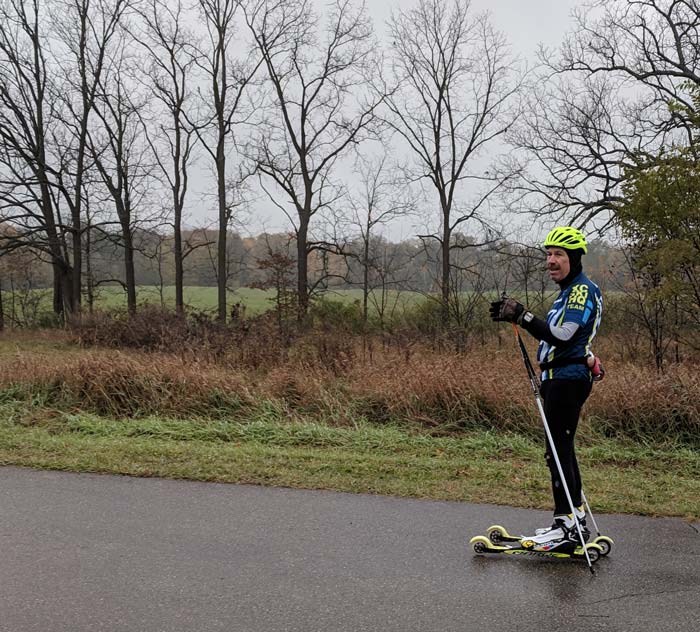 (Full disclosure: I'm pretty out of shape. That second lap was a bit of a struggle. The decision to drop the tire off at the start was a good decision!)

Cross Country Ski Headquarters' Frank Rynalski passed me as he headed toward the finish: he had a scrapped knee. Although he double-poled through the slippery puddle, one ski slipped and he dived into the puddle face first, breaking his ski pole tip in the process! He was the only casualty in the race. And he still beat me overall... 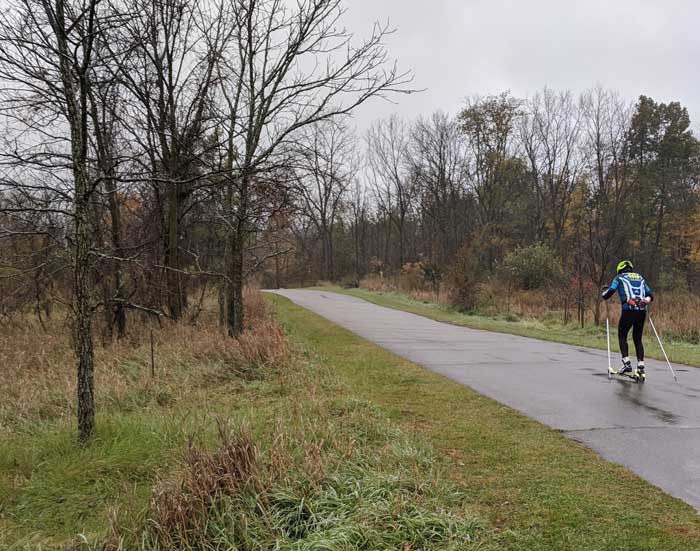 And Frank is off!

Without a tire, I was able to survive the second lap, and almost (almost) caught Don Camp - still dragging his tire - at the finish. That last mile was cold, as I was now soaking wet from the mist in the air. But my boots were dry! I skied on my Pursuit Fork Flex Skate Roller Skis which have awesome fenders. My boots stayed dry even after going through puddles. (The Rollerski Shop sells them separately and you can install them on any rollerski - these are definitely better than any other fender). 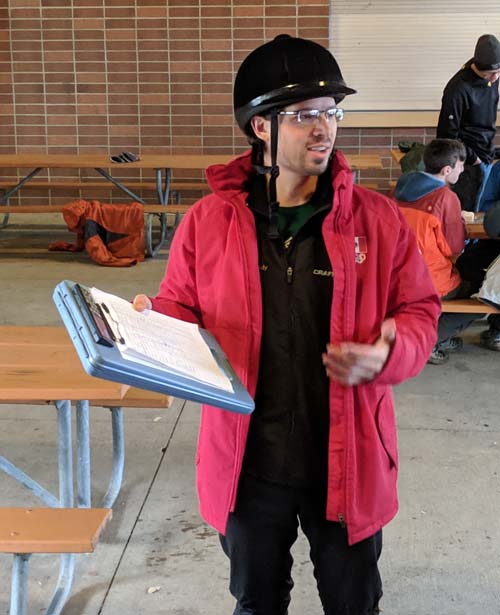 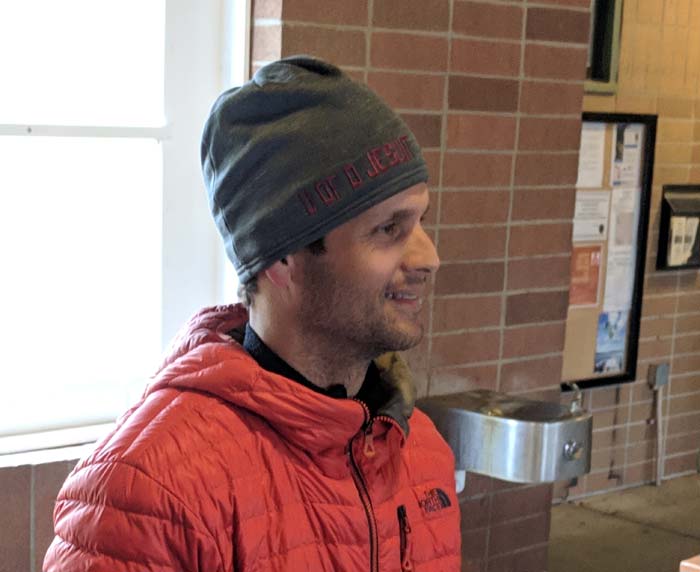 Ricardo, happy for a successful, if wet, Rollerski Time Trial

Thanks to Ricardo and Andy for organizing the event! 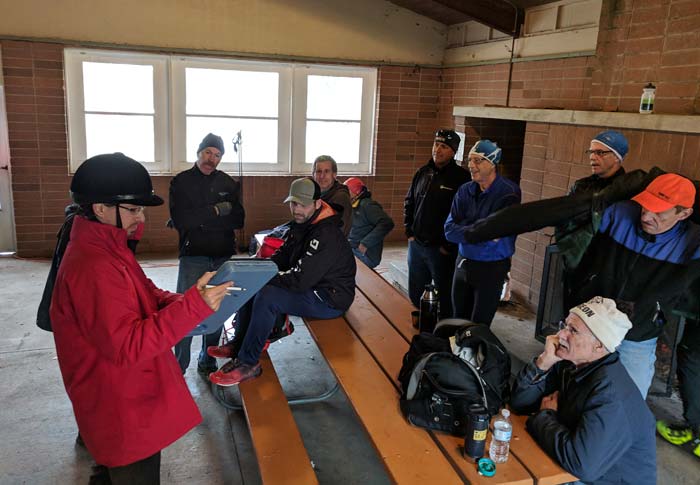 Andy reading off the results. Sure were a lot of GRNST skiers! 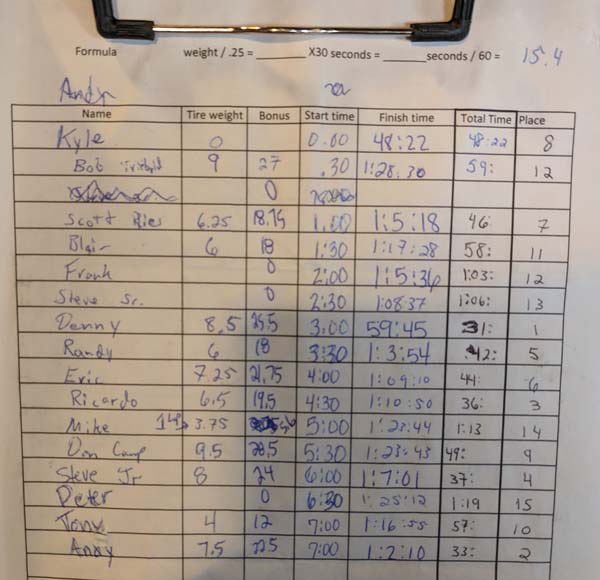