The International Ski Federation (FIS) today officially confirmed that Minnesota will host a World Cup cross-country ski event in Minneapolis in March 2020.  U.S. Ski & Snowboard and the Loppet Foundation will serve as hosts of the World Cup event, taking place at the new ‘The Trailhead’ facility in Theodore Wirth Park.

“A Minnesotan who brought home a gold medal has now helped us bring home the World Cup,” said host committee co-chair RT Rybak. ;“Now it’s time for Minnesota too, once again, show we host big events better than anyone.”

Cross country ski champion Jessie Diggins is a native of Afton, Minnesota, and the first American athlete to win a gold medal in Olympic cross country ski competition; she and teammate Kikkan Randall won the women's team sprint at Pyeongchang earlier this year. Diggins was key to securing this international competition for Minnesota. 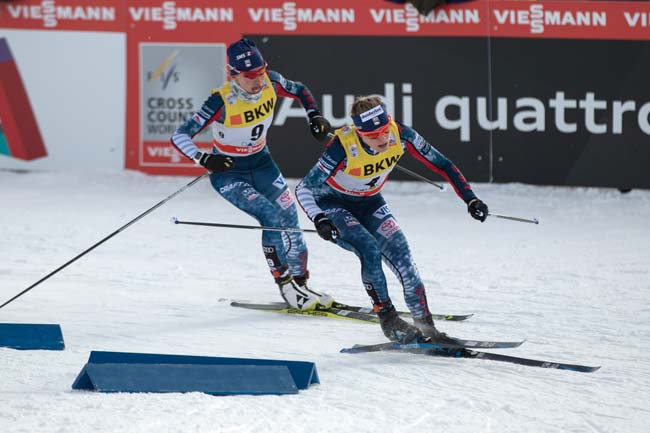 “Hosting a round of the World Cup is our chance to show skiers from around the world how Minnesota embraces winter - through sport and through our hospitality,” said Diggins. “U.S. Ski & Snowboard and The Loppet Foundation are excited to host a world-class competition and share our state with athletes from around the world. We’re equally excited to give ski fans from around the US a chance to see the action up close for the first time in nineteen years! I am so proud to represent Minnesota as one of the first American athletes to win Olympic Gold in cross country, and now to bring the sport I love to the state I call home.”

“When Jessie called me and asked if the Foundation would support her dream of bringing a cross country World Cup event to the U.S., my team and I responded with an enthusiastic ‘yes!’” said John Munger, Executive Director of the Loppet Foundation. “Her ask was a no-brainer for us because we, too, have dreams of sharing this spectacular sport with the world. That’s why we’ve worked hard over the last 16 years to elevate cross country skiing, and adventure sports widely, starting in our own backyard.”

“Everyone at U.S. Ski & Snowboard is delighted that we and the Loppet Foundation are able to formally confirm that the cross country World Cup will be coming back to the USA in March 2020 and to one of the great hotbeds of cross country skiing in Minneapolis,” commented Calum Clark, Chief of Systems and Operations for U.S. Ski & Snowboard. “A lot of hard work has gone into making this announcement possible, from the Loppet Foundation team in Minneapolis to the International Ski Federation (FIS), but none more so than from Minnesota’s own Jessie Diggins and the whole U.S. Cross Country Ski Team whose efforts, especially in the 2018 Olympic Winter Games, were the catalyst for the compelling concept to bring the world’s best cross country skiers to the city of Minneapolis.”

On the heels of successfully hosting Super Bowl LII, the WNBA All-Star Game, and now preparing to host the NCAA Final Four, the FIS Cross Country Ski World Cup event is yet another in a string of world-class sporting events to choose Minnesota as host.

“The Loppet has helped put Minneapolis cross country skiing on the map, and Theodore Wirth Park offers the best trails in our state,” said Mayor Jacob Frey. “Hosting a round of the Cross Country Ski World Cup is yet another chance to showcase how to do winter right and for our city to shine as we show the world that Minneapolis welcomes everyone with open arms.”

“Minnesota is the perfect host state for a cross country ski racing World Cup event,” said Beth Helle of Explore Minnesota. “Minnesota boasts more than 2,000 miles of cross-country ski trails, and the sport is integral to our winter tourism industry. Winter accounts for 24% of tourism expenditures in Minnesota, and our high-quality, groomed ski trails help ensure that skiing-related destinations and businesses are able to thrive throughout the winter months.”

Nearly a decade in the making and just opened this summer, The Trailhead is part of the Minneapolis Park and Recreation Board’s Master Plan for the park and the Loppet Foundation’s long-term vision for making lifetime endurance sports more accessible for their local community. This year-round hub for outdoor adventure will host competitive races, community events, and now an international ski competition right in Theodore Wirth Park; solidifying Theodore Wirth Regional Park as a world-class cross country venue.

More information on the World Cup event, including how to secure tickets and see the competition in action, will be available on the local organizing committee’s website, www.mnworldcup.com, or on Facebook, Twitter and Instagram @mnworldcup.