Going into this 50K Freestyle at the Noquemanon, I had one main thread in mind: Prepare to reserve energy. That means to race with the mentality to reserve energy. My last 50K took place in West Yellowstone, Montana in 2010 after a series of 7 ski marathons in 7 consecutive weeks. This past weekend I knew I could handle just one, despite the 8 year gap and absence of the great volumes of training in those days.

The strategy I used in those days carried me well this weekend. It felt so familiar, ski in the crowd, keep a peripheral eye on personal space, stay calm through every stride especially for the first 5K while the body warms up and don’t lose contact with the front runners. I always bring a drink bottle and carry energy gels in my pockets and consume some at the feed stations every 5K or so. 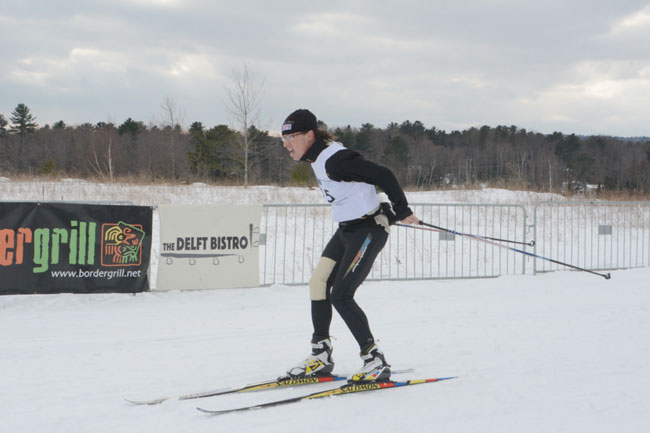 With several hundred in the race I was hanging in the top 10 over the first 5K, waiting and in reserve. Having lived in Marquette before, I knew the course and it’s importance to watch competitors techniques on the uphill and downhills through the first few hills to gauge safety and speed abilities in the larger hills after the 5K mark. I realized early in the race that I had few rivals to worry about and took the lead before the larger hills came so I could relax more on the downhills. It’s always good to get in behind someone to increase your speed by their draft too, but beware of their potential crashing could ruin your day.

I spent the majority of the first 25K skiing with 3 other guys, and we each took turns taking the lead. For a while the three of them got away from me as they surged. I let them go to take a recovery feed out of my drink belt. This has happened before and I knew I could make up more time by taking corners as close to the inside edge as possible and other power increase tricks using the course profile knowledge to my advantage. By the 25K mark, I had resumed the lead and hit the accelerator while they all stopped at the feed station.

I used those downhills again to my advantage by skating without poles and riding a low tuck in the tracks. For a solid 7 kilometers I was free and clear out of sight from everyone in my race.

That was until my legs cramped up.

Since I use a significant disproportionate use of my legs over my arms in skating, I was forced to double pole the following 3 kilometers. This really helped clear the lactate and helped me relax again. One skier caught up to me, passed, and put some distance on me until, until it looked like he was starting to cramp as well. For the remainder of the race, I watched my energy use with every stride to carefully prevent a reoccurrence of cramping, and consuming energy drink as much as possible. We took turns leading and were in too much pain to successfully gap each other by any significance.

The trick when your drink bottle runs empty is to open the cap prior to a feed station and yell ahead for the volunteers to dump all their drink cups full of fluid into your bottle and take it to go! My youthful challenger did not carry a drink bottle. That’s how it’s done folks, I took my final drink to go and out sprinted my rival to win the 50K Freestyle at the 2018 Noquamenon.