Forecasters at NOAA’s Climate Prediction Center issued the U.S. Winter Outlook today favoring cooler and wetter weather in Southern Tier states with above-average temperatures most likely in the West and across the Northern Tier. This year’s El Niño, among the strongest on record, is expected to influence weather and climate patterns this winter by impacting the position of the Pacific jet stream.

“A strong El Niño is in place and should exert a strong influence over our weather this winter,” said Mike Halpert, deputy director, NOAA’s Climate Prediction Center. “While temperature and precipitation impacts associated with El Niño are favored, El Niño is not the only player. Cold-air outbreaks and snow storms will likely occur at times this winter. However, the frequency, number and intensity of these events cannot be predicted on a seasonal timescale.” 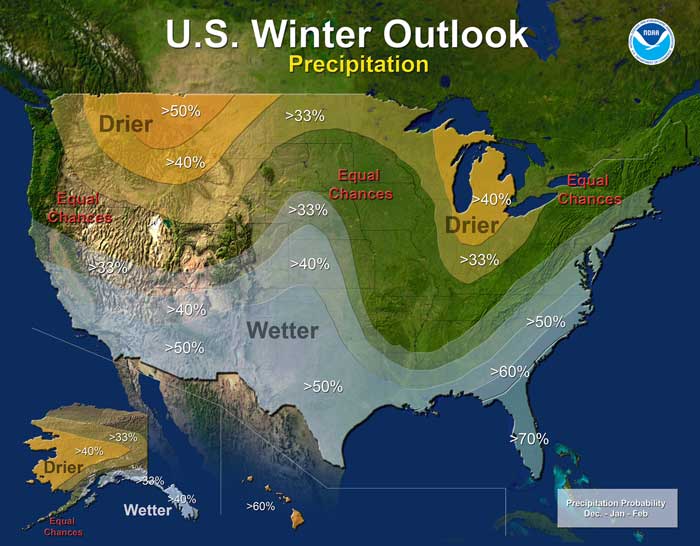 Wetter-than-average conditions most likely in the Southern Tier of the United States, from central and southern California, across Texas, to Florida, and up the East Coast to southern New England. Above-average precipitation is also favored in southeastern Alaska.

Drier-than-average conditions most likely for Hawaii, central and western Alaska, parts of the Pacific Northwest and northern Rockies, and for areas near the Great Lakes and Ohio Valley. 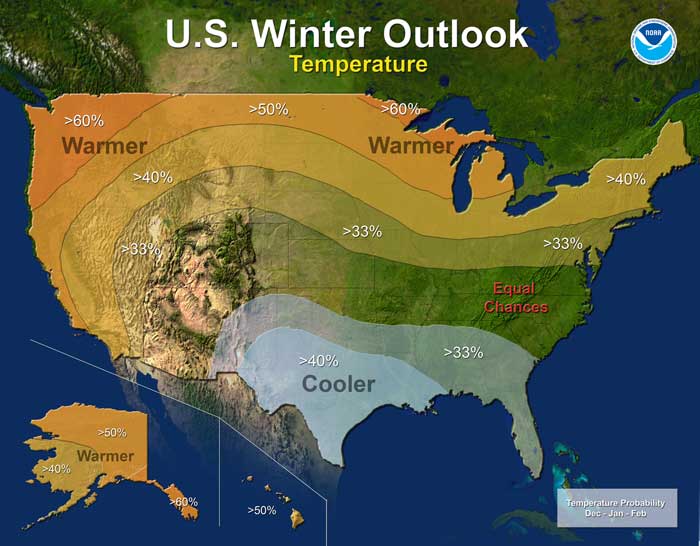 The U.S. Drought Outlook shows some improvement is likely in central and southern California by the end of January, but not drought removal. Additional statewide relief is possible during February and March. Drought removal is likely across large parts of the Southwest, while improvement or removal is also likely in the southern Plains. However, drought is likely to persist in the Pacific Northwest and northern Rockies, with drought development likely in Hawaii, parts of the northern Plains and in the northern Great Lakes region.

While it is good news that drought improvement is predicted for California, one season of above-average rain and snow is unlikely to remove four years of drought,” said Halpert. “California would need close to twice its normal rainfall to get out of drought and that's unlikely.”

This seasonal outlook does not project where and when snowstorms may hit or provide total seasonal snowfall accumulations. Snow forecasts are dependent upon the strength and track of winter storms, which are generally not predictable more than a week in advance.

NOAA produces seasonal outlooks to help communities prepare for what's likely to come in the next few months and minimize weather's impacts on lives and livelihoods. Empowering people with actionable forecasts and winter weather tips is key to NOAA’s effort to build a Weather-Ready Nation.

NOAA’s mission is to understand and predict changes in the Earth's environment, from the depths of the ocean to the surface of the sun, and to conserve and manage our coastal and marine resources. Join us on Facebook, Twitter, Instagram and our other social media channels.