Take a race car mechanical engineer, a cross country ski coach, add an endurance athlete who happens to be a patent attorney, and what do you get? A unique rollerski featuring a patented rollerski suspension system. The Suspension Roller Ski patent claims: 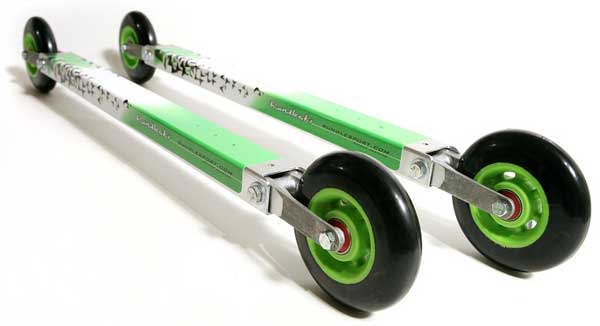 Rundle Sport, Inc. was founded in Canmore in Alberta, Canada by Hugues Wanlin, Alain Parent, and Andrew Hicks. Hugues Wanlin worked at Delphi in Research and Development before starting his own company, Bow Valley Technologies. The Rundle Suspension Rollerski was actually his second patent (a "solenoid actuated fuel injector having a pressure balanced pintle" was his first).

Alain Parent is the Program Director and Learn to Compete 2 Coach for the Canmore Nordic Ski Club, is Certified at Level 4 in the National Coaching Certification Program. He has been involved in many high performance competitions including coaching at twelve Junior and Senior World Championships and the 2002 Salt Lake City Winter Olympic Games. Alain has also delivered dozens of coaching courses across Canada.

Andrew Hicks practices intellectual property law in Canada. A former partner with a major Canadian law firm, Hicks founded the Hicks & Associates firm in 2006. In his spare time, he is an active sailor, cross-country skier, tri-athlete and cross-country skiing race official. He has completed numerous Ironman and half-Ironman triathlons and has been involved at a senior level in the organization of the recent World Cup cross-country skiing events in Canmore.

I gave them a call and asked if I could get a pair of Rundle Sport RS-10 Suspension Rollerski so I could write a review. Managing Director of Rundle Sport, Lucas Jungmann (also a skier) graciously agreed to loan a pair for testing.

The Rundle Sport RS-10 Suspension Rollerskis use dampers, front and rear, in conjunction with a fork that rocks, to provide a customizable suspension ride. It's easier to simply show the video of the rollerskis in action:

Rundle Sport offers various dampers for adjusting the stiffness of the suspension. When you order, you provide your weight so they can provide the proper damper:

Here's what the dampers look like (photo from Rundle Sports web page): 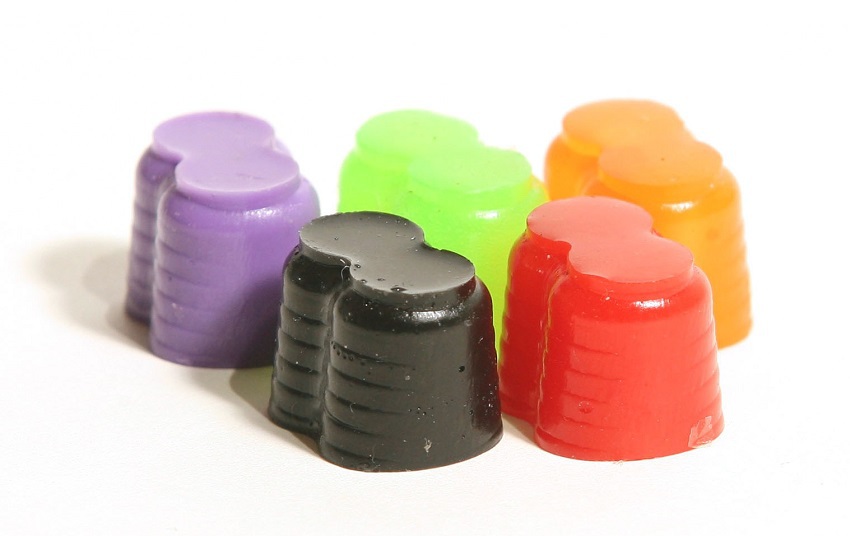 Here what the dampers look like when installed in the rollerski body in this cutaway frame that Rundle Sport provided: 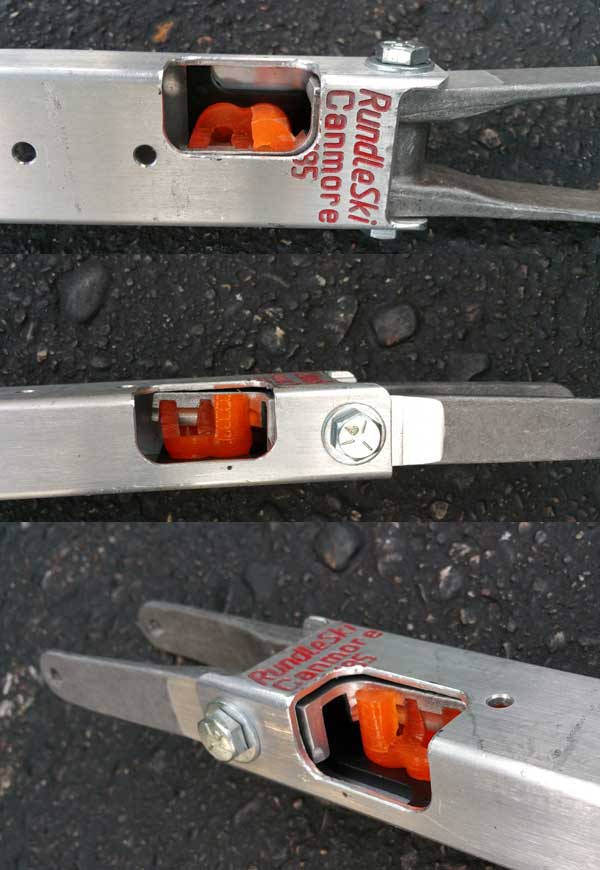 As you can see, the fork pivots on an axle. The damper cushions the part of the fork inside the frame that acts as a lever.

Rundle also sells packages of dampers so you can custom-tune your rollerski as conditions or body weight change. I did not attempt to take the Rundle rollerski apart to access the dampers.

I was provided the Purple (stiff) dampers that were appropriate for my weight. (If this had been 5 years ago, I would have received the Red medium dampers. I need to lose some weight...). Due to temporary stock limitations, only rear fenders were on the skis. Holes for the front fenders had been predrilled. 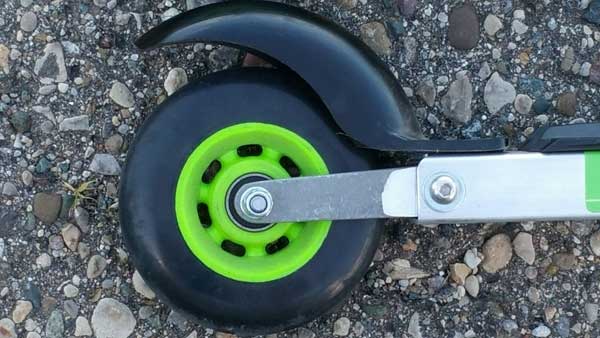 Fender on the Rundle Sport RS-10

I told them they could provide either Salmom or NNN bindings since I had skate boots for both. They sent NNN. The skis do come predrilled for either binding system, which is great for skiers who don't live near a ski shop and have an extra set of bindings available.

The rollerskis come in two wheelbase lengths: 580mm or 610mm. Choose the shorter shorter 580mm wheelbase if you're a less experienced skier, new to rollerskis, or want a more stable rollerski; shorter rollerskis are more maneuverable making it easier for a new rollerskier to get comfortable on rollerskis. The longer length better replicates the swing weight of a real ski, so has a more ski-like feel at the cost of lower stability. For testing, I was provided the longer 610mm rollerski. 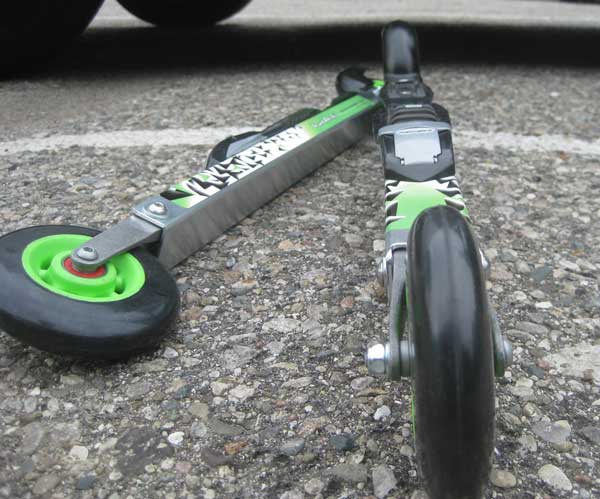 Front and bottom view of the RS-10

Rundle Sport claims their wheels are the most durable 100mmx24mm on the market. We'll see how they wear over time. They also offer a fast "race" wheel that they recommend for both racing and coaches. (This a jab at out of shape coaches? I found it humorous!)

I tested the skis on a wide variety of terrain (flats to steep hills) and pavement type (from brand new ultra-smooth blacktop to gnarly distressed tarmac consisting of exposed aggregate, cracks, and small holes - the kind of pavement you'd avoid on your road bike. I rollerskied at Kensington Metropark, the Kensington to Milford connector trail, and the bike path and roads of Maybury State Park (these places are all in southeast Michigan). All told, I put in several hours of skiing before writing this review including some long-slow distance, hard fast intervals over rolling terrain, and speed work. I also skied on damp (but not soaking wet) pavement.

Overall, the Rundle Suspension Rollerski provided a smooth ride. The suspension absorbed bumps easily - I was able to roll through shallow holes in the pavement that I would have avoided on my non-suspension rollerskis. Instead of falling into holes - such as pavement cracks - the rolleski roll through and over. Over harsh pavement, the suspension reduced the vibration that make your feet feel like they are going to sleep. The suspension allows the skis to hug the pavement, providing firm contact over rougher surfaces. Like other 100mm diameter wheels, the rollerskis fairy easily rolled over small twigs and bumps. 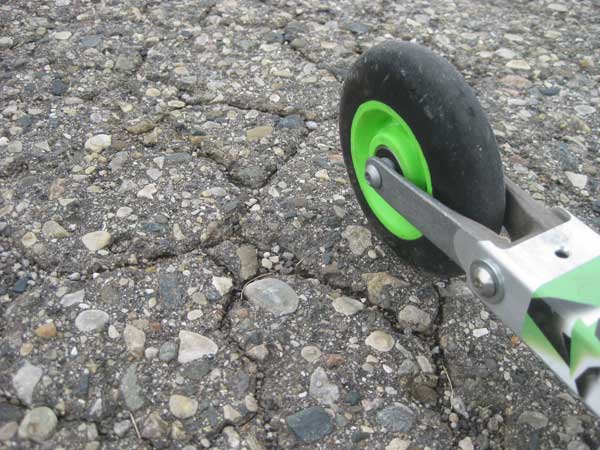 Team NordicSkiRacer teammate Tony Percha could easily see the suspension in action while we were our training one weekend morning.

The first time I went down a hill, I was surprised how fast the rollerski seemed. It turned out to be an illusion (in part): the Rundles were not any faster than a Marwe 610 or Pro-Ski. Instead (and I never ever expected to talk about this), the skis had a low breakaway speed: The high quality bearings allow the ski to accelerate up to speed quickly. In action, this led to quickly jumping into a lead over Tony's Marwe's on a downhill, but once at speed, the gap between us remained constant: we were travelling at the same velocity. (If only could take this feature and add it to my cold snow skis...)

The Rundle's tracked straight as arrows - there was no discernable pull one way or the other that is typical of many rollerskis. I assume this is because they use their Rollerki Wheel Alignment Tool on all the rollerskis they sell. The rollerskis tracked very predictably down fast hills and around corners. I did feel slightly wobbly when I tried to aggressively skate DOWN a fairly steep hill, but I attribute that more to the looseness of the D-width Fischer skate boots on my narrow B-width feet and shifting my weight a little too far to the outside.

Snowplowing on the RS-10's was similar to other 100mm diameter wheeled rollerskis - you just need a wide stance (wider than on snow skis). I would have liked to have tried snowplowing on a rougher downhill but didn't think about it in time to try it. My bet is the Rundle's will handle the job better then fixed-frame rollerskis.

Like other 100mm rollerski wheels, beware painting lines when the pavement is wet...

At the beginning of this review, Rundle Sport made two claims. What did my road test show?

Claim 1: "The suspension system allows roller-skiers to undertake roller-skiing on rougher pavement, asphalt or the like by reducing stress and/or discomfort to the roller-skier."

I would argue the claim is true. I thought the Rundles took the edge off rough pavement and would be a more comfortable ski than a fixed-frame rollerski. The Rundles do not absorb bumps and rough terrain anywhere near like the Jenex Aero XL150S Skate rollerski with it's 150mm diameter pneumatic wheels, so if you have really rough roads or want to rollerski on gravel roads, go with  pneumatic wheels. But if you have moderately bumpy roads, the Rundle RS-10 Suspension Rollerski will help smooth out the bumps with higher stability and lower weight.

Claim 2: In addition, the suspension system provides a skiing experience that more closely resembles skiing on snow by returning energy back to the skier in a manner similar to the effect that the camber of a snow ski provides to the skier.

I think claim 2 is true as well. I could feel the suspension working, and I felt there was some energy returned. It's a subtle feel, but it's there.

Overall, I liked the Rundle Sport RS-10 Suspension Rollerskis. I liked them enough that I asked Rundle Sport if I could buy them. After a little horse-trading (full disclosure), I now own them and they now advertise of NordicSkiRacer.com!