Toko has introduced new versions of Helix and JetStream, and has updated the application method. Take note! 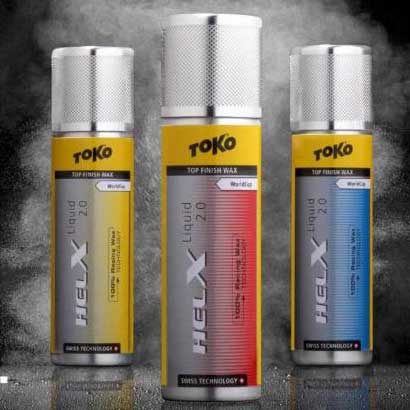 Application is different from the old HelX!

Spray on HelX evenly throughout the base. Let it dry for a few minutes. Ready to go!!

Avoid corking and polishing: the finish is as good as it will get. An "unfinished" HelX 2.0 application is smoother and "more finished" than a polished old HelX application. This is because the HelX 2.0 is extremely fine (small particles) making it both faster and more durable (gets "into" the base more and is more difficult to "knock off"). Because HelX 2.0 is far more durable, it is now viable for all Nordic races - far more than the last version.

Liquid topcoats such as HelX 2.0 are generally a disadvantage in dirty snow

There are many ways to apply JetStream 2.0 much like any other bloc or powder product.

The application is similar to the previous JetStream products except that if ironing, the iron temp needs to be hotter (160c+).

This technique was tested for use in dry powder snow, wet new snow, and both clean and dirty corn snow. Testing included multiple testers using a blind testing method over many testing days including dramatically different conditions (all of the main conditions covered) with double blind skis (there were doubles of the same wax and preparation methods so as to expose inconsistencies).

We tested it for durability and dirt resistance as well as without skiing it in and it was as good or better as all other methods in any condition which is noteworthy because some methods are better in some kinds of snow than others.

We are comfortable recommending this method for all Nordic ski racers from weekend warriors to the highest level.

We are assuming that the skis have had the appropriate HF wax applied, scraped, and brushed out well.