A cold ride for a good cause in Nashville

Sunny, warm Nashville. a week ago, the day warmed quickly to 81. The average for this time of year is 46F for the low, 69F for the high - not bad bicycling weather.

So how come it was 32 degrees with 20 mph winds today?

My brother in law, Steve, a friend of his, Jim, and I have been riding in the JDRF ride to raise money for research into a cure for Type 1 diabetes for the last several years. The last three years, we did the Vermont ride in the summer. Wanting to try something different, we choose the Nashville route this year. 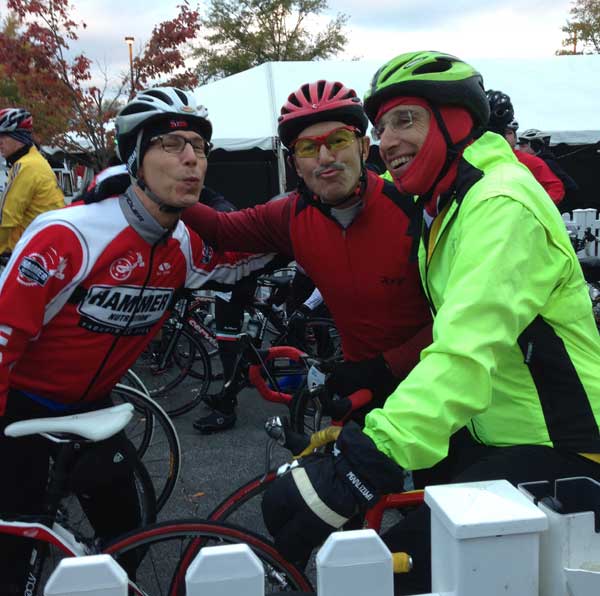 Right to left: Me, Steve, Jim

As I stood at the start (fortunately, protected from the wind) I thought about our choice...

"We've done Vermont three times. Awesome roads, but don't you think it's time to try one of the other rides? I don't think I want the heat of the Death Valley ride. Lake Tahoe would be great, but that's a long way to travel. Wisconsin? Too much like Michigan. But we've never been to Nashville..."

We're rolling to the cheers of family and friends out bracing the cold. I have some experience riding in the cold from years back, but the bike is usually put away in favor of rollerskis long before November 1, today's date. Thank goodness for booties and lobster gloves! 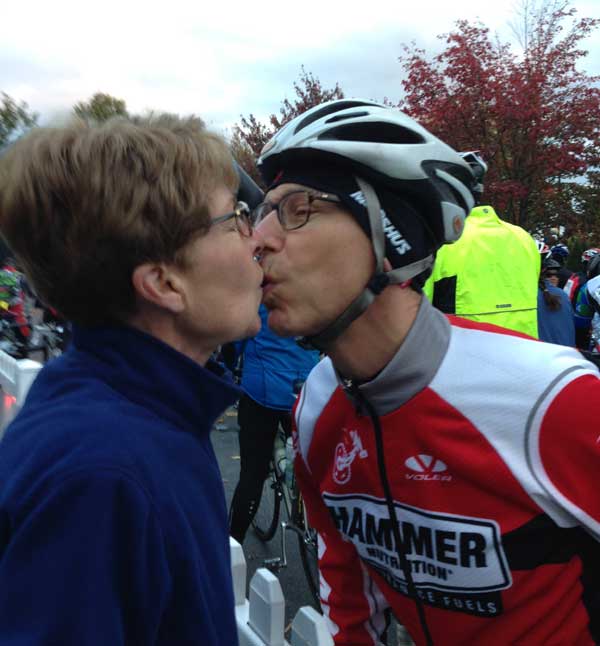 Jill kissing me goodbye, not sure if I will freeze to death before I see her again...

I'm actually worried that I overdressed. Nothing is worse than sweating in the cold, then stopping. Think after a cross country ski race - you either have to keep moving, put on dry clothes, or grab warm-ups.  Steve's gloves look pretty thin. Within a mile, his hands are cold, and will be until the rest stop when Jim pulls out an extra pairs of glove covers.

The key was to stop quickly, grab food and water, and get on the road before we cooled off. We all felt great. I was a little warm on the out so removed my jacket.

Good thing: in the next stretch I felt great, jumped behind a downhill-bound tandem, and took off. A mile or so later on a climb, the tandem fell away and I started picking off groups of riders. 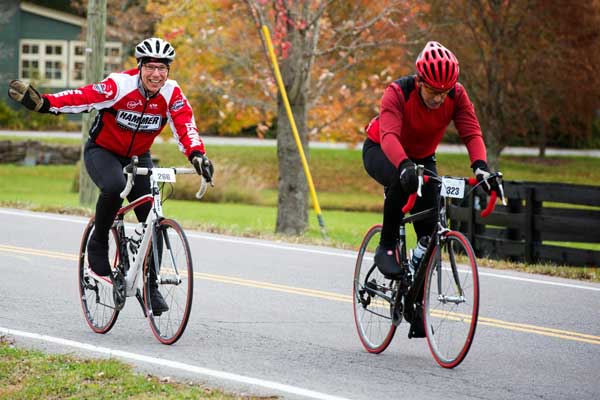 Waving to the camera; Steve thinking, "What am I doing out here..."

We had a backup plan for this ride. Both my wife, Jill, and sister, Jesse, had minivans and were our personal sag wagons, staffed by my niece and Jim's daughter Maxine and Antonia. With the cold, we initially joked that we'd ride around the parking lot for pictures, then head to the indoor pool. Jim was in fabulous shape. Me? Not too bad. Steve? Steve hadn't been on a bike in three months, had back issues, and was looking to suffer. We assumed Steve would beg for mercy and would have to end early.

At the second rest stop, I was far ahead of Steve and Jim. I jumped in the car with Jill and drove back to harass them (and to stay warm). The priceless looks when they saw me rooting for them from a car window!

Back at the second rest stop, we regrouped, and "Yes Steve, I had not abandoned and yes, you had to keep on riding. too."

November 1 is not the best time to ride for a less than dedicated rider. It gets dark early in October and it's harder to get motivated to get out on the bike. And October rain killed even that motivation. Maybe we should have chosen a ride a little earlier in the fall... 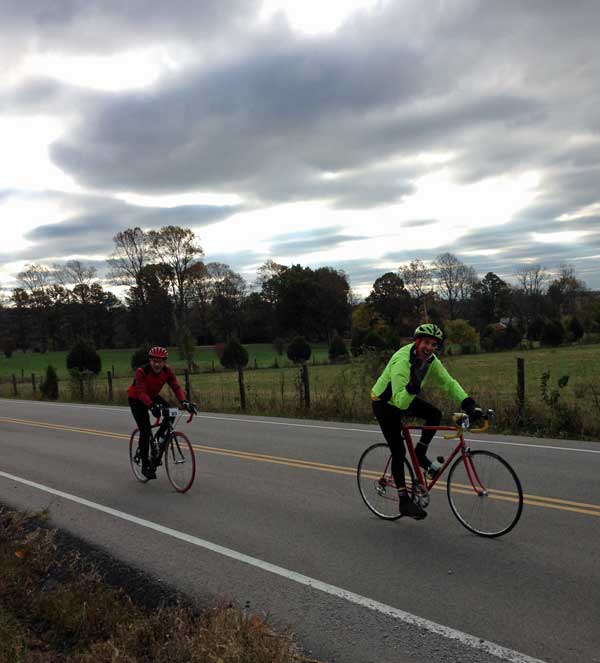 We hung out at the rest stop a little too long and I started shivering. On went the jacket. That turned out to be a good decision. We'd been riding mostly with the wind or quarter to the wind. This next segment had sections directly into the artic breeze. I was VERY happy to have a nice warm jacket. Even with the jacket, I could definitely feel ths chill against my chest.

The roads were awesome: Low traffic, few cracks or holes, nice hills, beautiful scenery. On the way to rest stop 3, we road onto the 444-mile long Natchez Trace Parkway, a limited access road running from Nashville to Natchez, Mississippi. That shorter, steeper climbs and descents turned into longer but gentler ascents and declines, with even less traffic. It was awesome!

At rest stop 3, I assumed Steve would stop and Jim and I would continue. Not going to happen - Steve's too competitive. All three of us continued on. I'd pretty much blown up between rest stops 2 and 3 was was now just holding on. Jim still felt fresh and abused us by riding off the front end just far enough so he was usually in sight but irretrievable. At 50 miles, the official turnaround point for the 100 mile out-and-back ride, we turned into the 4th rest stop, which turned into a quarter mile climb. Cold and wet, Steve and I abandoned the bike for a nice warm minivan. Jim, being in better shape, turned around and headed back.

We met Jim at the next rest stop. Heading back meant heading north directly into the wind. He'd had enough as well and we headed back to the hotel, ride headquarters, and a nice warm shower.