The Function of Blue vs. Black: Toko HF and LF DLC Glide Waxes

Generally the glide wax that comes under the HF Layer of the day is either LF Blue or LF Black. If the snow is cold (snow temperature below 15f), we go with LF Blue for our base glide layer.  If the snow is a bit warmer (snow temperature of above 15f), then we go with the LF Black (DLC) for our base glide layer.  Why is this?  When the snow is cold, a major challenge is minimizing dry friction from the pe base sliding on abrasive sharp dry snow.  A very hard wax such as LF Blue is very good at this.

LF Blue, due to it's hardness is also super durable and dirt resistant.  LF Black is far softer than LF Blue and thus is great when the snow becomes a little warmer (all the way to very wet) and the base wax also needs to address water.  LF Black is a great base wax when we need to address dirt, durability, static, AND free moisture in the snow.  LF Blue addresses dirt and dry friction which is what can be found in very cold snow. 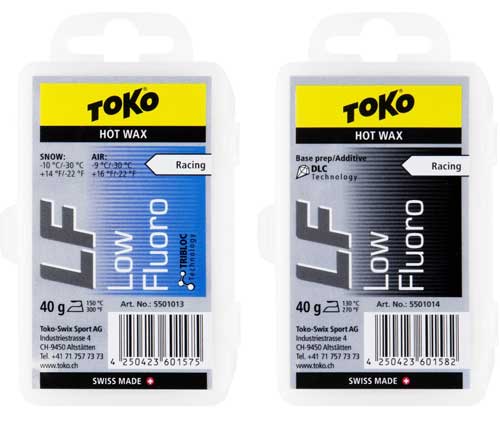 HF Blue is an outstanding cold wax.  Due to its hardness and fluorine content, it is very fast in a broad range of cold conditions and durable and it minimizes the negative effects of a dirty track very well.  This is our go-to wax in all colder conditions (straight or with XCold mixed in when it is cold and slow).

The softer HF Black (DLC) is a more specific wax designed to combat the tricky condition where dirt and water are present.  Normally a soft hydrophobic wax such as yellow is most effective in wet conditions. However, these soft hydrophobic waxes are poor in dirty conditions.  They pick up and drag on the dirt, the ski base gets dirty, and then the skis are slowed down by both the dirt on the base as well as the water because the dirty bases no longer are effective in minimizing the suction effect.  The key is to go with HF Black in these conditions.

While HF Black is not as hydrophobic as HF Yellow, it is far better at keeping the skis clean and more durable while still being reasonably hydrophobic.  For this reason, we use HF Black in dirty conditions where the snow temperature is above 15f-20f (especially races longer than 5km where dirt resistance becomes more important). 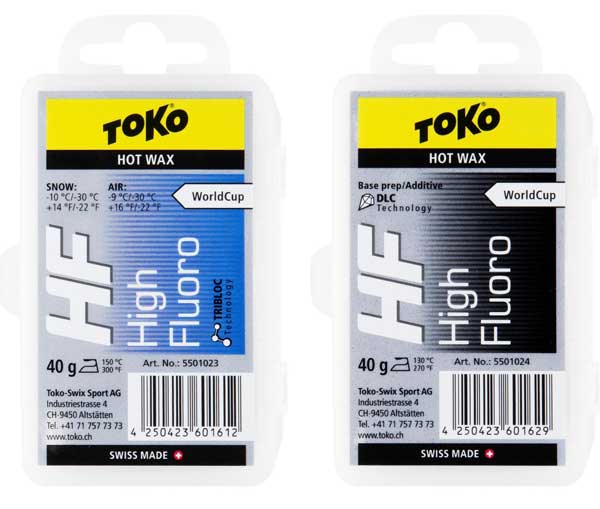